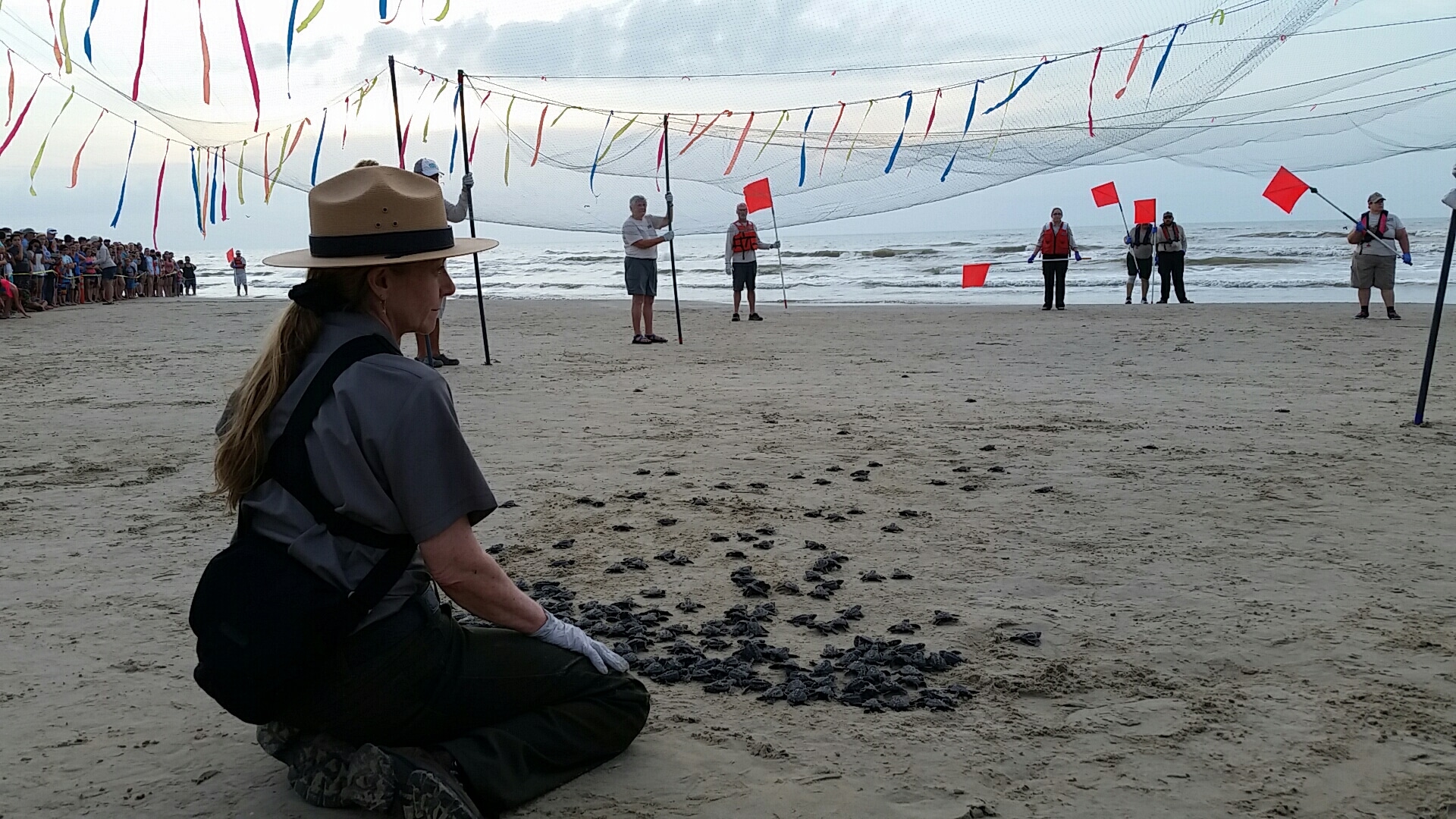 When young university student, Donna Shaver arrived at Padre Island National Seashore in 1980 from Syracuse N.Y., she fell in love with both the ocean and saving an endangered species. “I had never seen the ocean or a live sea turtle before,” remembers Donna Shaver, reflecting on her first day as a volunteer with the National Park Service while studying at Cornell University. “My boss cautioned it was unusual, but that first day we collected two live-stranded turtles and took them up to a rehabilitation facility.”

As a Student Conservation Association (SCA) volunteer, Shaver was assigned to work on a groundbreaking project to help save the quickly disappearing Kemp’s ridley sea turtles. Upon graduation, Shaver took inspiration from her father, a Naval Academy graduate, and spent her first several years at Padre Island as a seasonal employee before joining the National Park Service on a full-time basis. By 1986, she became the acting chief of resources management, leading the recovery program for the most endangered sea turtle in the world. “She is a pioneer in the protection of this species,” said Martha Villalba-Guerra, one of Shaver’s employees.

Recalling her SCA internship over 40 years ago, Shaver says, “It changed my career and my life.” Dr. Shaver truly reflects the outcome from the SCA mission, “to build the next generation of conservation leaders and inspire lifelong stewardship of the environment and communities by engaging young people in hands-on service to the land.”

During the early years of her career, Dr. Shaver discovered most doubted the Kemp’s ridley sea turtle species recovery. But she believed in the premise of the original project that the location of their birthplace (the Padre Island nesting grounds) was imprinted upon project turtles who were caught there upon hatching, raised and later released from Galveston into the Gulf of Mexico.  Establishing the Padre Island nesting ground was important as a secondary protected site in the United States to Rancho Nuevo in Tamaulipas, Mexico. The entire experiment rested upon a once controversial idea that female sea turtles would return to the beach where they were born to spawn.

Even as years went by without any growth in the number of nests on Padre Island, Shaver continued stressing patience. She understood the sea turtles needed time. In fact, the original project turtles did not return for a decade, but in 1996 the first of tagged turtles finally returned to nest and lay eggs.  “Some of the turtles that I incubated from 1978 to 1988 have come back and laid their eggs and I have incubated them as well,” Shaver later explained to ABC News. “Mother hen, grandmother hen.”  Quite a feat even if you consider a couple thousand eggs per year were brought up from Mexico over those ten years, with the total number of eggs exceeding 22,000 eggs.

Dr. Shaver understood the vital importance in gathering accurate data about the migratory habits of the sea turtles to fully save the species.  “No one really understood where the turtles went when they weren’t nesting,” said Shelby Walker, a National Park Service biological technician. Shaver brought understanding through data about turtle migration patterns gathered from satellite tracking in the 1990s.

Using satellite data, Shaver discovered local shrimping was largely responsible for interfering with sea turtle foraging through the Gulf of Mexico. Her findings lead to legislation that protected turtles from shrimping near Padre Island and enforced the use of turtle extraction devices (TEDs) in fishing nets, providing an escape hatch for turtles caught up in nets unintentionally.  Today, DNA testing further confirms multigenerational turtle hatchlings have returned to Padre Island from the original hatchlings.

“Her dedication to sound science is unparalleled,” Walker said. “She honestly cares about getting things right and getting the right information and getting it out to the world so that it can help the sea turtles.”

Shaver works tirelessly to ensure the safety of the sea turtles. Every year, she and her team train approximately 100 volunteers from the local community to assist in combing beaches looking for nests. When volunteers locate nests and discover eggs, the eggs are brought back to an incubation room or a screened enclosure.  Safe from predators like coyotes, the eggs are monitored and protected until hatched and the small turtles are later released.

Dr. Shaver’s labor of love is infectious, encompassing everything from leading volunteers patrolling nearly 40 miles of seashore to locate nesting turtles, sleeping on a cot just feet away from incubating eggs while waiting for turtle hatchlings to emerge, to educating the public about the importance of sea turtle conservation and their plight during daybreak turtle releases.

“I believe the work that Donna Shaver has done over her career has helped save this species from extinction,” said Cynthia Rubio, a supervisory biologist who works with Shaver. “Without her dedication, this species would be much worse off.” Rubio, who described Shaver as inspirational, and passionate about her work, said, “Rain or shine, if things go good or go bad, she’s always here, and I know she’s going to dedicate the rest of her life here too.”

Donna Shaver is known for her significant impact in the recovery and conservation of the Kemp’s ridley sea turtle, bringing the species back from the brink of extinction, once as few as 300 nesting females but now 7,000 – 9,000 worldwide. Even after 40 years of research and achievement, her lifelong mission continues to be the preservation of sea turtles.

Beyond natural predators, development, fishing and poaching have taken a terrible toll on the once thriving Kemp’s ridley species, but Shaver is credited with enabling tens of thousands of endangered Kemp’s ridley turtles to safely hatch and paddle off into the Gulf of Mexico. “These creatures have existed for four million years,” Dr. Shaver explains, “and human activity nearly eliminated them. Our job is to right a wrong by protecting the turtle’s place in the web of life.”

After the Deepwater Horizon oil spill in 2010, the Department of the Interior appointed Shaver to serve as the principal investigator to conduct a study of the impact on nesting and hatching Kemp’s ridley sea turtles.  As the Texas coordinator of the Federal Sea Turtle Stranding and Salvage Network, Shaver has educated many other scientists throughout the state about sea turtle preservation.

The Kemp’s ridley sea turtle is still critically endangered.  Shaver often explains that only 1 in 400 turtles released survive; without Shaver’s monitoring program, survival rates could drop exponentially. But turtle numbers continue growing as evidenced in 2017, when beach patrols found 353 nests in Texas. After decades of work, the number of nests has grown from a dismal 702 in 1985, to nearly 27,000 nests worldwide.

In July 2019, Shaver and her team conducted the 23rd release of the year, releasing 95 baby Kemp’s ridley sea turtles into the ocean during a public event on Padre Island.  Other releases have reached as many of 450 in the past, but all the releases reflect the success of the program and provide the perfect opportunity to educate the public.

More than 14,000 people come from all over the country to witness the sunrise turtle releases.  During turtle releases, Shaver brings the turtles up close and personal to the large crowds that come to witness the releases. As she walks along the long line of attendees, along with other volunteers and team members, each carrying turtles destined for the surf, Shaver enjoys sharing information and important facts about them. “Once they hatch and make their way to the water,” she said, “they swim furiously for 48 hours until they settle into the drift of the coastal waters.” Thousands of turtles released over the years, illustrate the success of her dedicated efforts to save the species and establish a stable nesting ground.

Along with proven success and passionate education came national attention. While Shaver has secured millions of dollars in grant funding to support her work, the National Park Service has increased the turtle conservation program funding. Mina Williams, a retired professor from Del Mar College in Corpus Christi, Texas, describes Shaver as a “pioneer conservationist,” who has “brought national and international attention” to the sea turtle program at Padre Island National Seashore.

Today, Dr. Donna Shaver is the Chief of the Division of Sea Turtle Science and Recovery for the National Park Service at Padre Island National Seashore (PAIS). She oversees a variety of sea turtle research and conservation projects conducted in Texas. She holds biology degrees from Cornell University, Texas A&I University, and her Ph.D. in zoology from Texas A&M University in College Station.

Dr. Shaver has a passion for educating the public and has delivered more than 100 scientific presentations, authored or co-authored more than 90 publications and reports dealing with sea turtles. She has shared her fascination and preservation message through interviews in the New York Times and Washington Post, as well as through programs like the Discovery News. Over the years, Shaver has received numerous recognitions and multiple awards for her work locally, nationally, and internationally, like the U.S. Fish and Wildlife Services Endangered Species Recovery Champion Award, the National Park Service Director’s Award for Natural Resources Research and a Lifetime Achievement Award from the International Sea Turtle Society in 2018.

When Corpus Christi Mayor Joe McComb presented Shaver with a letter of commendation from the city in 2020, Shaver was humbled and quick to share the honor. “It’s recognizing the work that I perform, but also that so many others in our area have helped with,” she said. “Thousands of volunteers throughout the years and many employees, it’s been an effort to try to preserve and protect the magnificent species so that they can be enjoyed by future generations here.”

In 2020, Dr. Shaver was a finalist for a Samuel J. Heyman Service to America Medal, one of the highest honors for a federal public servant. Often referred to as the “Sammies” or “Oscars of Government Service”, Dr. Shaver was the first NPS employee top five finalists since 2008.

From her initial internship and introduction to the Texas coast, Dr. Shaver followed her career path in public service “to dedicate my career to helping recover dwindling sea turtle populations and study these animals. I have spent my working career doing so,” she explains.

“A lot of people said, ‘oh no, you’ll never be able to make a career out of that,’” Dr. Shaver recalls, “It’s been lots of highs and lows, but a blessing in many, many ways that I’m still here working with great people.”