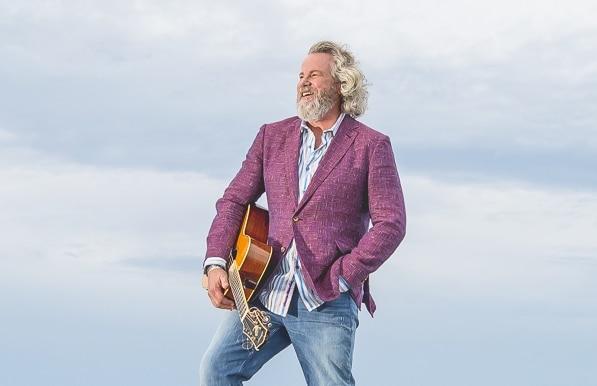 His impressive credentials over a 30-plus-year career include 19 albums, thousands of concert appearances and honors aplenty as a songwriter, performer and philanthropist. The Houston native didn’t start out pursuing a career as a singer-songwriter, but by his sophomore year at Texas A&M University, he secretly knew he wanted the rest of his life to revolve around words and music.

“I was interested in rhyming poetry, and, in fact, I was pretty good at it — better than most,” Keen says. “I taught myself to play the guitar, and, not long after, I began coming up with funky little songs. This opened my eyes as to what you could really do as a songwriter.”

Like a lot of Texas kids, Keen grew up listening to Bob Wills’ Western swing, so he asked his parents for a fiddle. His frustration at “trying to scratch on that darn thing” led him to mastery instead of an Alvarez acoustic guitar and many a joyful jam session at Aggieland as a member of the loose-knit Front Porch Boys, which leaned toward bluegrass.

“All told, I guess there were about 15 Front Porch Boys, most of them from rural Texas towns,” Keen recalls. “We’d have our jam sessions, and we’d perform all over at fairs, spaghetti dinners, rodeos — we took anything we could get because it was so much fun playing and being in front of people.”

After graduating from A&M in 1978, Keen moved to Austin and launched his professional career playing folk and blue- grass at night spots around town and other venues such as Gruene Hall in nearby New Braunfels.

His prowess as a songwriter won him the 1983 New Folk competition at the Kerrville Folk Festival and encouraged him to record his first album, No Kinda Dancer.

Keen began touring outside the state and headed for Nashville in 1986, but in fewer than two years, he returned to Texas and settled in the Hill Country with wife Kathleen after success in the music business eluded him. “I dug a lot of ditches and planted a lot of landscapes,” he remembers, “because I couldn’t get through a door made of paper.” Yet with more appearances and more album releases, his stature and popularity grew as one of the leading voices of a new music genre — Americana.

Keen likes Americana music because it’s a fusion of many styles including country, folk, gospel, rock and bluegrass, and because it relies heavily on acoustic instruments. “All of us who write our own music can belong,” he explains, “because Americana constitutes a bigger umbrella.” Daughter Clara Rose’s podcasts have helped further define and popularize Americana.

While Keen’s career has flourished, he’s managed to allot significant time to worth- while causes.

Youngest daughter Chloe’s desire to play the violin put Keen in contact with Hill Country Youth Orchestras (HCYO), the nation’s only organization that raises money to provide free stringed-instrument music lessons to youngsters up through high school age. In 2007, Keen performed a benefit concert for HCYO, which has become a February tradition in Kerrville. Now and then he invites friends like Ricky Skaggs and Lee Ann Womack to join him.

He also stars in another Kerrville tradition — a yearly, free 4th of July nighttime performance on the banks of the Guadalupe River along with his crack band of musicians, many of whom have been with him for more than 20 years. Together, they make music and entertain audiences more than 120 dates a year.

Keen’s success in music and his devotion to A&M earned him the Distinguished Alumnus Award in 2018.

While he’s not as well known as some other Texas icons, he’s amassed a passionate fan base of rednecks, hippies, frat boys and country scholars who swoon over his real-life lyrics and storytelling ability.

In assessing his achievements, Keen gives the edge to songwriting over performing. He was inducted into the Texas Heritage Songwriters’ Association Hall of Fame along with the legendary Townes Van Zandt in 2012.

“I’m always experimenting,” Keen says, “and I honestly think I can write any kind of song. The payoff to writing is so much greater, because a show is a show, just for that moment. But a song goes on and on.”

That appraisal from a well-traveled Texas troubadour sounds a lot like a familiar lyric to one of Keen’s signature songs that expresses faith in the future: “The road goes on forever, and the party never ends.”