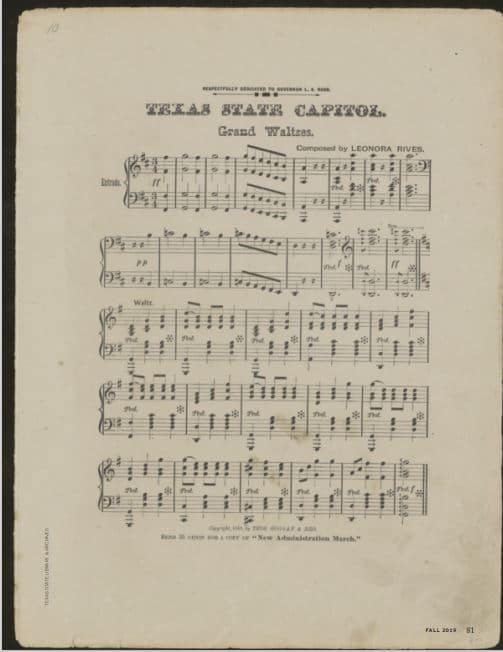 The rich musical history of Texas is reflected in the archival collections held at the Texas State Library and Archives (TSLAC). There’s much to learn about the state’s musical history through paper records, pho- tographs, recordings and even the violin Henry Journeay played during the disastrous Mier Expedition in 1842–43, said to have been crafted from wood scraps left over from a chair he made for General Santa Anna. But not to be overlooked is the Texas sheet music collection, composing 351 pieces of 19th- and 20th-century American sheet music.

Most of the items in this collection are published sheet music, but some music manuscripts, lyric sheets, poems and letters are also present, dating from the founding of the Texas Republic in 1836 through 1962. Songs in the collection are written in English, Spanish, German, French and Italian. Many typically American and Texas genres are represented, and major topics of the music include war, patriotism, politics, romance and religion.

TSLAC also holds original musical manuscripts about both Texan and American patriotism dating from 1836 to 1962, including a song composed by Gov. W. Lee “Pappy” O’Daniel, and two copies of “Texas, Our Texas,” the official state song, signed by the composer, the lyricist, Gov. Pat Neff and State Senator Margie Neal.

The collection also includes sentimen- tal songs written and/or published over more than 100 years, from 1845 to 1949, including many examples from the parlor song genre. These types of songs expressed a wide variety of human emotions and experiences including love, joy, longing and disappointment. But there are also death songs, which are obviously more somber and often include religious or spiritual lyrical imagery.

Religious songs dating 1902 to 1924 document the boom in this type of music spurred on by the intersection of the Third Great Awakening (roughly the second half of the 19th century) and the rise of the American sheet music industry. Some of these songs are overtly Christian, while others reflect more broadly spiritual themes.

Songs from theatrical productions cover the entire first half of the 20th century; reflected there is the rapid rise of musical and non-musical theater, including traveling shows, urban troupes, minstrelsy (including blackface) and more. (Patrons should be aware that some of the songs contain vulgar, racist, sexist and/or otherwise offensive language due to cultural mores of the time period from which this collection originates.)

Many of the compositions are for piano, but sheet music for various instrumental combinations is also present. Keyboard solos were the best-selling of all types of instrumental sheet music in the time period covered by this collection. Mass-produced pianos, including spinets, uprights and grands, became a common fixture in American parlors during this era. Genres present include marches, waltzes, polkas, two-steps and ragtime, mostly composed for trios and quartets. Among these records is the undated and anonymous music for “El Deguello/Toque Particular,” as well as research materials related to the bugle calls used at the siege of the Alamo.

Also present are the notebooks of Carrie Lederer Berger — two volumes that provide an example of the types of pieces a young American woman in the late 19th century might be expected to be able to perform either as a pianist, as a singer or both. This and hundreds of other collections are available for research at the Texas State Library and Archives Commission, open Monday through Friday from 8 a.m. to 4:45 p.m. and the second Saturday of each month in downtown Austin.