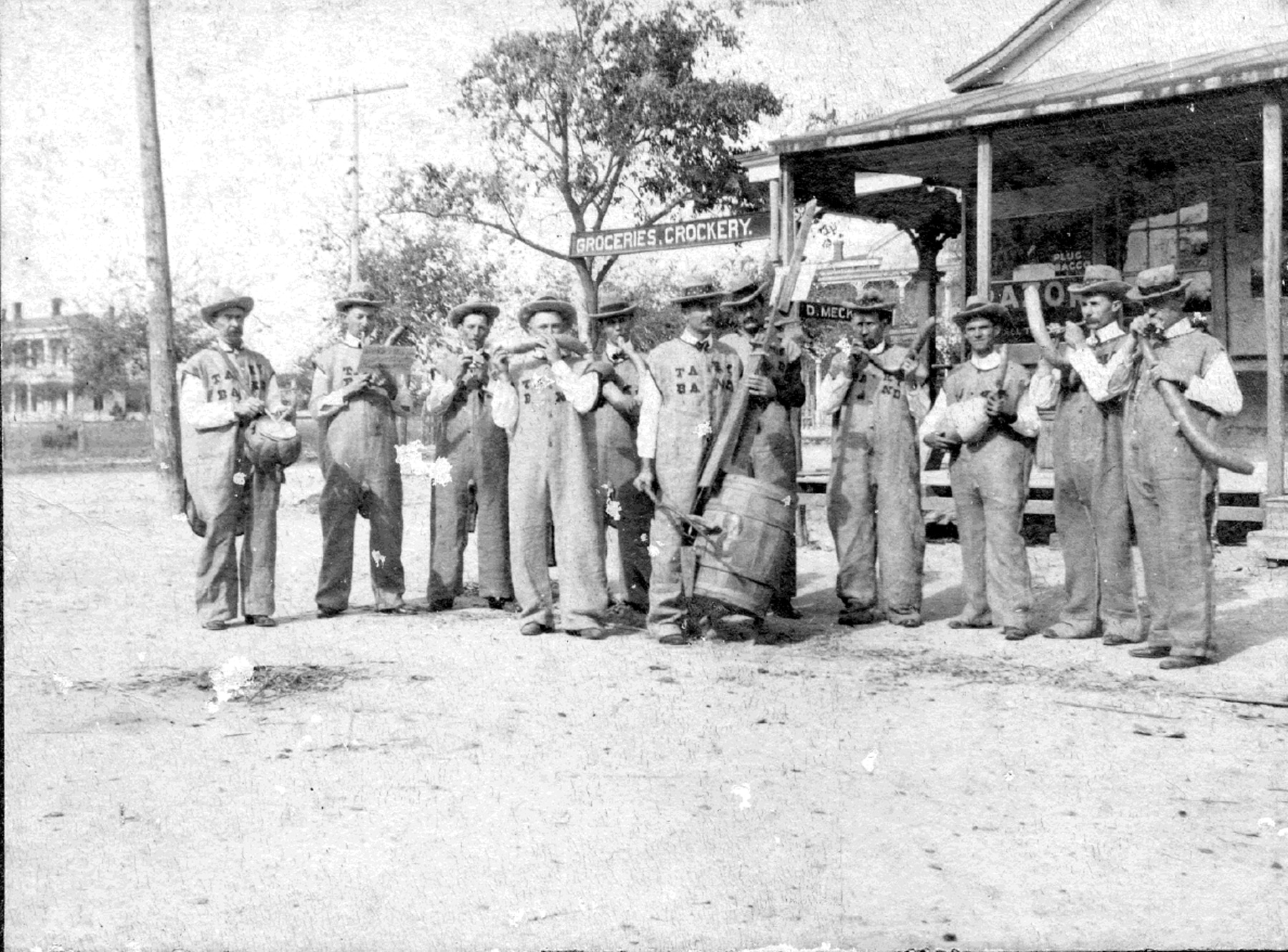 “Colonel Bettie Edmonds,” wrote Robin Stauber in a 2018 newspaper tribute
to the Kendall County historian and artist, “has pained our past.” A retired Air Force nurse and amateur archivist, Edmonds originally published the story of Boerne’s founding for the celebration of its sesquicentennial in 1999.

In the 1840s Germany was plagued with overpopulation. There was barely enough farmland to raise food for the masses because the Industrial Revolution was squeezing out the small farmers. Jobs were scarce, laborers were poorly paid, taxes were high, and there was widespread poverty. Most educated professionals were paid “in kind” with exchanges of food, clothing, and lodging.

The times saw political unrest, revolutions, military conscription, and the oppressive rule of the church. Young students, German writers, and intellectuals who dared to oppose the present system were imprisoned or forced into political exile. Such outspoken people wrote of the people’s rights to search for freedom and encouraged their fellow countrymen to flee.

One such writer who had a large following among the radical young German liberals was Ludwig Börne, a German-Jewish political writer and satirist. He was the first whose writings exclusively criticized the political order of Germany. Although Börne died in 1837, his writings inspired many Germans to make the move to what was then the Republic of Texas.

It was in this time of chaos, in the early 1840s, that the Adelsverein (Society of the Nobility) was founded to provide assistance and protection for the immigration of thousands of Germans to Texas. In 1844, the Adelsverein undertook the first large immigration by sailing ship. For many of the nobility, it meant leaving their titles and luxuries behind to face the unknown. There they would find a “gloriously promised future.” Three hundred twenty acres of land was promised free to families, 160 to single males over seventeen, plus transportation by ship, food, shelter, and transportation to the colony.

It took two months to cross the Atlantic, longer if storms or unusually calm weather prevailed. Most passengers were totally unprepared for the experiences. The ships were overcrowded and sanitary conditions were quite poor. Indianola and Galveston were the major ports in the Gulf, and both were used during the immigration. The first three ships from Germany arrived in 1844 in Indianola with 292 colonists. Between October 1845 and April 1846, 36 ships brought over 5,000 immigrants.

During the largest German immigration of its history, the Republic of Texas joined the United States. In 1846, war broke out between the U.S. and Mexico and every form of transportation was confiscated by the U.S. Army. By this time, the Adelsverein was bankrupt and could not afford transportation, even if there was any. Wealthy immigrants who had deposited large amounts of money with the Adelsverein in Germany—with the understanding that it would be given on demand in Texas—were told that the money was not there. These immigrants endured great hardships because of this deception. Over 4,000 were left on the beach with virtually no shelter. Heat, rain, impure water, and contaminated food, along with exhaustion from the arduous journey, contributed to epidemics. Dysentery, typhoid, typhus, and malaria took the lives of 1,400 people that summer.

Weeks later, land was purchased by Prince Carl-Solms, Adelsverein Commissioner General, about two hundred miles inland. While some immigrants were too sick to move, others against all odds started the long walk, using oxen cart and wagons for their belongings, and leaving prized possessions behind on the beach as they made their way toward their new home, which they called New Braunfels after Braunfels, Germany. During the journey of several weeks, many immigrants continued to perish from disease, exposure, and starvation.

In truth, the Adelsverein was a poorly organized, uninformed, and badly underfinanced organization. Prince Carl-Solms mismanaged the inadequate funds and was $20,000 in debt when he asked to be relieved. He was eventually replaced by Baron Otfried Hans von Meusebach, a respected, practical, and organized man. Realizing the need to fan out to relieve congestion and the spread of disease, Meusebach chose a new site about 80 miles away and named it Fredericksburg, after Prince Frederick of Prussia.

The pioneers liked what they saw: rugged, verdant hills, crystal clear rivers, and streams and small valleys. When the immigrants began to settle in the colonies, they gathered together where they could enjoy their common interests in music, literature, philosophy, and politics. At least five of these so-called “Latin Settlements’ were established, the largest being in Sisterdale. It was said that practically every house had a library and the men gathered every evening for songs and political discussions in Latin. Disillusioned with almost everything, these German immigrants decided that “the quest for learning was the only occupation in the world.”

Think of these broadly contrasting sights to visitors of these “Free Thinkers”…coffee in a tin cup on a Dresden saucer…a Beethoven concert on a grand piano in a log cabin…a bookcase half filled with classics and the other half with sweet potatoes. Unfortunately, such Latin Settlements were not successful because these intellectuals knew nothing about farming or manual skills.

Later immigrants included more working-class farmers, bakers, butchers, and craftsmen who knew how to work and get things done. Other groups started fanning out to settle more sites beyond the Hill Country German belt stretching to the east in Kerrville, Mason, and Hondo, and by the 1880s German ethnic-islands dotted north central, northern, and western Texas. As time went on the immigrants also became more diverse, including groups of Wends, Mennonites, and Alsatians.

One Latin Settlement along the Llano River was named Bettina after a female radical thinker. After this colony failed in 1849, five intellectuals organized a group on a communistic farm named Tusculum. Like Bettina, it broke up after a year, but some of the men stayed on as early settlers, and in 1849 Gustav Theissen and John James platted the land and named the town Boerne, after Ludwig Börne (doing away with the inflected vowel and employing American spelling).

The town of Boerne quickly developed as businesses became organized. Stagecoach routes began to go west and in 1856, the first post office and stage stop was opened. Many of Boerne’s first businesses were established by William Dietert and included a sawmill, gristmill, blacksmith shop, livery stable, butcher shop, general store, and saloon. The first homes were log cabins with thatched roofs, but since limestone was so abundant, the pioneers learned that it could be easily quarried nearby for building homes and businesses. Skilled rock masons built structures which remain today as historic sites.

Another developing town nearby was Comfort. In 1852, Ernst Altgelt established a gristmill there as a first business, just as Dietert had in Boerne. The town was settled by Altgelt and a group of “free thinkers” who quite openly left Germany to escape religious persecution. Between 1852 to 1892, no churches were built in Comfort, and no prayers were allowed. Neither were churches allowed within the town of Boerne. Folklore tells of a sign supposedly posted along Cibolo Creek indicating that preachers caught in town after sundown would be shot.

By the time of the Civil War, German settlers signed an oath of loyalty to the United States though they were now living in a Southern Confederate state. Their decisions of whether to support the North or the South in the battle created rifts that divide German families even today. Many Germans came to Texas to avoid war and now were forced to make a choice. They were also anti-slavery, thus anti-Confederate. The story of the Treue der Union Monument in Comfort, the only monument dedicated to Union soldiers below the Mason-Dixon Line, brings home the intense German feelings during the Civil War.

Following the war, families concentrated their efforts toward the peaceful existence they had originally sought. It was a struggle to survive because economic conditions were poor. Another problem plaguing the settlers was the Indians, who were quite active in the area until about 1872. Some of the first burials in the Boerne Cemetery were the Bickel family, who were massacred by Indians in 1865.

In the early days, trips to San Antonio for supplies took a full day oneway by horse and buggy or oxen wagon from Boerne, and when the stagecoach came it was still a grueling seven-hour trip. In 1887, the San Antonio & Aransas Pass Railroad (SA & AP) brought the first train from San Antonio. In the 1960s the advent of Interstate 10 provided easy accessibility to the German towns across the Texas Hill Country.

During the 1990s and 2000s the population of these Hill Country communities had grown exponentially, as others coveted the rugged beauty of the land just as the early settlers did. The fields are disappearing as new developments emerge from old German homesteads of the early immigration. At the very core of the Texas Hill Country’s distinctive character and culture is its unique history of the struggles and the courage of the immigrant families to make it their new home.