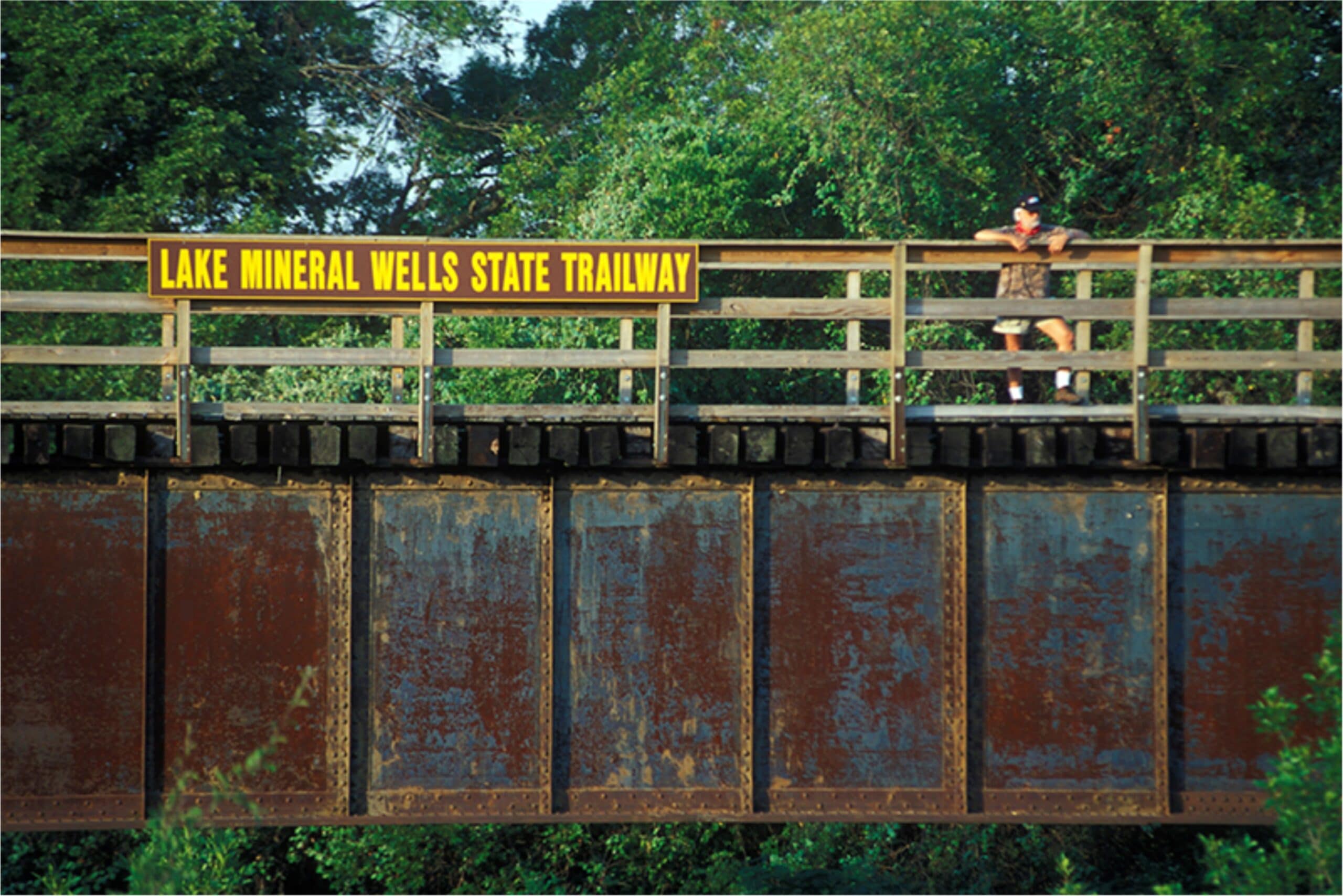 The gentle cadence of steel wheels, the smell of creosote and the faint clanging of bells accompanied by a distant whistle have been part of the American fabric for years. The first commercially viable railroad to operate in Texas, the Buffalo Bayou, Brazos and Colorado was chartered in 1850 with the first public segment of track coming in 1856. By the beginning of the 20th century, the railroads’ golden age, there were more than 250,000 miles of track stretching across the continental United States, more than 15,000 of track in Texas.

As alternative methods of travel emerged, the railroad industry began to decline, and today approximately 233,000 miles of track remain in the United States, many of them abandoned.

To protect these rail corridors, Congress amended the National Trails System Act in 1983 to preserve them for potential reactivation to rail service and allow them to be developed into trails for hiking and biking.

Today the grassroots Rails-to-Trails Conservancy boasts a trail network of more than 22,000 miles, 300 of them in Texas, with more on the horizon. For communities throughout the state, both rural and urban, these reclamation projects help restore economic prosperity to neighborhoods and underserved populations and preserve our railway heritage while promoting personal and environmental health to Texans far and wide.

The 64-mile Caprock Canyons Trailway stretches from the west, at South Plains on top of the Caprock Escarpment, to the east at Estelline in the Red River Valley. It spans three counties (Floyd, Briscoe and Hall), crosses 46 bridges and passes through Clarity Tunnel, one of the last active railroad tunnels in Texas. The trail is open to hikers, cyclists and horseback riders, perfect for exploring, day tripping or longer excursions.

What began in 1865 as a southern branch of the Union Pacific Railway, the Missouri-Kansas-Texas (MK&T) became known as the “Katy” and was the first railroad to enter Texas from the north. The network of rails eventually grew to serve communities from Junction City, Kan., to Galveston.

The abandoned right-of-way vacated in the 1980s was donated to the city of Dallas in 1993. The greenbelt along the route was restored with county and state grants as well as public/private partnerships overseen by the aptly named Friends of the Katy Trail, a nonprofit founded in 1997.

Once the major eastbound rail route through the most densely developed area of Dallas, the 3.5-mile-long section of the line now provides recreation to the more than 300,000 nearby residents and adjacent neighborhoods.

The Weatherford, Mineral Wells & Northwestern Railway first carried passengers to the healing mineral wells in 1899. The railroad changed hands several times until 1989, when the city of Mineral Wells purchased the line. Various segments of the line continued operation until insufficient traffic forced its closure in 1992, but that wasn’t the end of the story. On June 6, 1998, Lake Mineral Wells State Trailway opened on National Trails Day, which was also the 75th celebration of Texas State Parks.

The 20-mile trailway has welcomed thousands of hikers, cyclists and equestrians since 1998. The grades are flat, with gentle curves making it a great trail for all ability levels. The trailway has four trailheads, paved parking, drinking water, restrooms and wayfinding information.

Trail enthusiasts can start their trip in downtown Mineral Wells and make their way to the scenic Mineral Wells State Park and on to Cartwright Park near Weatherford. An interactive map is available at visitmineralwells.org

This scenic 130-mile trailway stretches across seven counties and 19 rural towns and is the longest railbanked project in Texas.

In the 1990s the Union Pacific and Chaparral companies railbanked the tracks between Farmersville to the west and New Boston to the east.

The terrain of the trail varies and can be especially challenging on the remote parts of the path. Farmersville is the western trailhead, nestled in the historic downtown, and an ideal place to begin your journey.

Further east the tranquil Trail de Paris, located in the city of Paris, is a can’tmiss along the NETT. This segment of the trail rests beneath a canopy of trees, with directional and educational signage along the way and unique places to visit throughout the city should you hop off the trail.

New Boston is the eastern trailhead and begins in the Texas and Pacific Railway (T&P) Trail Head Park. This is a great place to kick off your trip to the west. The park sits on the old T&P property, where the trains came through back in the 1870s. While you’re there, take time to visit the Three Bostons Museum.