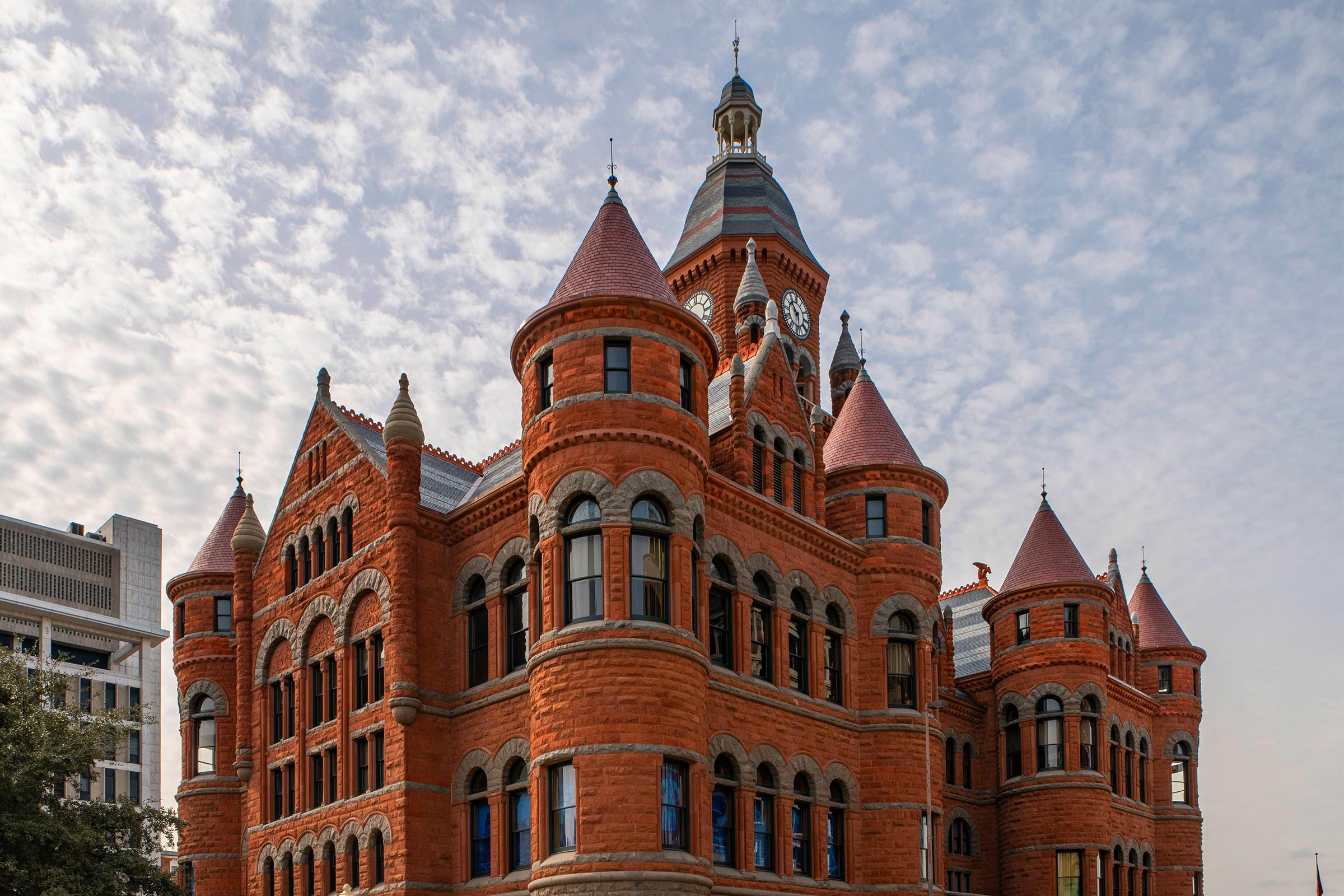 Known as the “Broadway of America,” the Bankhead Highway was one of the nation’s earliest transcontinental roadways, stretching from Washington, D.C. to San Diego, California.

In Texas alone, it ran 850 miles from Texarkana to El Paso. Today, heritage travelers can follow in the tracks of auto pioneers with a 105-mile jaunt that takes in historic courthouses along the eastern/northern Texas portion of the Bankhead, which roughly paralleled I-30 and US 67—from the bustling Dallas–Fort Worth area to a quaint Main Street community in northeast Texas.

Begin your journey in the heart of the Metroplex at the old Dallas County Courthouse, which now houses the Old Red Museum of Dallas County History and Culture. Built in 1892, the magnificent Romanesque Revival structure was designed by architect M. A. Orlopp and features a blue granite exterior on the lower level and contrasting red sandstone for the upper floors. Other prominent elements include eight circular turrets and a central clock tower, which was reconstructed during a full restoration as part of the Texas Historical Commission’s (THC) Texas Historic Courthouse Preservation Program (THCPP).

One notable artifact inside the impressive local history museum recalls the golden era of highway travel. The neon-red Pegasus sign was a symbol of the Mobil Oil Company. Originally built for the 1939 World’s Fair in New York City, the eleven-foot sign then adorned a Mobil gas station in east Dallas for nearly 50 years.

Across the street from Old Red is Dealey Plaza, site of President John F. Kennedy’s assassination. Heading east on Commerce Street along the route of the old Bankhead Highway, you’ll pass through Deep Ellum, the entertainment and arts district that was originally founded as a freedmen’s community. Further east on the historic route is Fair Park, the stunning collection of Art Deco structures built for the 1936 Texas Centennial that is now home to the Texas State Fair.

Heading east from Dallas, the main alignment of the old Bankhead Highway generally followed what is now Interstate 30. About 80 miles to the east is the town of Sulphur Springs, seat of Hopkins County. The town centerpiece is another Romanesque Revival masterwork that was a participant in the THCPP. Designed by renowned architect J. Riely Gordon, the 1895 courthouse was fully restored in a project that was completed in 2002. Numerous restaurants, cafés, and shops surround the courthouse square.

Another 25 miles to the east is Mount Vernon, a THC-designated Texas Main Street city with a town square that recently experienced an inspiring revitalization. Unlike a traditional courthouse square with the judicial building at center, it features an open public park in the middle with the Franklin County Courthouse on the north side. The architect for the 1912 building was L. L. Thurmon, who designed several courthouses in Texas, all in the Classical Revival style with clock towers. This one was rededicated in 2014 after a five-year restoration partially funded by the THCPP.

In 2018, the Mount Vernon square and surrounding blocks were listed as a historic district in the National Register of Historic Places. Several buildings on the square have been restored in recent years and are now occupied by thriving businesses such as Steve-O’s Pizza and Pub and the M. L. Edwards & Co., General Store, which contains a bistro, coffeeshop, and home goods store.

The THC has published several Bankhead Highway resources in the last several years, including a brochure, webpages, and a mobile tour that features photos, videos, audio files, maps, and other travel information. Explore the destinations in this article and many more at texastimetravel.com/bankhead.