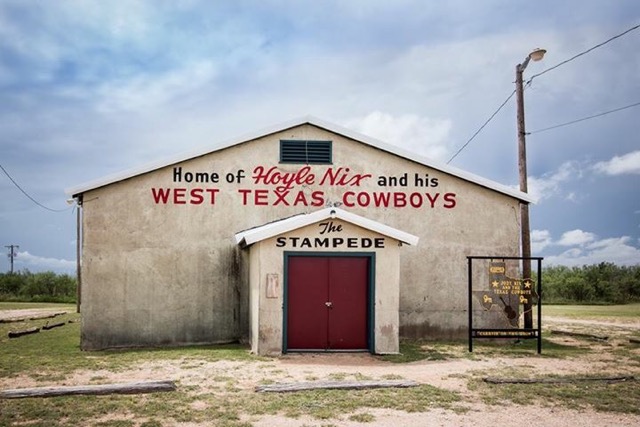 Hunting Holly in the Hub City

West Texas dancehalls don’t come any more than a notable bare-bones affair situated a mile and a half northeast of Big Spring. Surrounded by oilfield trucks and pump jacks, the Stampede Dance Hall was opened in 1954 by Hoyle Nix and his brother, Ben, as a place to play music and for the locals to dance. The halls is 120 feet long and 40 feet wide — a plain building with a dance floor made to last. If you’re lucky, you’ll catch Hoyle’s son, Jody — considered by many the number one Western swing fiddler still working — with his band, the Texas Cowboys, offering up their two-stepping version of Western swing.

Brothers Hoyle and Ben formed the West Texas Cowboys in 1946 and patterned the band after Bob Wills’ Texas Playboys. Nix had already established a dance circuit in the area and was making regular appearances in other towns, including Abilene, Lubbock, Midland, Odessa and San Angelo.

The West Texas Cowboys cut their first recordings in 1949 for the Dallas-based Star Talent label. The initial Star Talent release, Nix’s “Big Ball’s in Cowtown,” a folk-derived re-write, proved to be an enduring standard. In fact, Jody says that in spite of its old-timey feel and the song’s actual age, it’s still very popular.

“We never play a dance — and I mean never — that we don’t get a request for ‘Big Ball’s in Cowtown,’” Nix says. “We’ve got a fan in Guthrie who’s followed us forever, it seems, and he’ll always dance by the bandstand and ask when we’re going to play it. It ranks right up there with any of the Western swing standards in terms of number of requests.” Nix says he’d “have to do some digging” to figure out how many times the tune’s been recorded, but he suspects more than a hundred. As for how many times he’s played the song, Nix chuckles. “Well, counting the 45 years I was with daddy playing drums before he passed, I’ve probably played it at least 100 times per year, so just do the math.” He pauses, then adds, “A bunch.”

During the late 1950s, the West Texas Cowboys grew to their largest size with nine members. Hoyle Nix had first shared a stage with Bob Wills in 1952 in Colorado City, Texas, and their two bands soon began touring together, splitting the playing time at each dance. After Wills disbanded the Texas Playboys in the early 1960s, he continued to appear with Nix on a fairly regular basis until his first stroke in 1969. The respect Wills had for Nix was evident when he invited Nix and Jody to participate in what turned out to be Wills’ final recording session, to cut For the Last Time, in 1973.

Hoyle Nix’s last recordings were made in 1977, and he died after a short illness in 1985. He was inducted into the Texas Western Swing Hall of Fame in 1991. (Jody Nix and the Texas Cowboys were inducted in 2009.)

Jody started playing drums at age 8 in his dad’s band. By the time he was 11, he was playing fiddle, and at 16 he began singing. He’s has been in the business for six decades, performing at dances and shows all over Texas and parts of the Southwest. He’s played with local symphonies, and even played the Black Tie and Boots Ball in 1989 as part of George H. W. Bush’s inauguration festivities. In addition to Wills, he’s worked with Ray Price, George Strait and Asleep at the Wheel, among others. He has a show on XM Radio — on the “Willie’s Roadhouse” channel — and has a local show, “Jody Nix’s Sunday Night Country,” on KBYG 1400 AM and 103.6 FM every Sunday night from 6p.m.to8p.m.

As for the king of Western swing, Nix notes that Bob Wills had a special fondness for “Big Ball’s in Cowtown.” He recorded it several times and would often play it with Hoyle Nix. The two had something of a friendly rivalry over who had the funnier asides, like, “Help me, mama, the hogs has got me.”

“They were both pretty funny guys,” Nix says, “and they were always looking to entertain each other or to make a joke or say something witty. They had a great, long friendship and loved to cut up.”