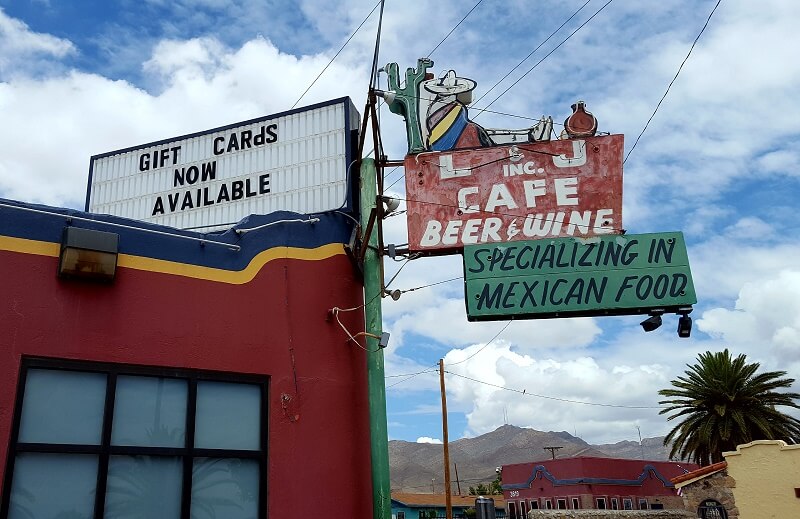 Let’s get the obvious out of the way: when you’re voted El Paso’s best Mexican restaurant and the best Tex-Mex in Texas, you’re doing something right. And while the food at L & J Cafe speaks for itself, “The Old Place by the Graveyard” is worth a stop for its history as much as the Chile con queso and shredded beef tacos.

As the L & J Cafe fast approaches its centennial celebration — the restaurant was originally founded in 1927 as Tony’s Cafe — it remains a steadfast point of pride for a city whose Spanish and Mexican heritage predates much of the United States. There is perhaps no better (or at least certainly no tastier) modern symbol of lineage than a family-owned business that’s as welcoming to daily regulars as international celebrities.

Antonio and Juanita Flores opened Tony’s Cafe on the outskirts of town, thanks in part to the not-so-secret homebrew and slot machines that defied the waning regulations of Prohibition. Throughout the next 40 years of operation, El Paso grew up around the cafe, which became an increasingly important local haunt.

In 1968, John and Lilian Duran took over for their parents, changing the name to L & J Cafe and operating it for 20 more years before Leo and Francis Duran became the third generation to take over. Leo was recently inducted into the Texas Restaurant Association’s Hall of Honor, just the fifth El Pasoan in the organization’s storied history. Now general manager Vanessa Duran represents the fourth generation to carry on the family’s legacy.

The restaurant’s kitchen has tripled in size since the original days, and the staff now exceeds 100 people. There’s also a gift shop, which began almost exclusively to sell the restaurant’s famous Tombstone Salsa.

But besides the growth and singular name change, L & J Cafe has remained fastened securely to its Mexican American roots — an identity no doubt fortified by its proximity to the Mexican border and a culinary culture renowned for authenticity. The restaurant won USA Today’s Best Tex-Mex contest in 2018.

“A lot of the recipes were actually handed down through my great-grandparents and through one of our cooks, Polita,” Vanessa Duran says. “Polita passed away several years back, but I do fondly remember being here while she was in our kitchen. A lot of our recipes are her doing, and my mom [Lilian] is the other head honcho when it comes to the food. That’s her baby.”

It’s part of the reason countless celebrities make an effort to go to the restaurant whenever they’re passing through town, from Miranda Lambert and Faith Hill to Ethan Hawke and Tony Hawk to Arnold Schwarzenegger and Sam Elliott — and the entirety of Earth, Wind & Fire.

The restaurant also shows a commitment to those in need. When more than 2,000 refugees sought shelter at temporary shelters in El Paso and Las Cruces in late 2018, Leo Duran and other local restaurateurs rallied the food community. Soon, L & J Cafe and several others were feeding thousands of Central American asylum-seekers fleeing violence in their home countries.

“I bear witness to the great desperation of these families,” Leo Duran told the El Paso Times. “They are very humble, in-need individuals. And I, for one — our business for one — cannot and will not let them go hungry or anyone else who seeks help.”