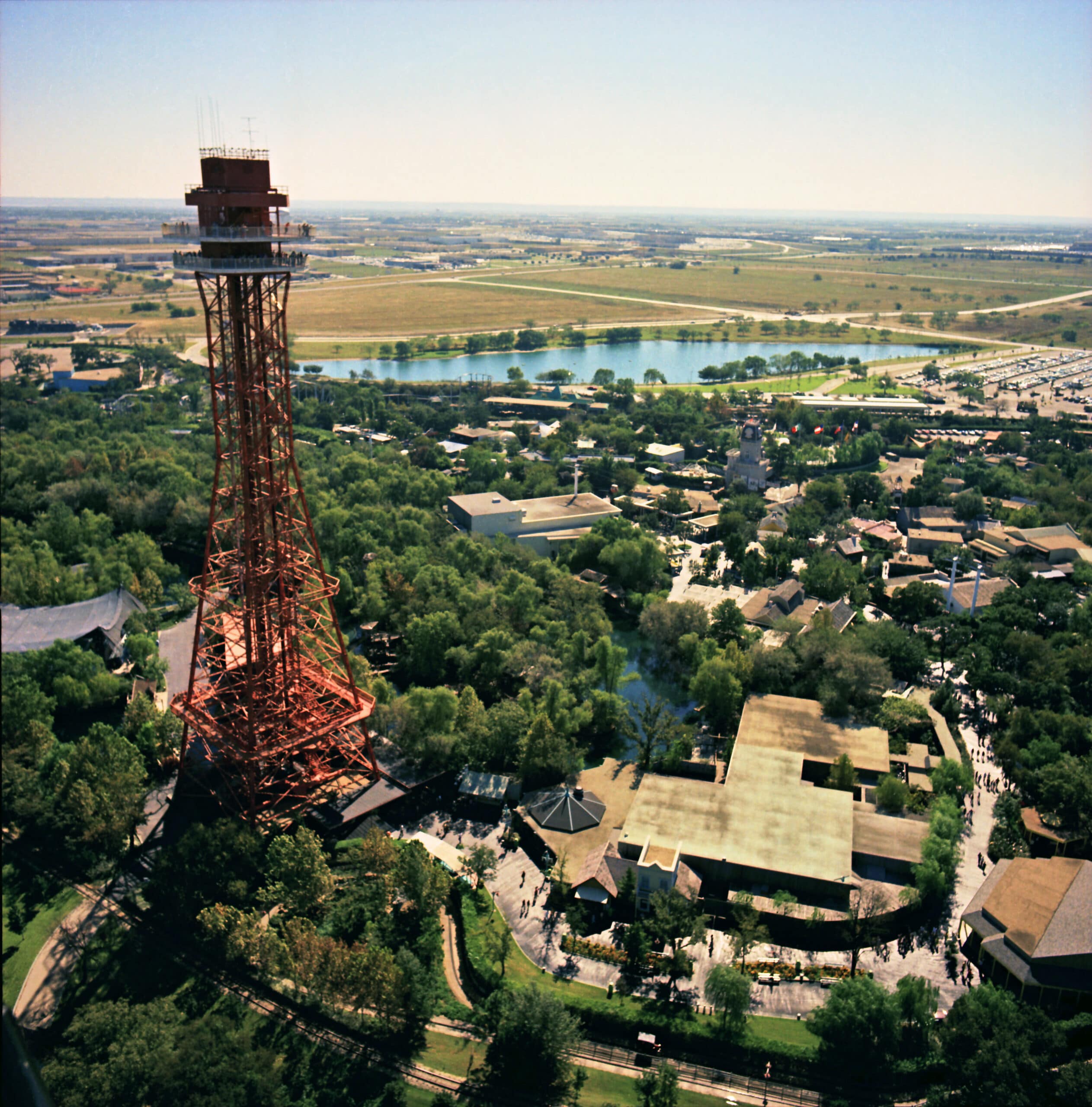 On Sunday, July 17, 1955, families across America sat down in their living rooms and tuned into ABC to watch a live television broadcast that would mark the dawn of a new era in American culture and shape tourism for generations to come. The broadcast was an elaborate showcase of the opening of Disneyland theme park, in Anaheim, Calif.

The broadcast opened with host Art Linkletter asking his children what things in the park they most looked forward to experiencing. His 8-year-old daughter, Sharon, enthusiastically responded, “Frontierland — where Davy Crockett fights the Indians!” Texans watching the broadcast likely took note that some of their own state’s history was on display in this new amusement land in California. Walt Disney’s television show-turned-movie, Davy Crockett: King of the Wild Frontier, starring Fess Parker, had opened in May of that year and was still showing in theaters across America.

When describing the park’s Frontierland, Walt Disney said, “All of us have cause to be proud of our country’s history, shaped by the pioneering spirit of our forefathers. Our adventures are designed to give you the feeling of having lived, even for a short while, during our country’s pioneer days.”

The late 1950s saw a boom in Americans traveling for leisure. The Federal Aid Highway Act of 1956 not only sparked construction of the interstate highway system, it also sparked the imagination of the traveling public.

A turning point for Texas tourism came in 1959 with the repeal of an antiquated Texas “carpetbagger” law prohibiting the expenditure of state funds for tourist and industrial advertising. This change signaled to many in the business community that Texas was ready to become a major player in American tourism. The only question was how the state would capitalize on this new opportunity.

In San Antonio that year the Tourist Attraction Committee was created under the San Antonio Chamber of Commerce to look at economic development of the River Walk. In 1961 the group hired Marco Engineering, a California engineering company (more on that to come), to create a report on the commercial potential of the river. In 1962 the first major developments along the River Walk were completed, but it wasn’t until 1968 that San Antonio truly capitalized on the developments with the hosting of HemisFair.

In Dallas in 1959 the Dallas Theater Center opened one of the first major regional theaters in the U. S. featuring the Kalita Humphreys Theater, designed by Frank Lloyd Wright. Dallas hoped to become a top arts and culture destination with this and other new attractions. Also during that year Dallas was working to bring a new professional sports team to town, and in 1960 the National Football League approved a franchise for the Dallas Cowboys to owners Clint Murchison Jr. and Bedford Wynne (more about his brother to come).

As the Bankhead Highway had developed through Texas in the early 1920s, the route went directly through the heart of the towns and cities, but with the establishment of the Eisenhower Interstate Highway System in 1956, the routes intentionally avoided the congested city centers to allow for the potential movement of troops to and from military bases, airports, seaports and major rail terminals. The new interstate highways were viewed as an opportunity and challenge for the rapidly growing cities of Dallas and Fort Worth but posed major problems for towns in between such as Arlington and Grand Prairie that would be almost completely bypassed. That led to the development of the Dallas–Fort Worth Turnpike, a toll road linking downtown Dallas to downtown Fort Worth, opening to traffic on Aug. 27, 1957. This opened up new opportunities for Grand Prairie and Arlington.

Arlington Mayor Tom Vandergriff (mayor from 1951-1977) had attended the University of Southern California, graduating in 1947, and had witnessed the rapid growth of the Los Angeles metro area and particularly developments in nearby Anaheim. When he returned back home to work at his father’s Chevrolet dealership — and later as president of the Arlington Chamber of Commerce — he often referred to how Arlington could have the same level of success as Anaheim.

As mayor, Vandergriff went to California in 1958 and met with Walt Disney to persuade him to build another Disneyland park in Arlington. Before going, he convinced Dallas real estate developer Angus G. Wynne Jr. to donate land in Arlington for a new Disney park. Wynne was the CEO of Great Southwest Corp and Great Southwest Industrial District in Arlington and the brother of Bedford Wynne. Vandergriff showed Disney the demographic and geographic similarities between the two cities, making the case that Texas would be supportive of a themed amusement park.

Disney ultimately rejected the offer. With all of his resources closely connected to the Disney Studios in Burbank, Calif., Walt Disney wasn’t yet ready to develop another park, particularly at such a great distance. But Disneyland’s market surveys showed that only 5 percent of their visitors came from east of the Mississippi River, where the majority of Americans lived. When Disney eventually started looking east, he imagined something much grander in scale, eventually acquiring over 30,000 acres in central Florida. His plans for another “land” had grown to an entire new “world,” but he wouldn’t live to see it become a reality, dying from lung cancer in 1966.

“Mayor Tom Vandergriff talked Angus G. Wynne Jr. into building a theme park in Arlington,” says Jim Brothers, the current marketing director for Six Flags Over Texas and Hurricane Harbor. “He’d already convinced General Motors to build a manufacturing plant and was eager to develop the town of 6,000 people into a much larger city.” Wynne was urged by Vandergriff to go visit Disneyland, and he made the trip to Anaheim in 1959 and was inspired to build an equally impressive themed amusement park for Texas. They started making plans that same year to build what would become Six Flags Over Texas. Disneyland was 160 acres, and Wynne selected 212 acres of prime property along the new Dallas–Fort Worth Turnpike for the park.

Wynne hired two key people to lead the development of his new Texas-themed amusement park. The first was C. V. Wood Jr., who’d served as vice president and general manager of Disneyland. Wood had grown up in Amarillo and attended Hardin-Simmons University in Abilene on a scholarship as trick roper in the HSU Cowboy Band, and studied under famed Texas history professor Dr. Rupert Richardson before moving on to graduate from the University of Oklahoma. According to Wood’s 1992 New York Times obituary, “He was Disneyland’s first employee and supervised its site selection in California, the land purchase, the construction, the opening in 1955 and its operation for the first year.” Wood’s company, Marco Engineering, became a leading consulting firm for the leisure industry that would go on to shape many tourism ventures across the country, including the San Antonio River Walk.

Next Wynne hired architect and Hollywood set designer Randall Duel to design the park. Duel started his career working on films such as The Wizard of Oz (1939) and had become a leading set designer by the 1950s, serving as art director for top films including Singin’ in the Rain (1952). He’s credited with choosing to divide the park into six uniquely themed areas: those original areas were Spain, France, Mexico, Texas, Confederacy and Modern USA.

“The original name of the park was going to be Texas Under Six Flags,” Brothers says, “but Mrs. Wynne pointed out that Texas has never been under anything, so the name was adjusted to Six Flags Over Texas.” Construction on the park began in August 1960, and the official grand opening was held on Aug. 5, 1961. Admission to the park was $2.75 for adults and $2.25 for children; parking was 50 cents, hamburgers were 35 cents and soft drinks were 10 cents.

Each of the six areas of the park had its own signature themed attractions. A popular feature in the Confederacy area was the Confederate Army Recruitment Station, where a crew of soldiers would perform precision marching and rifle handling drills accompanied by traditional Southern music. At the end of each performance the soldiers would call to the crowd and ask the kids to “come enlist with Terry’s Texas Rangers” and would be handed a wooden rifle, put into formation and taught to march. Just try to imagine that happening today. In the Spain section, visitors could hop on a live mule and follow conquistador explorer Francisco Vázquez de Coronado, riding in a “mule train” through the park’s version of Palo Duro Canyon.

The timing was great for a historythemed tourist attraction with the recent, popular John Wayne movies, Rio Bravo (April 1959),The Horse Soldiers (July 1959) and The Alamo (October 1960). “We did half a million visitors the first year,” Brothers explains. “In the early years, we tracked city of origin by writing down the license plate numbers of the cars, since the number had a designation of what county they came from.” Early on, visitors were coming mostly from Texas, but as word spread, visitors started coming from around the country and even from foreign countries.

Over time, the primary appeal of the park went beyond the park’s historic features.

“When the park first opened, our big attraction was the Flying Jenny — a carriage style ride that was operated/pulled by a mule,” Brothers says. “In the later years, our Log Flume ride and Runaway Mine Train became guest favorites and are still quite popular today.”

Although Texans didn’t convince Walt Disney to build one of his parks here, many Texans believe the Lone Star State is better off without the mouse.