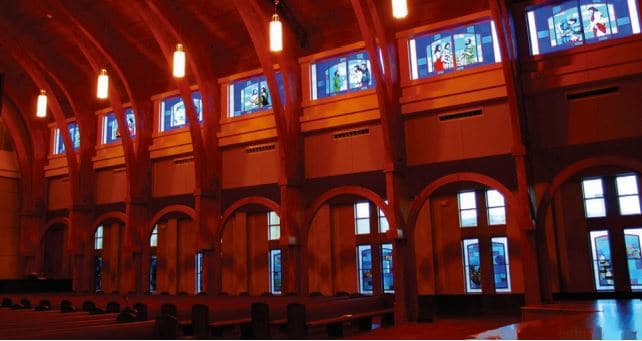 The stretch of Blanco Road in San Antonio that hosts the Cavallini Company Stained Glass Studio is a pretty standard urban landscape, with convenience stores, auto shops and fast food restaurants dotting the streets. The broad, low-slung Cavallini warehouse blends right in — until, that is, you walk through the front door of the company’s retail store and see the small stained glass window hangings inside. It’s a drizzly day, without much distinction between the grey asphalt and overcast sky, so the little chunks of color seem especially bright.

Adrian Cavallini greets me and promptly invites me back to a studio filled with tables covered in meticulously drawn plans and, of course, windows in varying stages of assembly. Many are destined for private homes in San Antonio and elsewhere in the Hill Country. “Commissions make up about 35 to 40 percent of our business,” Cavallini estimates. In addition to its work for individual homeowners, the company designs and installs mosaics and stained glass windows in churches and private chapels across Texas and the Southwest. The art glass market is small but complex, and the Cavallini Company has developed a solid and respected presence during its several decades of operation.

Adrian’s father, Manlio Cavallini, founded the business in 1953 after emigrating from Italy. At first, the company focused on art glass mosaics, adorning spaces from swimming pools to San Antonio’s Tower of the Americas. Adrian has worked with his father since high school, eventually joining the company full time and now serving as its president. “My dad’s specialty was mosaics,” he notes, “but he gave me the freedom to figure out what to do with stained glass.”

The Cavallinis broadened their scope to include stained, faceted and etched glass work, with restoration services picking up in the early 1980s. Adrian’s wife, Debbie, and their three sons all work for the company, along with a team of designers and fabricators. The Cavallinis have worked on original windows and restoration projects in churches and chapels from El Paso to Beaumont, even stretching into New Mexico, Oklahoma, Arkansas and Louisiana.

The process of creating a stained glass window, whether for a private home or a large church, requires careful planning, extensive communication and the skills of a dedicated and experienced team. Stained glass as a craft has been practiced for hundreds of years, and the massive windows in the cathedrals of Chartres, in France, or Augsburg, in Germany, are still as dazzling against the stone as they were in the thirteenth century.

Obviously, the technology has changed throughout the generations, but the fundamentals of design and construction remain the same. When a client approaches the Cavallinis with a project, the practical details are established first: dimensions, structural materials and the like. Then the conversation can move to questions of design, imagery, color — all elements necessary to “create the mood” the client desires.

Many large, illustrative church windows, both in the Cavallini Company’s repertoire and elsewhere, are made with leaded glass. When glass is treated with lead oxide, it becomes both brighter and more receptive to colored stains. The leaded glass windows in the Cavallini portfolio show scenes of remarkable detail and depth, from depictions of the Seven Sacraments to portraits of saints and other holy figures. These features of a leaded glass window are hand-painted before being fired in a kiln at 1100 degrees Fahrenheit to fuse the paint to the glass.

The electric kiln seems like a significant modern perk to the creative process. When I mention this to Cavallini, he agrees. “The tools and the technology have improved,” he says. “We use metal alloys with more antimony to build windows that are more structurally sound, and we plot layouts on the computer.” He’s quick to emphasize, however, that for his company the computer is just that: a tool. “We still do the design by hand,” he explains, “and that’s what we’ve been doing all along. I think the end product is better.”

Roch Babin agrees. He’s worked as a designer with the Cavallini Company for 36 years. He pulls out some designs he’s currently refining for a church in Beaumont, hand-drawn with colored pencils. Pencils are better for mosaic designs, he explains; he uses watercolors for stained glass. After viewing the numerous books on cathedral glass, rose windows and iconography in his studio, I wonder if there’s any tension between incorporating images that belong to such an established and recognizable artistic tradition and creating original works in the twenty-first century. “Well, I call myself a designer,” Roch says. “I’ll do my research and draw from that stimulus, but it’s an architectural art form.”

Touring the studio, with its concrete floors and wood cabinets containing tools and raw glass sheets, is visual evidence that art is as much about the gritty detail as it is about creative genius. A lot of planning, teamwork and physical labor is required to achieve the “splashing of purple and miracles,” as French writer Paul Claudel once rhapsodized. Cavallini has modified the old carpentry adage of “measure twice, cut once,” doubling the first figure. After over half a century in business, you have to figure he knows what he’s talking about.

When Cavallini walks me back to the parking lot, he points out a mosaic on the front of the building. Panels of a swirling, abstract design in reds, greens and blues decorate several feet along the wall. Adrian’s father, Manlio, now 89, designed and installed that mosaic last year. It’s an encouraging testament to the continuation of an ancient craft, coexisting with contemporary technology and still holding the power to evoke contemplation and awe.