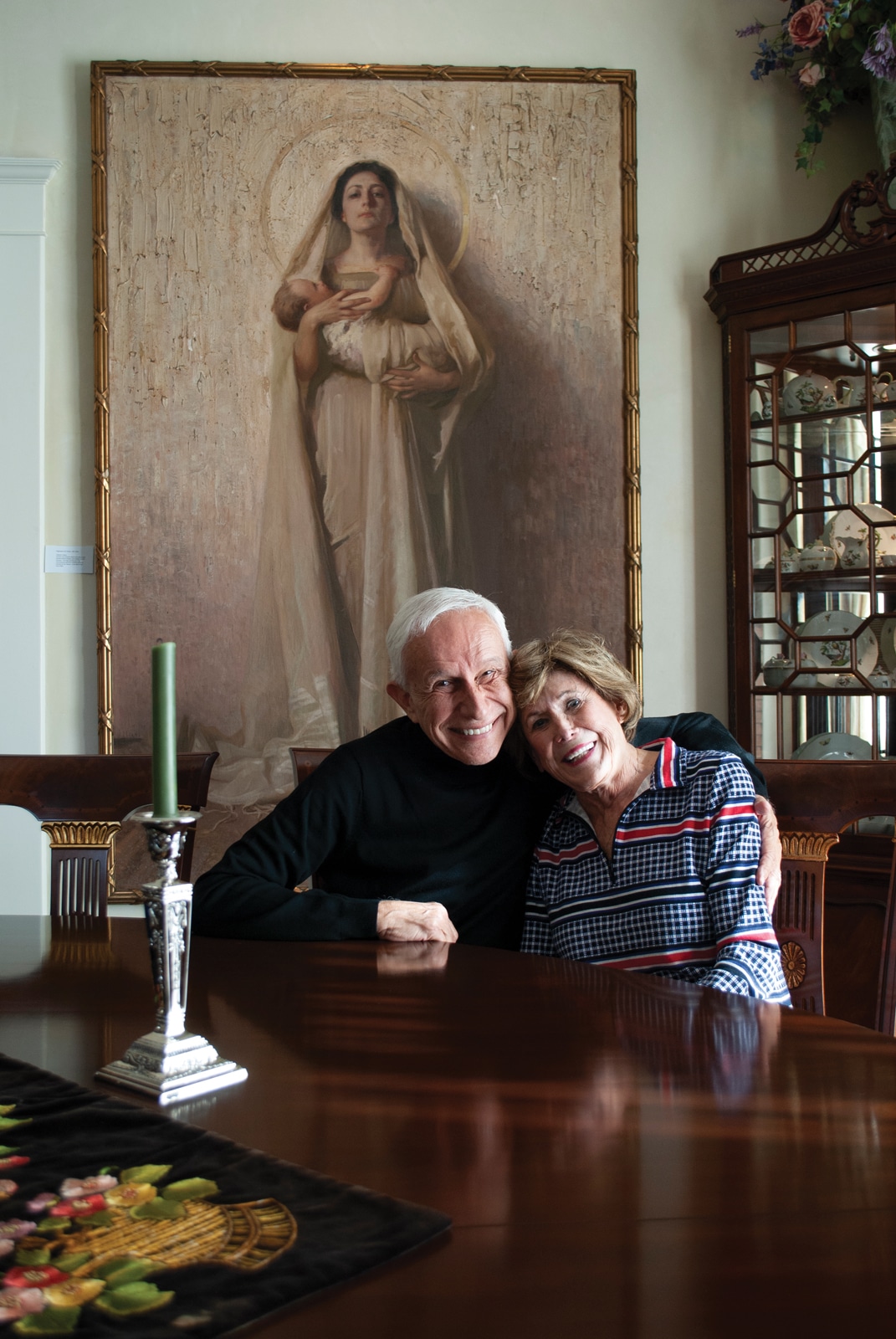 Malouf and Therese Abraham have made their homes in Canadian, Texas, sanctuaries of art. Barbara Brannon | Texas Plains Trail
0 Shares
0

O n an October afternoon among tree-lined heights of Canadian, Texas, a hint of fall in the air puts one in mind of the legendary cedar forests of the eastern Mediterranean. Perhaps it’s a stretch to compare this Panhandle river valley to the Orontes, but a visit to the stately home of Malouf and Therese Abraham draws my imagination to faraway places.

Only two generations back, Malouf’s ancestors were born in Lebanon and Syria. Therese’s were Irish Catholics in Boston. Together in Canadian the couple have made a uniquely American life—and a uniquely Texan one.

The story of how their paths crossed, and how these two aficionados brought their aptitudes and acquisitions to transform a city of less than 3,000 into a model arts community, is a multi-generational story of migration across place and culture.

Canadian, a railroad-and-ranching town and seat of Hemphill County, has always been a place apart, though.

When Malouf Abraham’s grandfather Na’im Ibrahim Ma’alouf, a “rag merchant” looking to escape Ottoman oppression roiling his region of Lebanon in 1912, brought his sample case full of fabric wares west from Amarillo, the housewives of Hemphill were the first along the route to cotton to his goods. Many kept homes in town though their husbands ranched on the broken lands along the Canadian River. Elegant linens, lace tablecloths, and fine scarves suited their tastes.

“They wanted fancy stuff,” says Malouf, his fine physician’s fingers gesturing in the air as though drawing out a shawl for a prospective buyer’s appraisal.

Within a year Na’im had set up shop on Canadian’s Main Street near the Santa Fe depot. The Fair Store sold clothing in the front and provided living quarters in the back. Thus equipped, Na’im sent for his wife and two young sons—who had no lack of trouble getting through Ellis Island under the family name of Ma’louf when the patriarch
had already anglicized his to Nahim Abraham.

The Abrahams preserved the lost surname, bestowing it on their first U.S.-born son, Malouf, known lifelong as “Oofie” for his childhood pronunciation. Oofie fit right into life in the Texas Panhandle, in due time marrying a descendant of early Hemphill County settlers and making a splash in oil and gas leases. Oofie and Iris gave the family name again to their eldest son, Malouf, Junior.

By then the first Abrahams had built an impressive three-story home in town, where they grew flowers in front and vegetables in back. And on the feast night of St. George, they invited friends and neighbors for a meal followed by a giant bonfire in the alley. Fatayer, kibbe balls, tabouli are some of the piquant dishes his grandmother served, Malouf recalls. “She ordered olive oil and pine nuts in bulk from the Europa Market in New York City, ingredients you couldn’t get in Canadian,” he says. She’d asked
a local nursery, however, where to get vines to plant—only for the leaves to stuff, not the fruit. “She didn’t care about the grapes.”

The second generation of Abrahams were generous, too, giving much of their good fortune to philanthropic causes. The third generation, says Malouf, developed career interests quite different from carpets and ready-to-wear lines. Malouf pursued medical studies, while Bill Ed chose banking. Malouf’s medical internship took him to Greensboro, North Carolina, where his next chapter would begin.

A MARRIAGE MADE IN MEDICINE

Therese Browne’s father had come to the Appalachian foothills town of Mount Airy, North Carolina, to manage the world’s largest open-faced granite quarry. White granite from Mount Airy had been prized for decades for street curbing and civic buildings, monuments and mausoleums. Fourteen miles from the Blue Ridge Parkway on the Virginia line, the city was known for its fall foliage, old-time music, and fine furniture-making; it would soon come to be known as the inspiration for television’s Mayberry, setting for The Andy Griffith Show. Mount Airy was the real-life hometown of the series’ star, who was ten years older than Therese.

Therese chose a career in nursing that brought her into contact with many up-and-coming doctors. But she’d never met one with the personality of Malouf.

Malouf would soon return to Texas to complete his medical training at Southwestern Medical School in Dallas. By 1963 he and Therese had both secured posts in Dallas, at the city’s largest health-care facility at the time, Parkland Hospital. They were engaged to be married at the end of the year.

One evening in November, the couple went out for an date on the down, to a trendy spot called Ruby’s Carousel Club.

A little over a week later, Therese lined up along Lemmon Avenue with scores of other people craning for a glimpse of President Kennedy’s motorcade making its way from Fort Worth on a rare visit to Texas. Malouf, who was down for a twelve-hour Friday shift at the hospital, couldn’t make it.

When word of a shooting spread through the break room beside the trauma unit where Malouf was about to grab a quick lunch, he set his tray down where he stood. “I never sat down. I ran,” he remembers. Treatment of Kennedy’s injuries, and those of Texas governor John Connally, was already under way, and there was little for Malouf to do but watch and pray. He opened the back door to the ambulance bay and saw the black Lincoln convertible rushed there by the Secret Service moments before. “What I remember,” Malouf said of the moment that remains vivid in his mind today, “was flowers and blood.”

Malouf’s professor and Parkland’s chief of neurosurgery, Dr. Kemp Clark, pronounced the president dead at one o’clock in the afternoon.

Malouf and Therese’s wedding took place December 28, but the groom would soon be caught up in another crisis. Not long after the recovering Gov. Connally conferred the doctor of medicine degree on him, Malouf received his military draft notice. He served four years in the Air Force medical corps during the Vietnam conflict, given charge of an allergy clinic in which he cared for soldiers suffering from respiratory ailments.

Captain Malouf Abraham developed homeopathic vaccines to inject minute amounts of allergens into his patients to stimulate their immune systems. For his work he was awarded the Air Force Commendation Medal, and after completing his tour of duty returned to Canadian to establish a successful medical clinic. There he continued to develop improved allergy remedies. By the time he retired in 2001, reported Lubbock’s KCBD-TV, some “46,000 people had traveled from around the country to the tiny Panhandle town to be treated.”

TURNING POINTS IN COLLECTION AND PRESERVATION

Investments and inventions had been kind to the Abrahams, to be sure. But back in the early 1970s they still had young children to raise, and Dr. Abraham had a practice to build.

On a trip to New York City, Malouf and Therese had no expectation of acquiring a major work of art. A famous magazine illustration by Norman Rockwell, “First Day of School,” spoke to them. Perhaps it was the confluence of themes that resonated with the couple, from public education to blossoming romance to student sheepishness. The painting they purchased launched a passion for collecting that would occupy many more trips to New York and beyond, and a commitment to exhibiting fine art for public edification and enjoyment.

Five years later the Abrahams made a large purchase back home in Canadian that had their neighbors wondering if they’d taken leave of their senses.

Now, Malouf and Therese have made some unusual acquisitions: Gerard Byrne’s jazzy “Light Revelry” alongside a Leyendecker “Madonna and Child.” A Melvin Warren horseback scene, juxtaposed with serene Joseph Stella watercolors. Sensuous works by Viktorija Buklava. And quite a few more Rockwells.

But nothing like rescuing a desanctified church building, complete with Ionic columns, curved balcony, and soaring leaded-glass windows, that was facing the wrecking ball.

The 1910 landmark on Sixth Street at Nelson Avenue became the Abrahams’ home. Resurrected with extensive renovations and rechristened the Citadelle Mansion, the 8,000-square-foot structure became both family residence and art gallery. And when, in 2007, Malouf and Therese were ready to move into more traditional quarters, they simply trucked their personal possessions right down the street to another historic home, Hill Crest, while leaving the art collection behind for visitors’ appreciation.

Therese calls my attention to the many mature trees that line their street and other quarters of Canadian. Serving on the area’s Regional Planning Commission and observing that the water table in the valley allowed for trees to flourish more readily than in other Panhandle towns, she and Malouf began a tradition of giving away seedlings—more than two hundred each spring, and numbering more than five thousand throughout Canadian by now.

A GIFT OF ART

The Citadelle Art Foundation today occupies the former church as well as a purpose-built gallery for touring exhibitions, the Iris and Oofie Abraham Gallery. Gardens and gift shop enhance the site as well. Not many months past, the board of the Texas Plains Trail Region, hosted by Citadelle director and Plains Trail board member Wendie Cook, were privileged to deliberate and discuss business in the gallery as five-hundred-year-old portraits by Rembrandt himself looked on.

My favorite of the treasures housed in the Citadelle’s permanent collection, however, is a sumptuous oil by J. C. Leyendecker, quintessential immigrant illustrator. The “Couple Descending a Staircase” he painted for an Arrow Collar advertisement captures the baroque glamour and geometric rhythm of the Jazz Age. It is as American as Rockwell but as exotic as any of the Bouguereaus on the museum’s walls.

The Citadelle brings thousands of patrons and students annually into contact with styles and subjects of art they might not experience outside of major metropolises. From eclectic and ephemeral tape art—installations meant to enliven non-museum spaces like Walmarts—to the world-class exhibition of Rembrandt etchings, the legacy of the Abrahams is to connect diverse cultures and show viewers the humanity they hold in common.

Humanity, indeed, is the common thread I see in their long and productive lives. Malouf indicates a crazy-quilt canvas by Byrne hanging in the back foyer of Hill Crest as we stroll toward the dining room. “See, our guests just party too much,” he quips, as Therese leads me to a display of a traditional mother-of-pearl inlaid tableau, a relic of Nahim’s Old Country, depicting the Last Supper.

The cloth centerpiece is likewise of Lebanese crafting, its deep green-black velvet embellished with silk threads. I think of those temperance-minded Canadian wives who longed for the touch of luxury that one Middle Eastern merchant happened to unfold at their door. I know that every corner of city and country needs both beauty and meaning.

Malouf and Therese have sensed this from the start, and have turned their heritage into a gift that continues to give. He raises and then joins his hands, ever expressive, in a summary gesture. “We just want to leave the world a better place.”