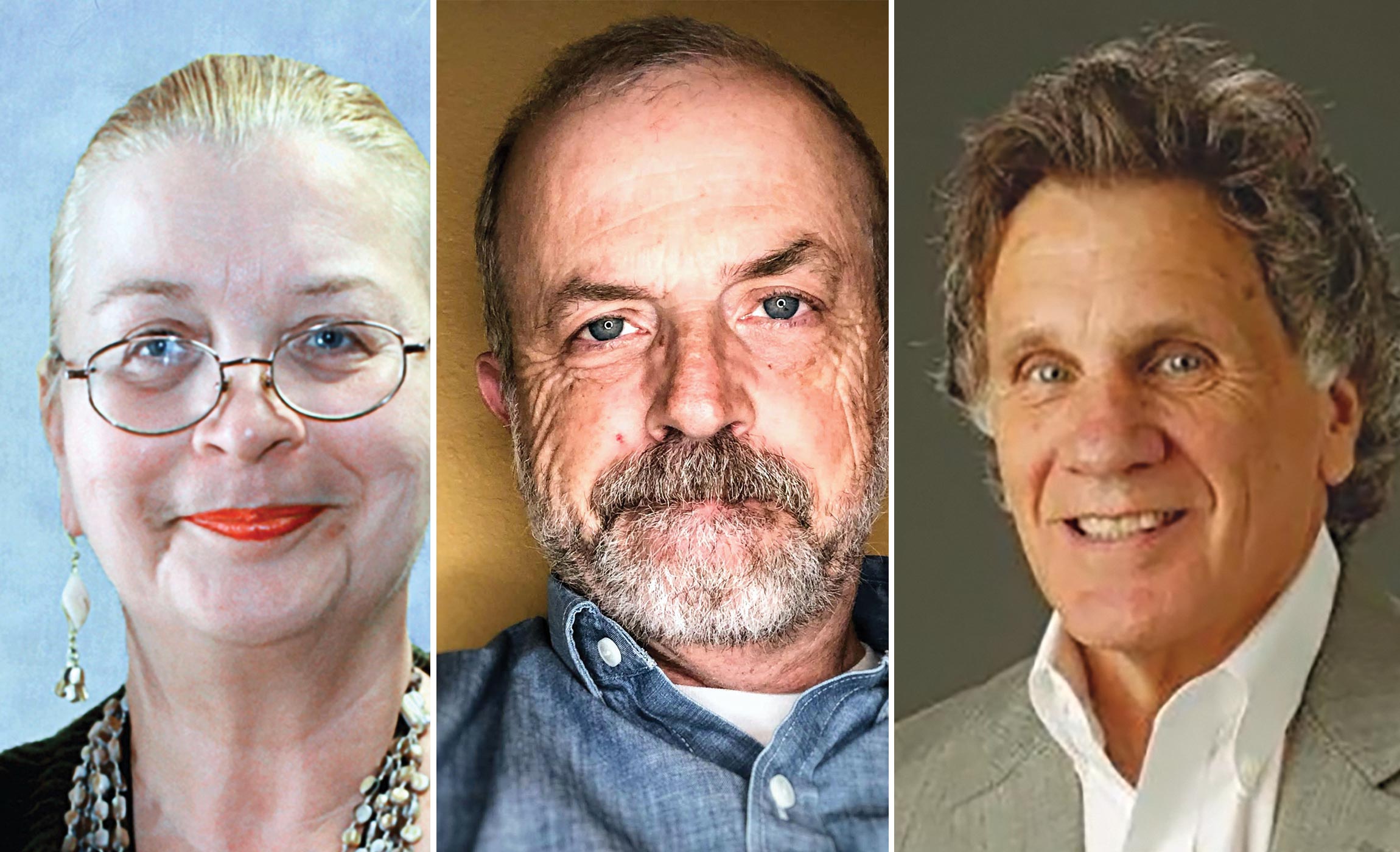 Joe Holley, Paula Allen and Joe Herring all learn something new about something old every week and eagerly share discoveries with readers of their popular newspaper columns rooted in history. Each in his or her own way contributes to the richness of Texas literature with the retelling of tales about those old places and the fascinating people that give depth and context to the storylines.

In Hometown Texas, a collection of his colorful columns published in book form, Holley says crisscrossing the Lone Star State to McCook, Sabine Pass, Hawkins, Aurora, Dubina, Bigfoot and lots of spots in between caused him to focus on “intriguing people, the pervasive influence of place and the enduring significance of the past on present-day lives.”

A varied career path in print journalism from coast to coast led Holley to the Houston Chronicle in 2009. He began writing his “Native Texan” column in 2013 and devoted full time to it after retiring as an editorial writer in 2017 and earning nomination as a Pulitzer Prize finalist.

“A Chronicle editor was looking for more narrative journalism in the paper,” Holley recalls. “He realized I had an extensive Texas background and suggested I try a weekly column about the state’s past, its people and particularly its small towns. When I previously worked at the Washington Post, I also taught a class each semester at George Washington University. I told my students one day that my unofficial beat at the Post was writing about eccentric Texans. ‘Gee, Mr. Holley, you sure must be busy,’ a young woman observed.”

The Waco native traces his penchant for writing about Texans and their hometowns to when he was 4 or 5 years old. His dad had a potato chip route, and every weekday, he would drive to little towns within a 50-mile radius of Waco. During summers and holidays, Holley was his helper.

“I gradually came to realize that Cameron or Belton or Rosebud or Marlin each had personalities of their own, like people,” he says. “That interested me. Having lived in Texas off and on for most of my life, I know the state, I’ve written about it for years and I’m still intrigued by its richness and diversity. I write what I know, what I’ve read about, what I’d like to know or what column readers suggest. In fact, I get a lot of ideas from reader suggestions.”

The same holds true for Allen, who’s been writing a question-and-answer column on local history for the San Antonio Express-News since 1992.

“I didn’t have a background in history, much less Texas history,” says the former New Yorker who came to San Antonio in 1985 after working in the book-publishing business. “I inherited a feature called “S. A. Questionnaire.” It started out as short answers to any kind of questions about San Antonio, but after we got some really popular questions about local history, our readers turned it into a history column.”

Questions that changed the column’s focus included one from a man who moved back to San Antonio after retirement and wondered what happened to the “healthy pool” he remembered swimming in as a child and teenager. Allen’s research showed that Terrell Wells, fed by sulfurous spring water, closed in the 1960s but once occupied a site where McCollum High School sits today. “This query led to so many readers writing about their memories and sending photos,” she says, “so we ended up publishing two more columns and a picture page.”

Allen relishes “the thrill of the chase,” hunting down the elusive fact or reliable confirmation.  That has gotten somewhat easier these days with the growth of online resources. But she still relies on experts in many subfields of local history such as German Texans, HemisFair ’68 or the San Antonio River and its tributaries.

“The kind of history the column looks into tends to be microhistory—the small details of a particular place or life that help fill in a larger picture,” she explains. “It’s color and detail that attract me because it’s as close as we’ll get to getting to know people who lived, in many cases, long before we were born. If you enjoy expanding your circle of acquaintance, you can enjoy local history.”

Although she’s been writing her column for more than a quarter century, Allen says she learns new lessons every week.

During the COVID-19 pandemic, Allen was asked to write columns about previous epidemics—cholera in 1849, influenza in 1918, polio in 1946. “It was startling to see, even though these illnesses are different, how people in those times went through the same sort of challenges we’re facing,” she says.  “It can help us learn about what worked and what didn’t in earlier times. They were just people like ourselves, feeling their way through difficult situations.”

Allen’s column led to her involvement in a book project, San Antonio Then and Now, in 2005 and a second edition in 2010. She got to select the “then” photos and write the text. Another book of her most popular columns is currently under consideration.

Kerrville native Herring, who once served as the scenic Hill Country city’s mayor and who superintends the family’s printing business, is now working on his fourth book of columns published in the Kerrville Daily Times.

“I started writing a weekly column for the Times in 1994,” Herring says. “It was a bit of a fluke.  A friend of mine was the newspaper’s lifestyles editor, and one of her columnists was inconsistent…missing deadlines, for instance, so she offered me a slot. It wasn’t a job I sought or dreamt of. I am good with deadlines, though!”

Like Allen, Herring relies to a great extent on readers for column ideas. People bring him their ancestors’ diaries or journals, and he gets particularly excited about old photographs.

“I love photographs because they really tell a story,” Herring says. “Sometimes, at the edge of the frame, you can really learn something new and unexpected. I have around 5,000 historic photographs of Kerrville, Kerr County and the Texas Hill Country in my collection.”

In a sense, the column has constituted Herring’s backstage pass, “opening a lot of doors for me. I get to see inside historic sites as well as study old documents and photographs that would not be available to me otherwise.”

His favorite columns solve a mystery about local history or debunk a long-held historical belief. “The trick is to make history interesting and entertaining,” Herring contends. “I think most of my readers would say they never liked history when they were in grade school, but they like the stories I tell about our community’s past.  A community is stronger if it knows its story.”

Herring and Allen agree with Holley that “writing a column is sort of like writing a sonnet.  There’s a precise amount of space to fill, no more or no less.” The three enjoy the challenge of getting a story told within that space, finding out new things and sharing those discoveries with their readers.

“History is people,” Holley adds. “People aren’t boring. Their stories may be offered up in boring ways, but that’s not history’s fault.”

Having immersed themselves in Texas history for many years, the columnists have identified some of their must-see-and-experience historical places in their areas.

Joe Holley: San Felipe de Austin State Historic Site on IH-10 near Sealy, where in 1823 Stephen F. Austin established a headquarters for his colony in Mexican Texas; San Jacinto Museum and Monument east of Houston, site of the decisive battle of the Texas Revolution against Mexico in 1836; the Bryan Museum in Galveston that showcases original art and artifacts of Texas and the American West.

Paula Allen: The Alamo in downtown San Antonio and the rest of the Spanish colonial missions along the San Antonio River south of downtown (Mission Espada being her favorite because of its quiet, relatively unspoiled setting); the Steves Homestead (right) in San Antonio’s King William District, a meticulously furnished, late-19th-century home of an affluent family “that’s almost like time traveling.”

Joe Herring: Polly’s Chapel (left) on Privilege Creek near Bandera, built by early settler José Policarpio “Polly” Rodriguez; Old Camp Verde between Kerrville and Bandera, site of the Army’s experiment with camels as pack animals before the Civil War; Charles Schreiner Mansion in downtown Kerrville, “not bad for an immigrant with little formal education, orphaned as a teenager.”