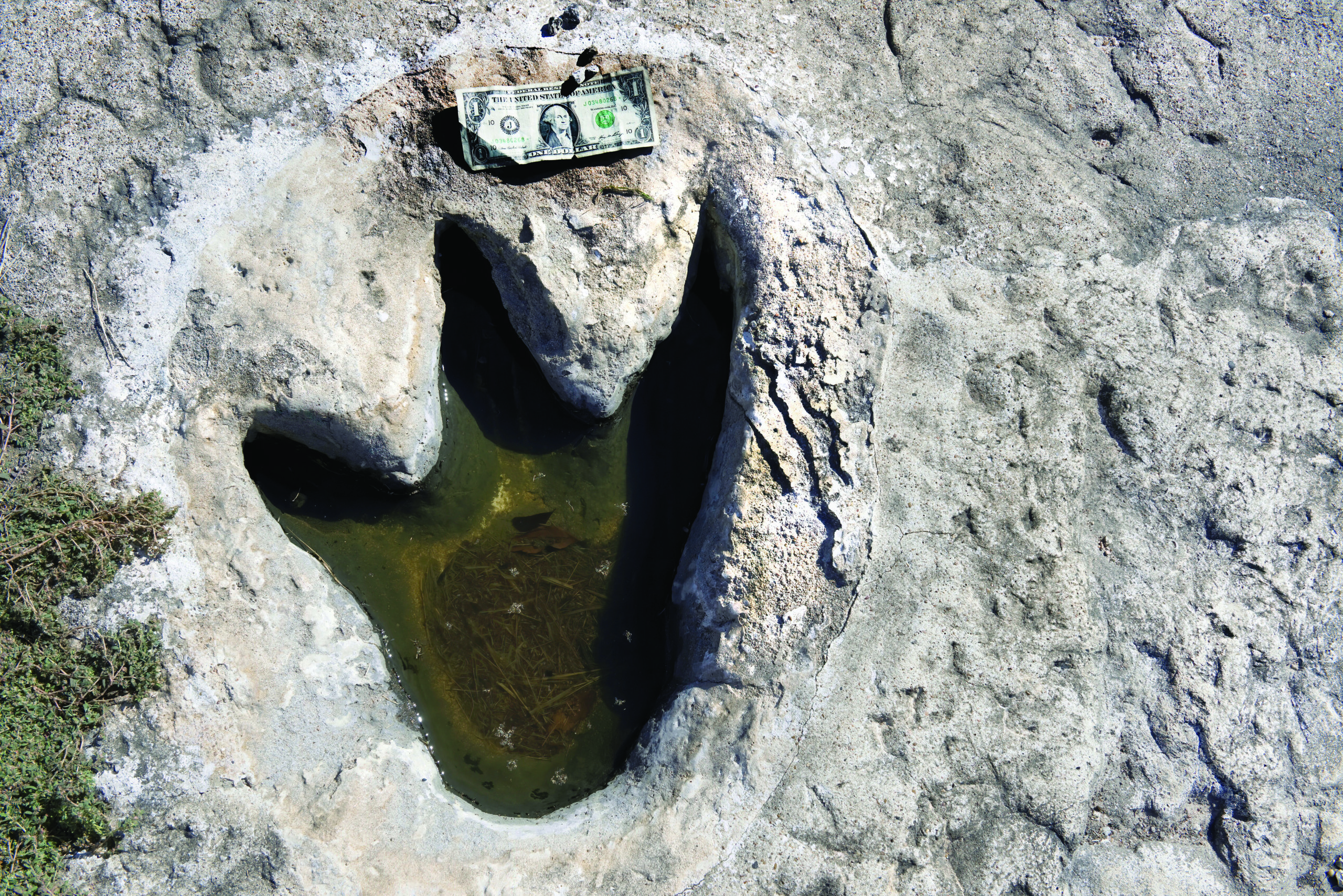 Established by George Barnard as a trading post in 1849, Glen Rose is located at a picturesque spot on the Paluxy River where it flows into the famed Brazos River. However, distinctive footprints of at least two earlier inhabitants have made this community known far and wide as the Official Dinosaur Capital of Texas.

Approximately 113 million years ago, what is known today as the Glen Rose area was along an ancient sea coastline. Dinosaurs roamed the area and left their imprints on what is now known as the Paluxy River. Their footprints were preserved and buried under sediment to be discovered millions of years later. Geologists classify this layer as Lower Cretaceous limestone. Few fossil dinosaur bones have been found in the area, but dinosaur tracks have left a legacy for others to discover.

Covering the area in and around the Paluxy River, two main dinosaur tracks were discovered. Most of these tracks are thought to be juvenile tracks. The  Acrocanthosaurus and the Sauroposeidon Proteles were the two most prominent dinosaurs in the area. One, a meat eater and the other a plant eater. This discovery of tracks led to new scientific thinking on many levels in researching what dinosaurs made these tracks.

The  Acrocanthosaurus (meaning “high-spined lizard”) is said to be the fourth largest meat-eating dinosaur of the Mesozoic Era. Their neck and spine were punctuated with foot-long “neural spines,” which clearly supported some kind of hump, ridge or short sail. The function of this accessory is unclear: it may have been a sexually selected characteristic (males with bigger humps got to mate with more females), or perhaps it was employed as an intra-pack signaling device.

Acrocanthosaurus is one of the few dinosaurs for which we know the detailed structure of its brain – thanks to an “endocast” of its skull created by computed tomography. This predator’s brain was roughly S-shaped, with prominent olfactory lobes that show a highly developed sense of smell. Intriguingly, the orientation of this theropod’s semicircular canals (the organs in the inner ears responsible for balance) implies that it tilted its head a full 25 percent below the horizontal position.

These dinosaurs were typically around 35 feet long and weighed five to six tons; they could be considered the “great-great-grandfather” of the more common dinosaur known as Tyrannosaurus Rex (T-Rex). The three-toed theropod track marks can be found all along the area. For millions of years, they were considered the apex predator of North America. A dinosaur of this size needed to subsist on comparably big prey, which leads us to our second dinosaur.

The Sauroposeidon Proteles (meaning “lizard earthquake god”) has had many names since its discovery, but scientists have ultimately decided upon this term. The local popular name of its past was the Pauluxysaurus Jonesi, being that their tracks were discovered in the Paluxy River. Its neck was about a third longer than its closest relative, the Brachiosaurus. The individual vertebrae in his neck measured four foot long and looked more like tree trunks than spinal bones. It is thought that when these creatures walked, the whole earth shook.

Sauroposeidon was a plant eater. Due to the vast neck length, it is believed these creatures would not have been able to feed off the tops of trees but, instead swung their necks side to side to feed off the forest floor like a vacuum cleaner.

Typically 64 feet in length and weighing around 12.5 tons, this dinosaur is the largest known of the species. In the beginning, scientists believed that Sauropods lived in water due to their size. The Paluxy River tracks proved otherwise. Their tracks are large, rounded tracks much like those of an elephant. It is believed that once the dinosaurs reached full maturity, they would have been virtually safe from any carnivorous predator.

In 1908, a flood roared down the Paluxy River and washed out almost everything in its way. A year later, 9-year-old George Adams was playing down by the river when he found large three-toed tracks.

R.T. Bird, a fossil collector from New York, came to the area around twenty years later and discovered Sauropod tracks along with the Theropod tracks. The tracks were the first proof that Sauropods walked on land. Many scientists came to the area to research and excavate some of these tracks. Some of the original tracks are on display at the American Museum of Natural History in New York.

In 1972, approximately 1,587 acres of land in this area was dedicated and became Dinosaur Valley State Park, one of Texas’s premier State Parks. Its mission: to preserve these valuable dinosaur track sites and allow people to learn from them.

Because the Paluxy River is one of the fastest rivers in Texas the tracks constantly face erosion and being covered up. Park staff and volunteers keep the tracks cleaned out and maintained for visitors to explore when the river allows. As the river runs its course it also uncovers new secrets of the past. Just this past summer severe drought conditions exposed dinosaur tracks that were previously hidden.

Dinosaur Valley State Park has two main track sites. The first one is the “Main Track Site”. At the “Main Track Site” visitors can see examples of the two types of dinosaurs that left tracks in the river. The second track site is called “The Ballroom” because of the hundreds of tracks moving about in all different directions as if the dinosaurs had been dancing when the prints were left. Both the  Acrocanthosaurus and the Sauroposeidon tracks are found here. The best time of year for visibility is in the summer when the river is low or dried up.

Also featured at the state park near the gift shop are models of a 70-foot Apatosaurus and a 45-foot Tyrannosaurus Rex. These fiberglass models were displayed at the 1964-65 New York World’s Fair and then donated to the park in 1970 where they remain on display today.

The primary trail consisted of 136 consecutive tracks extending over 400 feet. The prints are deep and very detailed. The uncovering and cleaning of these trails was done between September and October 2000. Leading dinosaur track authorities have acknowledged that they do not know of any other single consecutive trail in North America that are this long. The length and preservation of this trackway make this one of the best displays of dinosaur tracks in the world. The trail eventually ran out upstream due to erosion for about 30 feet then the trail picks up again with another twenty-one consecutive tracks. This makes a total of 157 tracks, extending over 500 feet. A second trail of twenty consecutive tracks was discovered beside the first trail downstream going the opposite direction. A third trail of twelve tracks was found below the first two.

Notes from investigations of the area in 1971 indicate that Mike Turnage detected the long trail with his feet while wading chest deep in the river. He was able to place his feet in 100 of the dinosaur tracks at the time. The average depth of each track was approximately 6 inches, and the average length is 15 inches. The discovery by these two people, appropriately inspired the name “The Turnage Patton Trail.”

UP CLOSE AND LIFE-SIZED

Just around the corner from Dinosaur Valley State Park, your prehistoric imagination can run wild at Dinosaur World. This attraction features 150 life-size dinosaurs along a meandering paved path; signage displays the name of the dinosaur with details about the type of dinosaur, when they existed and where they roamed. The site also boasts indoor animatronic dinosaur displays, fossil replicas and natural fossils, a dinosaur dig for the kids, and a playground.

The Creation Evidence Museum has an impressive collection of artifacts and fossils, which provide evidence for a young earth; hosts annual “Dino Digs” for students of all ages; presents a monthly Director’s Lecture Series; and features a Noah’s Ark Replica. The Museum is nearing completion of the Dino Discovery Lab, a high-tech lab to study dinosaur bones.

Think of Glen Rose as your “Dinosaur Destination” with a few fossils thrown in! The historic Gazebo on the Courthouse Square has a track from the  Acrocanthosaurus. The Somervell County Museum, also on the square, is another great place to not only check out our primordial history but discover more recent aspects of our rich heritage. Plan your stay now and come play where the dinosaurs roamed!

Annual Dino Dive at Dinosaur Valley State Park
Held for the past 6 years on New Year’s Day, participants jump into the frigid Paluxy River to kick off the new year! Check for details at fdvsp.com.

Fossil Rim Wildlife Center
Where Africa comes to Texas and visitors drive along a safari trail through this 1,800-acre wildlife preserve.
fossilrim.org

The Promise
A one-of-a-kind outdoor musical production telling the story of the life of Jesus Christ.
thepromiseglenrose.com

Kelly Harris is the Tourism Director for Glen Rose Somervell County. She also represents the City of Glen Rose as a council member, serves on the Prehistoric Texas Board of Directors and as Vice President of Somervell History Foundation.