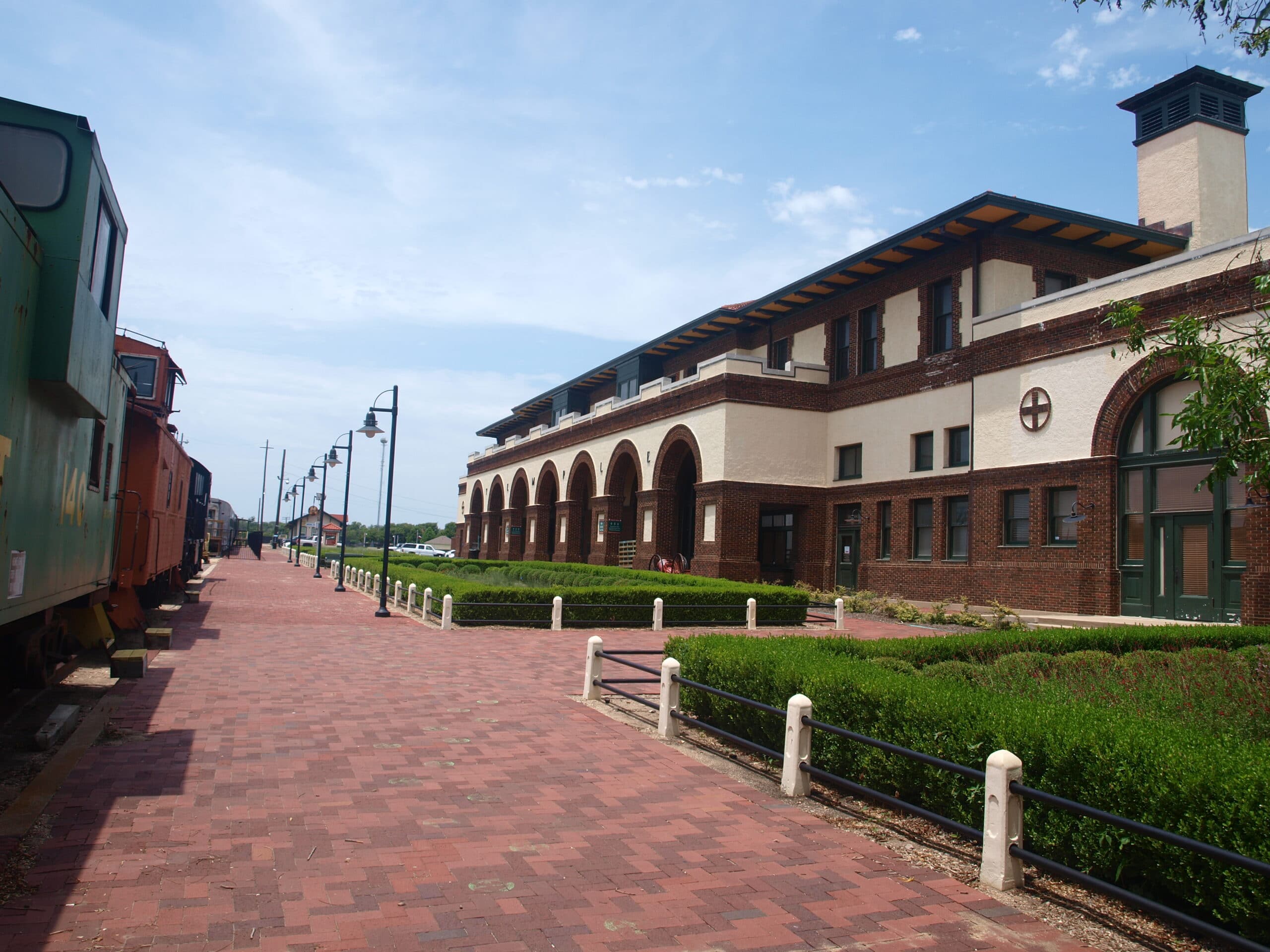 One of the most charming stops in the Brazos Trail Region is Temple’s 25,000- square-foot Santa Fe Depot, which is also the showpiece of recent multifaceted downtown redevelopment. Constructed in 1910, the imposing depot serves as a busy Amtrak Station, the Temple Visitor Center, and the interactive Temple Railroad and Heritage Museum.

Historically, Temple is bound by steel rails. Medical care, downtown business and strategic planning continue to have deep ties to Temple’s railroad heritage. Within a decade of its founding by the Gulf, Colorado and Santa Fe Railway in 1881, the city developed into the second most favored town on the line, next to Galveston, the company’s headquarters. Initially, a boxcar served as the depot but was replaced by a one-story and then a two-story building. Between 1876 and 1886, Texas railroad mileage quadrupled as track construction intensified. Railroad officials determined a new building in Temple was needed that could serve passengers and house offices.

By the early 1990s, the depot was no longer used and scheduled for the wrecking ball. Temple citizens, aided by loud outcries from railroad aficionados across the state, struggled to preserve the distinctive structure. The city purchased the depot and surrounding acreage in 1995; the Texas Department of Transportation awarded the city a grant of $2.4 million, part of a federal transportation grant, and the city invested additional funds for restoration.

Today, true to its original intent, the depot serves the needs of rail passengers as it houses an Amtrak station. Rail ridership remains strong: the Temple station handled more than 16,000 passengers in 2017, a six percent increase over previous years.

The Temple Railroad and Heritage Museum is known for its extensive collection. Downstairs, visitors may view permanent exhibits from passengers’ experiences; upstairs is devoted to the actual technology and skills involved in managing a vast rail system. Rotating exhibits also reflect the wide-ranging influence of transportation, technology and social history.

The museum’s collection of railroad equipment is displayed on the grounds next to an active railroad yard where visitors can observe daily train operations and traffic.

Thanks to a recent downtown urban renewal project, the Depot is the centerpiece of the Santa Fe Plaza redevelopment, which is adding offices, outdoor stages, fountains and parks to Temple’s historic commercial center. The Santa Fe Market Trail, a linear, walkable park walkway, follows along the railroad tracks to the new Martin Luther King Festival Grounds.