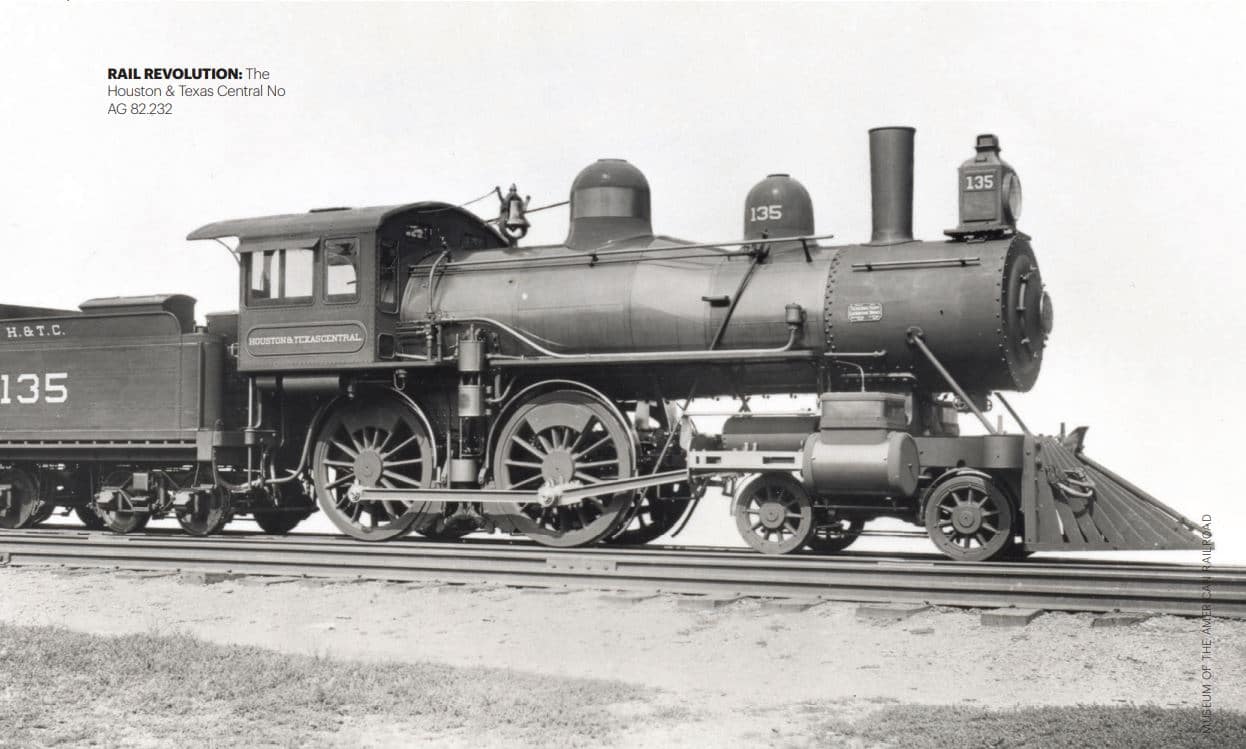 To many, the mention of Texas history conjures up the Battle of the Alamo, cattle drives and oil strikes. To be sure, these were defining events that shaped the growth and culture of the state. But like so many other corners of our nation, the coming of the railroad stands as one of the most significant events in Texas history. The early years of construction touched off a period of growth and prosperity that is still felt today.

Establishing railroads to move people and goods was a priority even before statehood. Dating back to 1836, leaders of the new Republic of Texas passed legislation to allow rail companies to be chartered and construct lines. However, it wasn’t until 1853 that a short line near Houston was completed, opening the era of railroad development in the state.

A handful of other lines were chartered and construction was underway around Houston before the Civil War strained resources and halted any significant progress. But by 1870, railroad construction was about to take off and span the entire state. What made Texas different from other states was the sheer size and vast distance between populated areas. Railroad construction required enormous investment and was largely based on speculation that more population would follow along the new lines.

The fledgling lines around Houston and Galveston had the advantage of established population centers and Gulf ports — both ingredients for successful investment in rail. But if the state was to become part of the growing national network of rail lines and benefit from post-Civil War Reconstruction, new routes would have to extend to the Red River and beyond. Likewise, an east-west line was essential to attract transcontinental traffic from the southeastern to southwestern U.S. — bearing in mind that the distance across the state was equal to that of traveling to Chicago.

By 1870, two significant events would enable construction of the first north-south and east-west rail lines across the state. The Texas Legislature passed a bill requiring any railroad constructing lines in Texas to also incorporate within the state, which was a brilliant move. Further skillful maneuvering by local politicians in North Texas determined the route these new lines would take. Construction northward by the Houston and Texas Central Railway (H&TC, formerly the Galveston and Red River Railroad) began in earnest in 1867, reaching Dallas in 1872 and the Red River by 1873.

Completion of the line at the state’s northern boundary was a major accomplishment, as a connection was to be established with the Missouri-Kansas-Texas Railroad (M-K-T), which had terminated just south of the Red River. Known as the “Katy,” the line had built southward through Indian Territory, creating direct access to Kansas City, St. Louis and points north and east.

The connection was not without its share of controversy. There was much to gain economically by creating a community where the railroads met. The H&TC and M-K-T both had plans to establish a town at the end of their lines; however, the location of the town was still in question. As a result, a direct connection was not yet established, causing costly delays in shipments and travel. Further, freight and passengers were subject to unreasonable tariffs as part of the transfer process from one railroad to another. This costly bottleneck was effecting all traffic into and out of Texas. Many months of squabbling ensued until Dallas weighed in on the argument. Several prominent leaders threatened to “come up there and straighten it out for them” if the railroads didn’t come to an agreement. Finally, a direct connection was accomplished, and the location of a new town was established. What was originally to be named Red River City soon became the town of Denison, named after one of M-K-T’s vice presidents.

The new rail connection between Texas and the Midwest was transformational for the state. It enabled huge increases in commerce between major Texas cities that were once isolated from the rest of the nation. Cotton and agricultural products that previously had to sail from the Port of Galveston through the Gulf and then up the Eastern Seaboard to markets could now be shipped inland in far less time. Inversely, machine tools and manufactured goods could economically and logistically reach Texas from northern producers. As a result, Texas was quickly becoming an agricultural and manufacturing center for the rest of the nation.

The H&TC line was also benefiting the state in many localities. As the railroad built north from Houston, enterprising merchants followed the progression of the line, selling much-needed wares to railroad workers and settlers. Towns were established along the route where water stops, maintenance facilities and crew bases were necessary. When line construction reached Dallas in 1872, many merchants decided to settle in the town of a mere 3,000 inhabitants on speculation that an east-west railroad would intersect at that point.

The names of those merchants became household words in Dallas for many years. Largely Jewish immigrants who came to Texas through the Port of Galveston, they established businesses providing necessary goods for a burgeoning town. Stores bearing the names E. M. Kahn, A. Harris & Company, Sanger Brothers, Titche-Goettinger and later Neiman Marcus offered basic items, but more importantly brought an Eastern influence to Dallas, which had a lasting effect on the culture of the city.

The gamble these early entrepreneurs made on Dallas paid off just one year after the arrival of the H&TC. The first eastwest trans-Texas line (a far more ambitious endeavor) was created by federal charter in 1871, ultimately forming the Texas and Pacific Railway (T&P). Initially, the line was formed by a few existing railroads in East Texas that were strategically acquired as the T&P sought to build westward through the state. These initial lines already had connections in Louisiana and points east. The T&P continued construction, reaching Dallas in 1873, making the city the first major rail intersection in Texas and among the most significant in the southwestern United States. Dallas’ population would mushroom, more than tripling by 1880.

Like so many communities across the country, the intersection of the H&TC and T&P in Dallas was no accident. Communities and landowners vied for routing and intersections of rail lines across the state, wanting to cash in on the economic prosperity of the new form of travel. When the route of the T&P was being decided in Austin, the intersection with the H&TC was established by careful maneuvering by Dallas politicians. During deliberations, these local representatives were successful in requiring the junction to be within one mile of Browder’s Springs. Before any opposition could be raised, a bill was passed granting the requirement because the location was not known to those who may have raised opposition. As it turns out, Browder’s Springs was within a mile of the Dallas County Courthouse.

The arrival of the T&P in Dallas set the city on a course for economic prosperity, ultimately becoming the center for commerce in the Southwest. Unfortunately it would have to wait a few years, as the Panic of 1873 slowed the economy and halted line construction. Local investment was needed if the railroad was to continue westward. Through land grants, incentive payments and local labor, the T&P finally reached Fort Worth in 1876. The railroad reached Sierra Blanca in 1881, connecting with Southern Pacific’s line to El Paso and California. Texas was now an important link on the first southern transcontinental rail route.

The H&TC and T&P lines were but the beginning of a vast network of rail lines throughout the state. Within a few short years, Texas would see construction of additional important transcontinental links to the national system. Through skillful politics, land grants, local capital, line acquisitions and sheer fortitude, the state was crisscrossed by literally hundreds of railroads. Some lines never made it off paper, others were acquired shortly into the construction phase. In later years, mergers and consolidation would reduce the number of companies to a mere handful. Texas went from 20 miles of railroad in 1853 (less than 1 percent of national rail mileage) to a peak of 17,000 miles in 1931, part of a national network of 250,000 miles.

Today, while rail mileage has diminished from its peak through mergers, consolidations and abandonment of unprofitable routes, railroads still play a critical role in Texas’ commerce. Lines with colorful names such as the Buffalo Bayou, Brazos and Colorado Railway and the Galveston, Harrisburg and San Antonio Railway have given way to mega railroads like BNSF and Union Pacific, as well as Kansas City Southern. Feeding into these major lines are a multitude of short line railroads that absorbed local operations of the major carriers. Together, they continue to haul bulk materials such as aggregates for concrete production, along with automobiles and intermodal traffic bearing consumer goods.

Passenger rail is experiencing a resurgence in the state, with light rail and commuter systems springing up in nearly every metropolitan area. Through local, state and federal investment, these systems are the result of responsible urban planning as Texas cities grow and flourish, ensuring mobility through safe, reliable transportation. Amtrak serves the state through three routes: the Chicago-Dallas-Fort Worth-San Antonio Texas Eagle, the New Orleans-Houston-San Antonio-El Paso-Los Angeles Sunset Limited, and the Fort Worth-Oklahoma City Heartland Flyer. And Texas may soon become the first state to debut high-speed rail outside of the northeast as the Dallas-Houston Texas Central line anticipates construction in a few years.

The discovery of many remaining examples of Texas’ rich railroad heritage awaits tourists and historians. Railroad museums, preserved depots, and abandoned rights-of-way (some converted to hike & bike trails) are numerous throughout the state. The next time you stop at a railroad crossing, consider the enormous impact this mode of transportation has had on Texas for more than 165 years.

Robert (Bob) H. LaPrelle has been involved in museum administration and historic railway preservation for more than 30 years. He’s served as chief executive officer of the Museum of the American Railroad in Dallas since 1988.