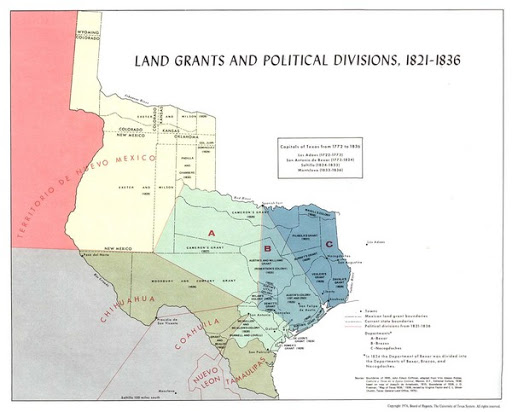 How did aspiring landowners come to the future Lone Star State? One of the state’s most respected historians helps readers and visitors appreciate the earliest transfers of land title to immigrants, and the forces driving them, that have yielded the distinctive character of Texas.

Land grant characteristics — shape, area, location, legal status — evince the nature and extent of settlement on Mexico’s northeastern frontier. Understanding the differences and similarities in the sizes, uses and legal forms of Spanish and Mexican land grants — and the process by which these grants were recorded — is important to fully appreciate Texas’ development from the time it was first settled in the early 18th century through Texas independence and beyond.

Despite a persistent misconception that Spanish and Mexican frontiersmen were lacking in drive and resourcefulness, it was economic incentives, geographic and geological attractions, and the human resources to fully occupy a vast and remote region of North America that prevented the full development of Texas.

Ironically, given the importance that oil would play in the development of 20th-century Texas, the region lacked the mineral wealth that might attract large numbers of Spanish colonials. Climatic conditions made farming possible only under irrigation. Ranching, the one economic activity for which the area was best suited at the time, was ubiquitous to most of northern New Spain, and important cattle and sheep operations closer to colonial markets made this activity less profitable in more remote areas. Mountain ranges, broad stretches of desert and semi-desert, and unnavigable rivers and limited water resources formed natural barriers to Hispanic advance. Limited demo- graphic growth and resistant indigenous populations meant a lack of people with which to fill the empty spaces.

In the absence of economic, water or demographic pressures, Texas remained a buffer zone throughout the 18th century. Consequently, land distribution in the Spanish province of Texas — an area which in Spanish and Mexican days did not include far-southern and far-western present-day Texas — was often haphazard and imprecise. Only a handful of rural land grant documents survive, most along the San Antonio River valley and in East Texas around Nacogdoches. These grants took up long stretches along river and creek banks and ranged in size from approximately 5,000 to more than 60,000 acres.

This isn’t to say there were no conflicts; in 18th-century San Antonio, numerous disputes erupted between missions and civilian ranchers over property and cattle rights. In the 1730s, conflicts centered on water rights in the San Antonio River; the following decade over mission Indian labor and the proximity of missions and town; and in the 1760s and 1770s over ranch land and cattle ownership. However, in the isolation of the frontier, with the constant threat of Indian attack and the costs of legally establishing ownership, compromise and accommodation were the normal results of disputes.

Then, in the early 19th century, the period following Louisiana’s sale to the United States was one of furious activity on the part of Crown officials in promoting settlement of the border province. New settlements were founded on the Trinity and San Marcos rivers, ranch titles were issued to a number of Bexareños and Nacogdocheans, and the province’s population was reinforced by the introduction of military forces from neighboring jurisdictions. This spurt of growth, between 1801 and 1812, was interrupted and, in fact, reversed, by the Gutiérrez-Magee invasion during which a largely American force captured the province. After Commandant General Joaquín Arredondo retook Texas in August 1813, the province was marked by a prolonged period of Indian hostilities, crop failures and economic stagnation. At independence, Texas was no better off than it had been a generation earlier.

In that section of the Rio Grande that today separates Texas from Coahuila, land grants weren’t of great importance during the Spanish period. The settlement and missions of San Juan Bautista del Río Grande — today’s Guerrero, Coahuila — enjoyed use of lands on both sides of the river without reference to legal title for much of the 18th century. As far as is known, only two grants on the left bank of the Rio Grande in what is now northern Webb County were made before the founding of Palafox (halfway between Laredo and San Juan Bautista Presidio) in 1810. In the 1810s, a handful of grants were made surrounding the new town, established as part of an effort to more fully settle the frontier, but only three have survived. For the most part, the region between the Rio Grande and the Medina River remained vacant until the 1830s.

Matters were similar in the El Paso region, which until the Mexican War belonged to New Mexico/Chihuahua. Grants to the towns in the Rio Grande Valley downstream from El Paso rested upon titles supposedly issued by the king of Spain in the mid-18th century. An original grant to Fray Joaquín de Hinojosa in 1692 covered the entire region but was vague as to its purpose. Until Mexican independence, farming and ranching took place within the bounds of the town tracts, approximately four leagues (18,000 acres) each. Land use to the north of these tracts was informal and, apparently, communal. Interestingly, although Ysleta, Socorro, and Senecú claimed lands under an unlocated Royal decree of 1751, there is no evidence at all of a grant to the town of El Paso del Norte, present-day Ciudad Juárez. It was only in 1820 that a legal matter came up in the area that led to the discovery of this fact. Throughout the Spanish colonial period, then, the western Rio Grande settlements developed without much thought to the legal character of their lands, and no thought was given at all to claiming the lands that today constitute northwestern Texas and the Panhandle.

In the lower Rio Grande valley, mat- ters were considerably different. José de Escandón’s colonizing efforts brought large numbers of settlers into a region of sparse water supplies and marginal lands. Large-scale farming in this area was limited by the difficulty of establishing gravity flow irrigation works on the Rio Grande. However, ranching, largely dependent on the river as a stable water supply, the need for common defense against Indian hostilities and the relatively large colonizing population combined to create greater pressures for secure titles. The granting of porciones, long narrow tracts of land encompassing from 5,000 to 12,000 acres, assured the valley settlers of access to river water on an equal basis. In all, some 200 porciones were surveyed in 1767.

Land occupation followed a natural and logical, if slow, pattern in the Valley. Between the distribution of porciones and the end of the 18th century, only eight grants were made north of the Rio Grande, all to the east of the established settlements except that of José Vázquez Borrego. These grants were huge — the smallest being more than 53,000 acres and the largest over 600,000 — both because there was limited competition for lands away from the river during the early years, and because the quality of the land was poor.

In the first decade of the nineteenth century Crown officials made another twenty grants, including land in all the counties later to form the triangle between Corpus Christi Bay, Laredo and Brownsville. These later grants, made after the introduction of limits on the amount of land one individual could obtain, were typically 17,000 to 18,000 acres in size, the two largest grants (101,000 and 78,000 acres, respectively) being made to families and not individuals. Yet here, too, the outbreak of the Mexican War of Independence brought a halt to territorial expansion and the granting of titles.

Mexico’s independence carried radical changes to Texas’ development. As Anglo Americans and Mexicans from the interior began arriving in Texas in large numbers after 1821, governments national and local took steps to properly organize the land system, which retained elements of Spanish law and continued to rely on local record- keeping and generous amounts of acreage. The steady rise in land values brought on by increased competition for good land led the old families to seek validation of land occupied for half a century or more. Beginning in the mid-1820s, many Tejano families cleared titles to land previously held extralegally.

It was also during this time period that the mission system disappeared and with them the only community land grants that existed in the province. At final secularization — 1793 for San Antonio de Valero, the 1820s for the other Texas missions — the farmland was parceled out to individual mission families, both Indian and Spanish, and the extensive ranches reverted to the public domain. A number of local families took advantage of the situation to add to their own holdings, as did land speculators from Coahuila. Impresarios in the Refugio, Goliad and Victoria areas also incorporated mission ranch lands into their enterprises.

Because of the decentralized distribution system adapted from colonial law, land records were maintained in over 11 different archives in Texas alone. San Felipe de Austin, Stephen F. Austin’s headquarters, housed the records for all five of his impresario contracts as well as individual grants made within the contracts’ boundaries.

Nacogdoches was the site of a local land archive as well as headquarters for the Burnet, Vehlein and Zavala colonies, and for special commissioners Charles Taylor, George W. Smyth, José Antonio Padilla and Juan Francisco Madero. The ephemeral town of Viesca was the site of Sterling Robertson’s land office. Green DeWitt was headquartered at Gonzales and Martín de León at Victoria, both towns founded by the impresarios. San Antonio and Goliad maintained local records, the latter’s ultimately winding up at San Antonio after the war. Power and Hewetson petitioned for and received the secularized mission of Nuestra Señora del Refugio as their headquarters, site of the present town of Refugio. And San Patricio was founded by the Irish impresarios McMullen and McGloin, as the principal town of their colony.

In the Trans-Nueces, Mexican independence brought renewed interest in land grants. The empty spaces left between the old Spanish grants were quickly swallowed up in new grants that Tamaulipan authorities continued to make until the time of the Mexican War. Tamaulipas land law — based on that of Coahuila y Tejas — also called for impresario development; however, the quality of available land mitigated against any impresario enterprise. The sorting out of land rights in the region, the records of which remained in the possession of Mexican authorities south of the Rio Grande, would remain the sources of lawsuits until the end of the 20th century.

The story of how the Republic and State of Texas dealt with its Hispanic land legacy is beyond the scope of this overview. Despite the dramatic transformation of the landscape, both in its use and ownership, that transpired after 1836, much remains to remind us of that earlier history in the place names, the terminology and the customs of Texas’ rural culture. Indeed, we don’t need to go any further than the word “ranch” to remind us of how much Texas owes to its Spanish Mexican history.

Jesús F. (Frank) de la Teja, who began his immersion in Texas’ past as a researcher for novelist James Michener while a graduate student at the University of Texas, retired in 2017 as professor of history and director of the Center for the Study of the Southwest at Texas State University-San Marcos. Since 2018 he has served as CEO of the Texas State Historical Association. This article is adapted from the author’s earlier essay on the subject.