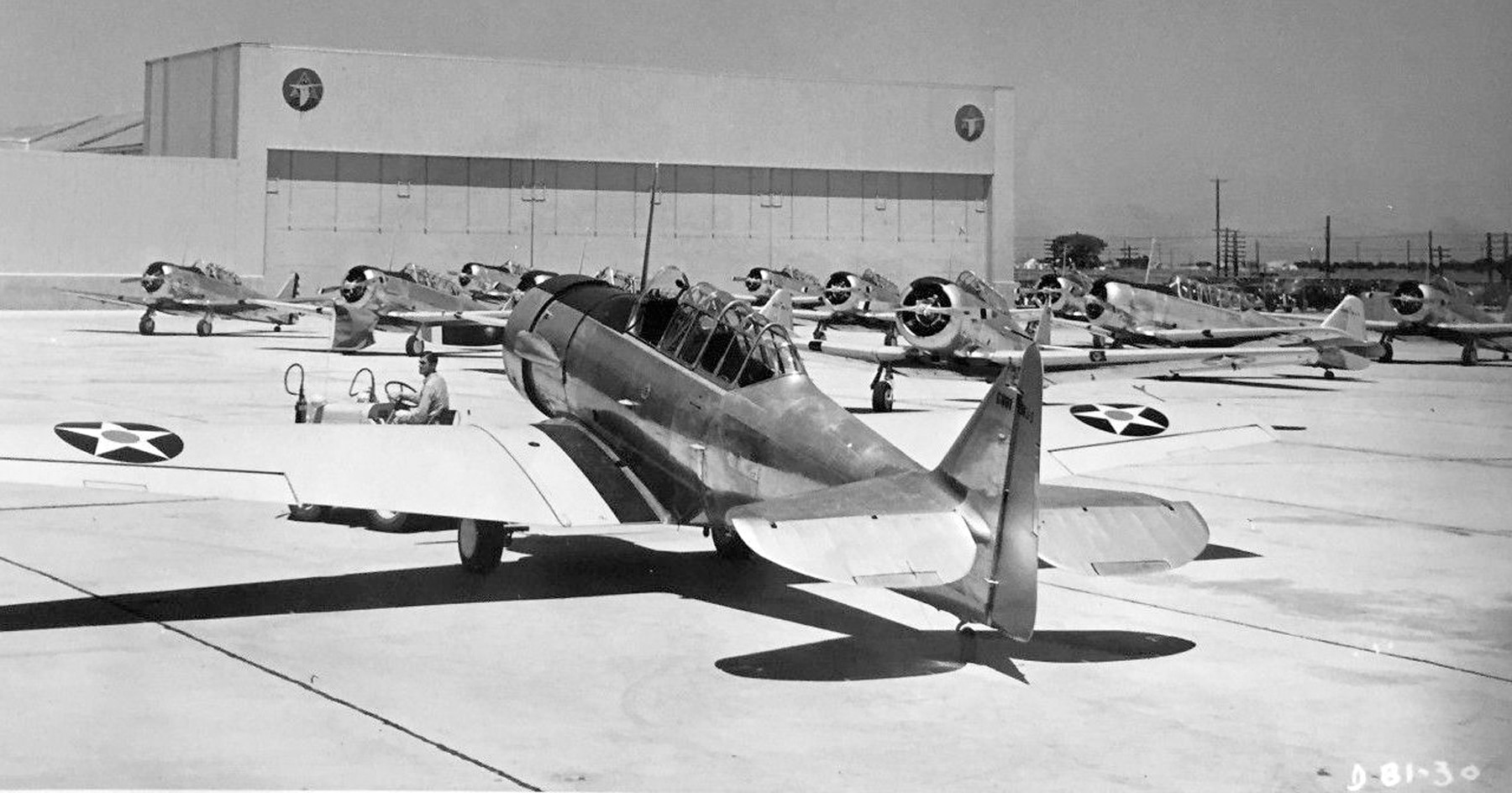 Blazing The High Trail Over Texas

The Texan. Say that brief name to any aircraft historian, and they’ll know immediately what you mean: the North American Advanced Trainer Number Six. According to Larry Davis, the aircraft’s premier historian and author of T-6 Texan in Action: “It is a rare airshow in the United States that does not have at least one T-6 on display.”

More AT-6 (Advanced Trainer) Texans were built than any other trainer aircraft during World War II—nearly 13,000 of them just in the Lone Star State, at North American Aviation’s “Dallas Plant” located in Grand Prairie, Texas, between March 1941 and August 1945. That’s 83% of all T-6 planes and their variants ever manufactured.

Sure, the nickname was a natural on account of the plane’s primary manufacturing location. But it was also closely tied to two key Texans, a businessman and an aircraft engineer, who together brought production to their adopted state and created a military aviation legend.

JESSE HOLMAN JONES was born in Tennessee in 1874 into a farming and lumber family. His mother died when he was six and his father, William Jones, moved him, his siblings, and his aunt in 1883 to Dallas, a city that had just secured telephone and electrical service. In Texas, William helped his brother Martin Tilton Jones run the M. T. Jones Lumber Company in nearby Terrell.

Jesse was enrolled at the age of ten in Dallas public schools. He didn’t stay long, but eventually returned to Dallas as a young adult and took a job with the M. T. Jones lumberyard at Main and St. Paul streets. He worked his way up to being the general manager of the company by 1898, when his uncle died, leaving him in charge of his entire estate.

With such extensive capital, Jones found opportunity to expand into sawmills and factories in Houston and Orange. Further acquisitions broadened his empire through much of the Southwest, and in 1906 he turned his business interests toward construction and real estate development.

Jones drove many of the largest construction projects in Houston during this period and also brokered major real estate developments in Dallas and Fort Worth. Expanding into the banking and newspaper industries, he became sole owner and publisher of the Houston Chronicle in 1926.

In a growing civic role, Jones became more actively involved in state and national politics and was responsible for bringing the 1928 Democratic National Convention to Houston, the first national party convention by either party to be held in the South since the Civil War. His prominence in the Democratic party paved the way for his eventual appointment as U.S. Secretary of Commerce, at a crucial juncture in the nation’s history.

IN 1932 PRESIDENT HERBERT HOOVER had created the Reconstruction Finance Corporation (RFC), a new government agency to combat the Great Depression. On the recommendation of the U.S. Speaker of the House, John Nance Garner of Texas, President Hoover appointed to its board Houston real estate developer Jesse Holman Jones.

A year later, new president Franklin D. Roosevelt appointed Jones chairman of this influential agency, a position he held until his elevation to Secretary of Commerce in 1940. A subsidiary of the RFC, the Defense Plant Corporation (DPC), also known as Plancor, founded in August of that year, provided the necessary funding for plant expansions— and most important for Texas, selected sites for construction.

It was not just luck or coincidence that the Dallas-based North American Aviation was awarded clearance and funding for the Plancor-25 aviation manufacturing facility.

JOHN LELAND “LEE” ATWOOD, born in 1904, had moved to Texas from Kentucky as a young boy when his father, the Reverend Dr. Elmer Bugg Atwood, a Baptist preacher, took a job in Yoakum, Texas, between San Antonio and Houston.

Dr. Atwood moved his family from pulpit to pulpit in Texas and New Mexico before accepting the presidency of Wayland Baptist College in Plainview in 1918. Lee began his college education there but completed his degree at Hardin-Simmons University in Abilene, where Dr. Atwood had gone to teach in 1924.

“I tried to specialize in physics and mathematics,” recalled Lee Atwood in a 1989 oral history recording for the National Air and Space Museum. “I was able fortunately to learn something more useful when I went to the University of Texas at Austin and studied engineering.”

Graduating from UT in 1928, Atwood sat for the civil service examination, hoping to find a construction job in Texas. But his excellent test scores caught the attention of the personnel director at the Army Air Corps Materiel Center in Dayton, Ohio, who immediate- ly offered him a job as an aeronautical engineer in that pioneering aviation city. “I accepted the job at Wright Field,” said Atwood, “having just been married, and I fortunately had a small car, which I drove back to Dayton, and went to work.”

There, Atwood stood out among his peers. He quickly learned the most current advancements in aircraft engineering and manufacturing. His team’s primary job was to evaluate the technical performance of contractors in the airplane industry. Taking his chances in a burgeoning industry, Atwood left the Dayton job for posts in Kansas and California that failed back-to-back.

But just when the Depression changed the fortunes of so many Americans for the worse, Lee Atwood’s luck was about to pull out of a nosedive. One of his industry friends, Fred Herman, got him on as a draftsman designer at Douglas Aircraft in Santa Monica in early 1930. Soon his good work caught the attention of chief engineer James H. “Dutch” Kindleberger.

When Kindleberger left Douglas in 1934 for the presidency of Los Angeles– based North American Aviation, he brought along Atwood as chief engineer. It was “a big promotion for me,” wrote Atwood, “although North American wasn’t very much at the time. It was sort of the remnants of several organizations. It did have some money.”

With Kindleberger as president and Atwood as chief engineer, North American started to compete for military contracts. “We wanted to become a viable engineering and manufacturing company. And the only way we could see to do it was getting the Army and Navy work. The trainer business was the first thing we found we could handle.”

“The first plane was the Basic Trainer Nine. It became, after a series of evolutions and increased power, the AT-6 eventually. We opened the planes up so they were easier to work on. Our assembly time was much much lower than our competitors.” With an innovative construction technique that involved making structures in halves, adding mechanical systems, and then closing them up like a clamshell, North American came in 20% below industry average in labor costs.

IN 1939 CONSOLIDATED AIRCRAFT Corporation, the primary builder of B-24 Liberators, had been looking to expand its operations from California to a central state. The firm was being courted heavily by both Dallas and Fort Worth.

Dallas, with lobbying from Mayor Woodall Rogers, proposed a property to Consolidated just southwest of the city, near Mountain Creek Lake in Grand Prairie, as having great potential for its aircraft factory. But Consolidated lacked funding, and when it had to back out, another firm stood in the wings: North American Aviation, whose vice president and chief engineer had been raised and educated in Texas.

With Atwood’s business connections in Texas and Kindleberger’s influence in Washington, the only thing standing in the way of the new factory was a decision from the Defense Plant Corporation. That decision lay with RFC chair Jesse Holman Jones, who was just weeks away from becoming Secretary of Commerce.

On August 23, 1940, North American Aviation signed the contracts to build Plancor-25 adjacent to Hensley Field in Grand Prairie. As one of the largest construction projects of the entire war, the factory broke ground on September 28 and by March 30, 1941, the first AT-6 Texan rolled off the assembly line at the new factory.

North American took out an ad in Life Magazine that year to tout its ramp-up as “The Dallas Story: From Plain to Planes in 120 Days.” Squadrons soar overhead as a cattle-driving cowboy on horseback reins in his mount in amazement.

The Dallas factory grew to be the most productive in the nation during World War II, producing a total of 18,784 planes. The factory became the region’s largest single employer, with over 32,000 employees.

THE T-6 BECAME THE WORKHORSE of combat aviation training. During the war, pilots would start out in a primary trainer such as a Boeing PT-17 Stearman at 220 horsepower, then move on to a basic trainer like the BT-13 at 450 horsepower. The final phase of pilot training would be at least 75 hours in the AT-6 with 600 horsepower and retractable landing gear. This training turned out to be a key strategic advantage for the U.S. in winning the air war.

Immediately upon Japan’s surrender in 1945, the Dallas plant was shut down and the workers dismissed. They had done their part to help win the war. Their experience and newly acquired skills, however, would fuel the economic vitality of Dallas for decades to come.

The T-6 Texan help set its namesake state on a track to become one of the world’s biggest economies.

It’s still soaring over Dallas skies, too. Restored T-6es, including fully maintained airworthy craft, can be found in aviation museums around the state and seen in airshows. A little north of its home base, at the Cavanaugh Flight Museum in Addison, civilian visitors may experience the T-6 for themselves, taking a ride in this wartime legend.