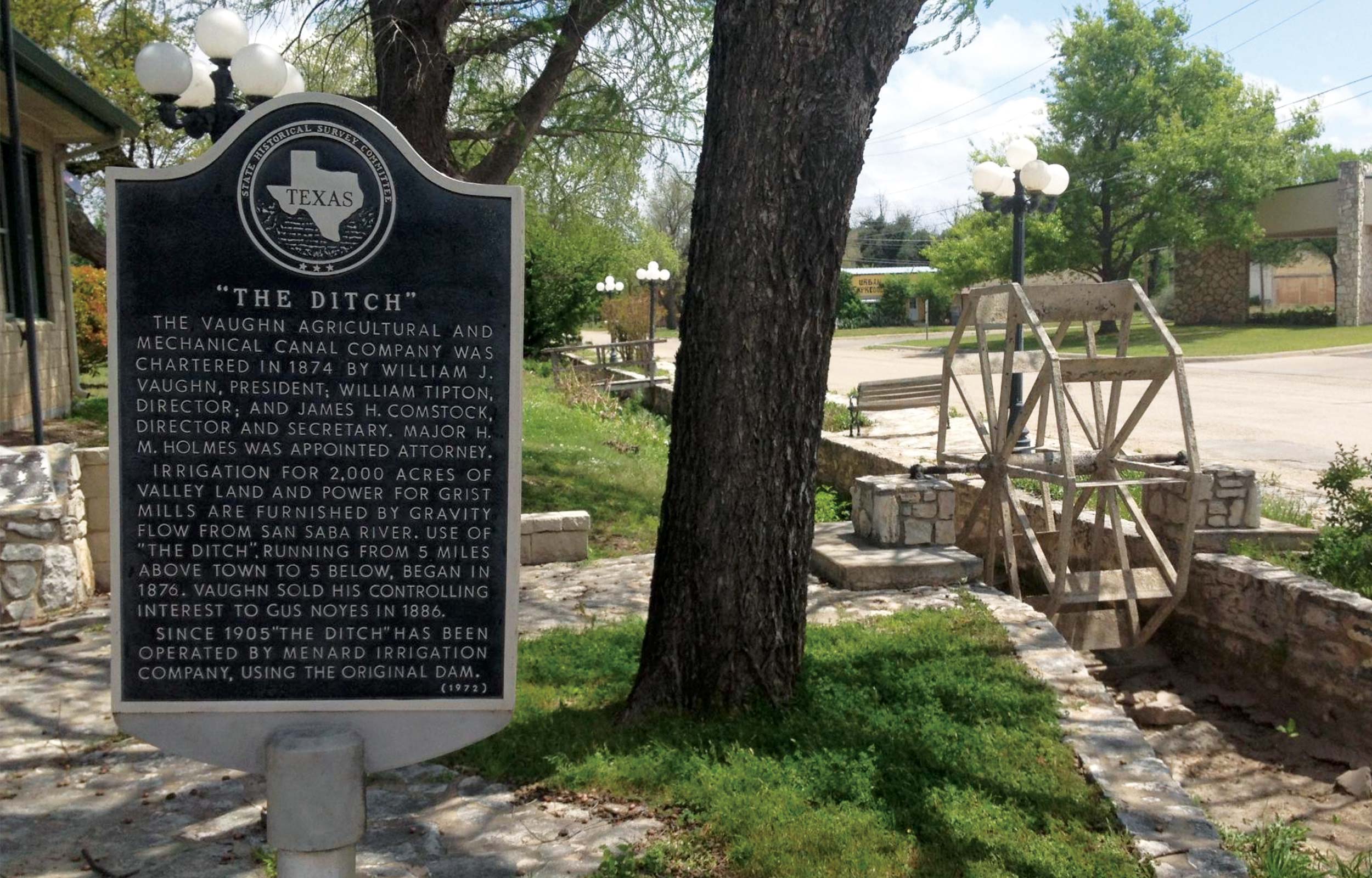 Texans One and All

However, it may be the clear, cool water flowing above and below ground that’s always been the most precious resource. Spanish missions, cavalry forts, and early homesteaders all were dependent on a viable water source—as people are today.

The small settlement of Menard traces its beginnings to an irrigation system that eventually provided water for farming the San Saba River valley. Segments of this system now are more than 260 years old.

The fascinating history of the canal begins with the Spanish settlement in 1757, when missionaries came from South Texas to Christianize the Indians and prospectors arrived to search for gold and silver.

Today’s modern canal dates more than a century later, to 1874, and various portions have been expanded over time. Many historians have utilized historic survey maps to verify that part of the main canal follows the abandoned Spanish acequia or irrigation canal.

Former Menard newspaper editor N. H. Pierce stated in his book The Free State of Menard that the original functions of the acequia were to help transport rock for the building of the presidio and for irrigation and farming purposes.

Originally the canal was 15 miles long, beginning above the town and extending a dozen or so miles below it. At one time, two or three gristmills and a cotton gin operated in the valley.

Among the first residents to harness the river’s waters was William Vaughan, who established the Menard Irrigation Company. His surveyor, however, was not reliable, and irrigation flow proved ineffective.

Other engineers envisioned various possibilities for the irrigation company, which was reformed by Gus Noyes in the late 1880s. Noyes purchased controlling shares from the Vaughan family and hired workers with picks and crowbars to dig the canal deeper and make slight changes to the course. These hired hands often lived in shabby tent camps—one was known as Sunnydale, a misnomer for sure.

Noyes reportedly profited $20,000 per year from his ventures, which grew to 2,000 irrigated acres producing cotton, corn, oats, potatoes, and melons.
Old-timers have related that when patrons got too rowdy at the local saloons, the town marshal would dunk the drunks in the ditch to sober them up.

Recent droughts and seepage within the canal have dried up the water flow, however. Menard citizens commemorated 250 years of agricultural history in 2007 and continue to promote the Ditch Walk as a tourist attraction. The portion of the canal that runs through town is locally known as the “Ditch.”

Several unique sites line the Ditch as it meanders through town and welcomes visitors to take a walk back in time. Among the favorites are the water wheel, the 120-year-old Sacred Heart Church, First Christian Church, the 1903 Bevans Bank, the Mission Theatre, Pioneer Rest Cemetery, and the Menardville Museum, located in the Santa Fe Depot near the intersection of U.S. Highway 190.

Dee is a semi-retired journalist residing in San Angelo with her husband, Jerry. She has enjoyed communication careers at West Texas Rehabilitation Center, Angelo State University and San Angelo Standard-Times.