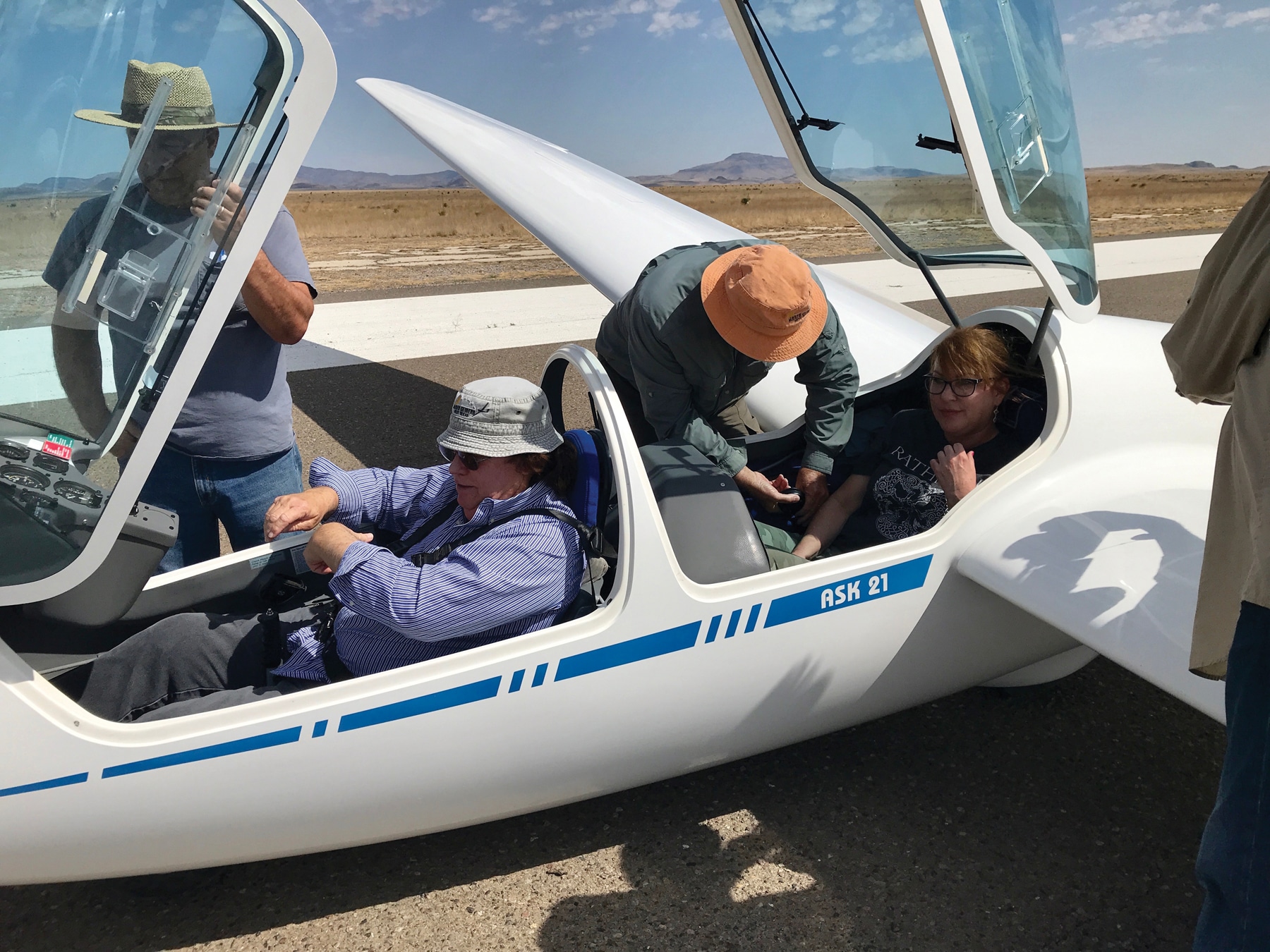 Floating on thermal waves above the Chihuahuan Desert of Southwest Texas, the lucky passenger in the sleek, well-designed glider craft is afforded views that encompass the Davis Mountains to the north and west, the Chinati Mountains on the south, and all around and in between the southern Trans-Pecos.

From over 2,000 feet above the ground, the desert becomes a floor of prairie grass, catclaw, and volcanic outcroppings merging into jutting mountains and peaks. The vast plain is spotted with antelope, cattle, and the occasional windmill. The infinite sky, a palate of blues and wisps of white clouds, harbors some of the best thermals a sailplane pilot could dream of. It’s the thermals above the Marfa Plateau that beckon sailplane pilots from around the world to launch their craft into the skies over the Big Bend region of West Texas.

And it’s Burt Compton of Marfa Gliders who orients them to the wild country, trains new pilots and coaches rusty ones, and provides glider rides by appointment.

When it comes to the challenge of gliding Far West Texas, Compton doesn’t mince his words. “Realistically,” he explains on his website, “Marfa in West Texas is not an ideal site to ‘learn’ cross-country soaring. Lack of proficiency in accuracy landings, crosswind takeoffs and landings, aerotow in strong lift (and sink), takeoff and landing in gusty air and poor ‘blue’ thermal soaring technique might be challenging for first-time pilots at Marfa, especially in our strongest soaring months of April through October.”

But Marfa occupies a unique niche in American and Texas aviation history. Originally a railroad town and ranching community, Marfa was chosen to be a training base for Army Airforce pilots during World War II. Fort D. A. Russell served as the headquarters and base for the army during the early 1940s. After the war, Marfa, and the base, became a P.O.W. camp for Germans who were either captured, or surrendered at the close of the conflict.

By 1960, the Marfa Plateau or “dry line” gained a reputation with sailplane enthusiasts from around the world, and soaring camps were held at the old training base located seven miles east of Marfa on U.S. Highway 90. Conditions were ripe for record-setting glider flights, and in 1967, the old airfield became the hosts for the first sailplane competition to be held in Texas. In 1970, Marfa hosted the only World Soaring Championship to be held in the Untied States.

Enter Burt Compton. Raised in an aviation family on their gliderport near Miami, Florida, he soloed in gliders in 1968 and is as FAA “Gold Seal” certified flight instructor in gliders and airplanes. A life member of the Soaring Society of America, a trustee of the Soaring Safety Foundation, and a producer of several glider pilot training videos. These days he’s an FAA Designated Pilot Examiner for the Lubbock FAA District Office, which includes much of West Texas, including Marfa and Hobbs, New Mexico. And he’s CEO of Marfa Gliders, by now an institution in his adopted hometown.

Compton makes his safety conditions crystal-clear on his website. “Want a concentrated course to finish your glider rating? Sorry, no ‘crash’ courses, but I do offer quality training to meet your goals. Come to West Texas and enjoy our excellent weather (not warm up here at our 5,000’ msl airport elevation) and the wonderful scenery of the Texas Big Bend country and the Davis Mountains.”

According to the National Soaring Museum (www.soaringmuseum.org), Marfa is ground zero for some of the best thermal drafts and record setting soaring conditions in North America. Since 1960, sailplane pilots have utilized convective thermal updrafts, the “Marfa Dry Line” and wave lift for record setting soaring flights, four US National Soaring Contests (1967, 1969, 1991, 2006) and the first World Soaring Championships (1970) flown in the United States,” reads the marker for Marfa.

Gliders and gliding competitions have a more recent history as well. In the beginning, gliders were more of a way to “hop” across the terrain. Launched from hills or towed by ground vehicles, the primitive design would become airborne for short amounts of time. The goal then, and now, is to stay aloft for as long as possible. In 1929, the first record was just a bit over nine minutes. Nowadays, pilots can stay airborne for hours.

The materials used to manufacture the aircraft included fabric, steel, and wood; today, they are much more effi- cient, utilizing carbon fiber, Kevlar, and fiberglass.

On April 5, 2008, a national land- mark was dedicated at the Marfa Municipal Airport, honoring the efforts of the men and women who made soaring records possible. The National Soaring Museum recently celebrated fifty years of recording the history of gliders and sailplanes.

Compton provides pages of practical advice for newcomers and pilots alike. “Obtain a current El Paso aeronautical (sectional) chart to understand our topography,” he writes, “and to see the distant airports. Most remote ranch runways are too narrow for gliders or they are fenced and locked.”

If you opt for a ride with Compton, he’s generous with advice on local places to stay and other sites to see. His aircraft, like all those used in competitions around the U.S., are FAA certified.

The National Soaring Museum mark- er may be viewed at the Marfa Municipal Airport, located three miles north of Marfa on State Highway 17.

“I never get tired of going up,” Compton told the Austin Chronicle in 2008. “I’ve got the best job in the world. What could be better than having your office 2,000 feet above the ground?”