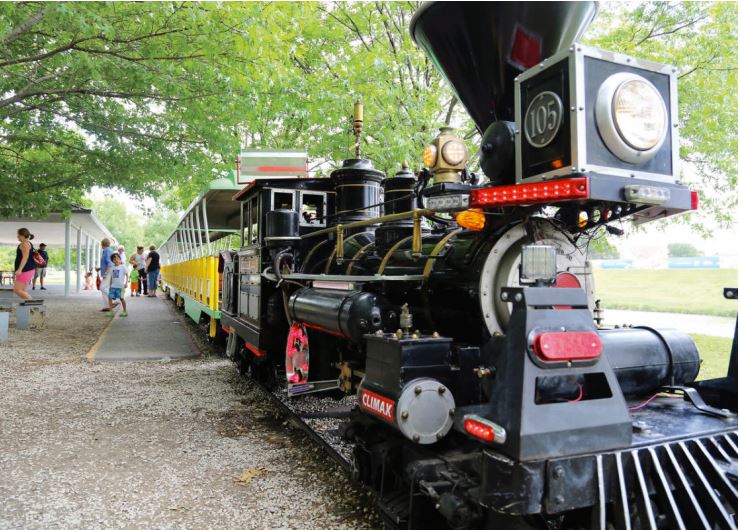 When Forest Park’s miniature railroad first opened in 1959, the new attraction drew so many visitors it actually caused a traffic jam in the park. More than 5,000 people showed up to ride the train in its first two days.

One of Fort Worth’s most cherished family experiences, the Forest Park Miniature Railroad is a generational treasure.

“Some people have been coming for years, and some people are now bringing their grandchildren,” David Ledel told the Fort Worth Star-Telegram for the train’s 50th anniversary celebration in 2009. The great-grandson of the railroad’s founder, Bill Hames, Ledel and six other family members own the train.

After opening, the train briefly held the record for longest miniature train route in the world, though the attraction’s popularity caught on and soon cities across the globe had their own miniature trains.

While the Forest Park train has had some changes over time — including a new bridge in response to flood control and upgrades to the cars — it remains a timeless experience for visitors of all ages.

The centerpiece of Austin’s civic love affair with the outdoors for more than 100 years, Zilker Park houses the Barton Springs Pool, Zilker Botanical Gardens, miles of hike and bike trails, and plenty more amid its 350 acres. And what better way to see it than by riding the Zilker Zephyr, a miniature train departing from the heart of the park?

At three miles of track, riders can expect about a 25-minute ride traveling at a leisurely eight miles per hour. With plenty of track along Lady Bird Lake, it’s also the perfect train ride to spot all the developments to the Austin skyline, thanks to the train’s central urban location. Formerly known as the Eagle, the Zephyr is actually privately owned and has a history dating back to the 1960s.

Once known as the Brackenridge Eagle, the San Antonio Zoo Eagle train is a replica of a classic 1863 model. Nowadays it’s known as a charming ride along the San Antonio River winding through Brackenridge Park, but it actually owns another piece of Texas history. In 1970, two masked men popped out of the bushes along the route, brandished a pistol and demanded the belongings of 75 riders.

The ordeal became known as “The Great Little Train Robbery” and was the first train robbery in the Wild West in 47 years (authorities later found the culprits — two soldiers stationed at nearby Fort Sam Houston). But now, nearly 50 years in the past, the harrowing ordeal is an interesting piece of San Antonio Zoo Eagle lore.

The relaxing train ride remains a focal point for millions of Zoo visitors every year.