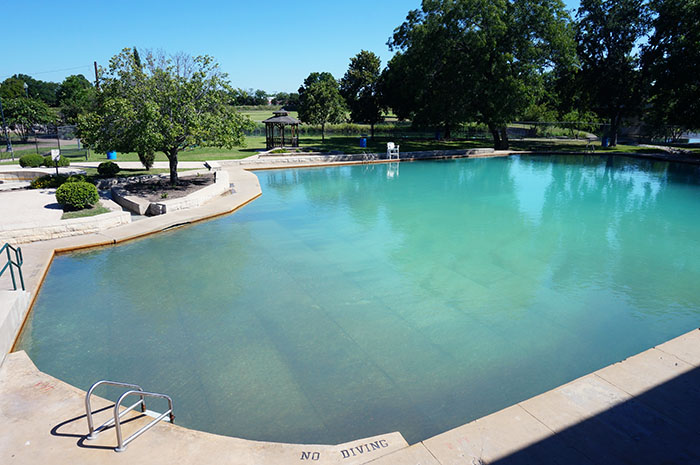 From Baptist encampment to resort to army property to city pool, few recreational spots in Texas have undergone as many resurrections as the Hancock Springs Pool in Lampasas. Today, visitors can appreciate all these aspects of the pool’s past while also enjoying a dip in its sparkling, invigorating spring waters.

The town of Lampasas, about an hour northwest of Austin, developed around the Hancock Springs in the 1850s. By the 1880s, a health resort had opened at Hancock Springs to take advantage of the springs’ salutary effects. Situated just a halfmile from the historic downtown (with a courthouse that is restored today and listed in the National Register of Historic Places), the springs quickly became a favorite destination for locals and travelers.

In 1911, the spring was excavated to form a large swimming pool. The First Baptist Church of Lampasas, which had helped establish the local Baptist Association a few years earlier, founded the Lampasas Baptist Encampment and leased the springfed pool. Bathers were provided soap, towels and a dressing room — at a cost of 15 cents per bath. Men and women had designated bathing times. The pool was also used for baptisms.

A two-story Hostess House, which housed dressing rooms for the pool and a dining hall, was added to the encampment in 1917. The folks at the encampment weren’t the only ones making the most of the Hancock Springs Pool and Park. The students at Camp Marlamont, sponsored by the San Marcos Baptist Academy, took part in outdoor athletics, including swimming, baseball, croquet and tennis.

Although Hancock Park’s Baptist encampment era came to an end in July 1928, the property was sold to Baker and Little Swimming Club. By 1933, according to the Lampasas Dispatch Record, Hancock Springs was known as the “Best Bathing Resort in West Texas.”

In 1936 the city purchased the property, and it was leased to Camp Hood (later Fort Hood) from 1942 to 1946. The Panther Recreation Park, as the property was known while under federal lease, was a perfect place for soldiers to convalesce and enjoy R&R in the cabins that remained from Baptist Encampment days.

After the war was over, Hancock Springs was again available for visitors. The city enhanced the park with a playground, nine-hole golf course and other facilities.

The park and the pool, which celebrated its 100th birthday in 2011, still draw locals and visitors alike. The pool remains an inviting place to dive into on a hot summer day — to the tune of 300,000 gallons of springfed water that stays a cool 69 degrees.

The park’s picturesque landscape makes it easy to imagine what this spot was like for the thousands who’ve sought refuge from the heat and the healing qualities of the water for over 100 years.