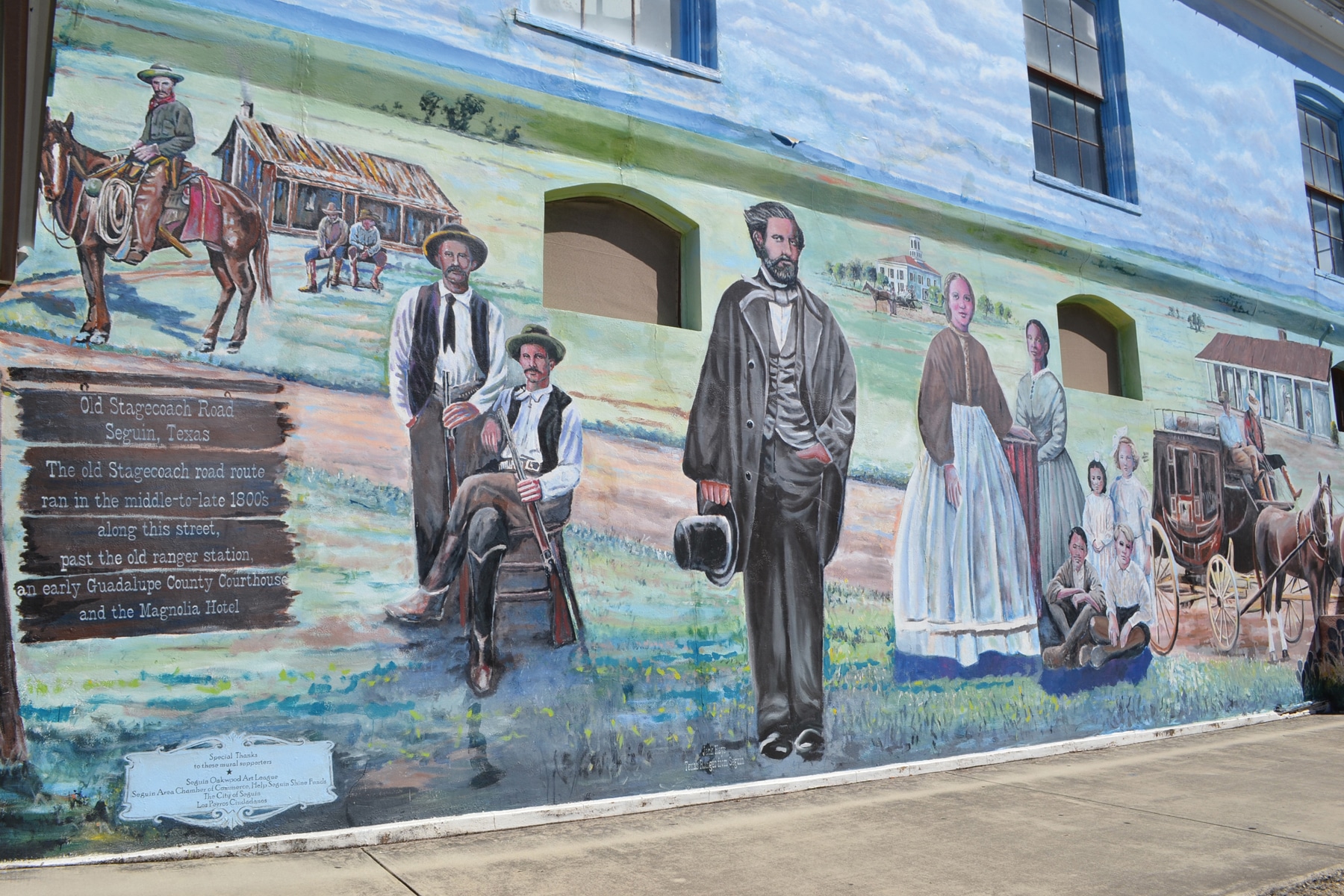 The Old Stagecoach Road Mural, painted by artist by Brent McCarthy, depicts the early pioneers and landmarks along the 1800’s route. | Photos by Jennifer Sourdellia
0 Shares
0

One Patient at a Time, One Painting at a Time

N ostalgia remains alive and well in Seguin, Texas, 181-year-old seat of Guadalupe County. Visitors to this charming South-Central Texas community will discover a place deeply rooted in history, with unique treasures and stories of the past left behind by the immigrants who once called Seguin home.

Though Guadalupe County once saw the arrival of people from Mexico, Russia, Poland, England, Wales, Ireland, France, Austria, and Switzerland, Seguin’s cultural identity was largely shaped by the dominance of German American pioneers. These settlers traveled along the German Immigrant Trail in the 1840s and 1850s from Indianola, on the coast, to Seguin and the Hill Country in New Braunfels. By the 1880s, over 40 percent of Seguin’s population was of German descent. A historical marker dedicated to the early German pioneers can be found in Seguin’s downtown Central Park on the Square. Today, many German descendants remain in the area.

A few blocks away from the park is the Seguin–Guadalupe County Heritage Museum, where an extensive collection of artifacts, relics, and photographs documenting the area’s history can be explored. Longtime museum director John Gesick is a wealth of knowledge and enjoys sharing Seguin’s story to those desiring to take a journey into the community’s past.

Under the stewardship of the Seguin Conservation Society is one of Seguin’s most notable points of interest is the historic Campbell Log Cabin founded by an immigrant from a different country. The one-room cabin was built in 1850 by Joseph Campbell, who came to Seguin from Ireland. A year later, Campbell returned to his native land, convincing twenty-three family members to come back with him to Texas. Working together, the family expanded the cabin to include a kitchen, a second room with a fireplace, front and back porches, and a dog run. Up until 1952, Campbell family descendants lived a simple life in the cabin without the modern conveniences of electricity or running water.

Family members continued to occupy the cabin until 1957. In 1979, the cabin was moved from southwest Seguin to its present location at the city’s Heritage Village, where today it provides visitors a glimpse into the lives of early residents.

Two other fascinating gems, the Dietz Doll House and Los Nogales Museum, are today located across the street from the Campbell Cabin.

The dollhouse was built in 1910 by Louis Dietz, a German immigrant carpenter, for his five-year-old adopted daughter, Alice, who was herself an immigrant to the city — arriving on an orphan train. A variety of vintage dolls and toys, in addition to a wardrobe and dresser crafted by Dietz, are displayed in the elaborate Victorian-style doll house.

Dating back to 1849, Los Nogales is one of the oldest structures in Seguin. Within the walls of the 16-by-18-foot building is a treasure trove of Seguin’s oldest artifacts. The one-room adobe structure built for German immigrant Justus Gombert is the last remaining adobe-construction home in Seguin.

No historic tour of Seguin would be complete without a selfie in front of the Old Stagecoach Road mural located on Donegan Street in the heart of downtown. The painting represents the cultural diversity that makes Seguin what it is today, while celebrating the heritage and legacy of yesterday.