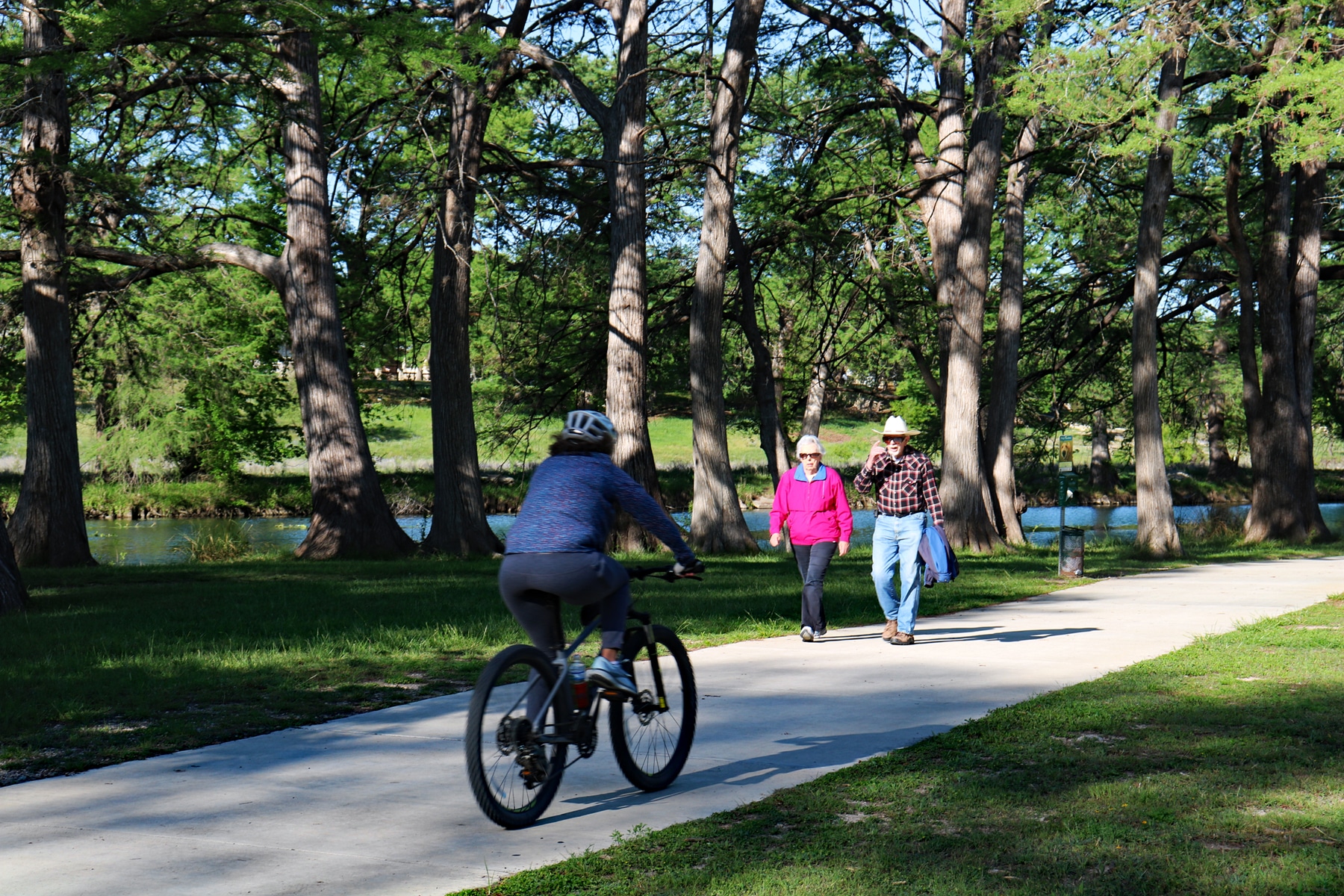 Like a green artery running through the heart of Kerrville, the Guadalupe River has pumped vitality into the historic Hill Country community and attracted countless numbers of people to its cypress-lined banks.

Long ago the river lured Native-Americans and Spanish explorers, then came cypress-shingle makers like Joshua Brown who’s credited with the founding of Kerrville in 1846. The river’s pull began to intensify in 2012 with the opening of the first section of the River Trail, a 10-foot-wide pathway that parallels the south bank of the serene stream. Today, that slender ribbon of concrete entices walkers, joggers, bicyclists, fishermen, picnickers, parents pushing strollers and pets on leashes with their owners in tow, to name some of the many seeking fresh air, exercise, solitude or connections with nature.

“The River Trail now extends from Kerrville-Schreiner Park on the east to the Dietert Center for senior citizens on the west,” says Ashlea Boyle, Kerrville director of parks and recreation. “It’s open dawn to dusk for a long list of activities except skateboarding and riding motorized vehicles, although motorized wheelchairs are allowed. A new, mile-long segment off the main trail to Schreiner University was recently completed.  That addition increases the length of the entire River Trail to approximately 6 miles.”

The Schreiner addition serves as a good example of Kerrville’s desire to continue adding segments to the trail. The Kerrville River Trail Master Plan calls for a downtown extension feasibility study, plus the possibility of additional linkages in the future.

“We’ve definitely noticed an increase in River Trail usage, especially since the COVID-19 pandemic,” Boyle says. “We recognize that physical distancing may take a toll on mental health. Our parks like the River Trail provide a connection to the outdoors and green space as well as opportunities for physical activity, which reduce stress and improve mental health.”

Boyle also reports an uptick in attendance at Kerrville-Schreiner Park, eastern gateway to the River Trail and another “wonderful way to escape.”

“It’s a large, beautiful recreation and camping park on the Guadalupe River,” she says. “It’s home to an abundance of wildlife, and amenities include camping, cabins, trails, river access, a pollinator garden, a playground and access to the River Trail. Camping sites are well-spaced, and we have a lot of shade. It’s a great place to recreate and enjoy a vacation while easily social distancing.”

Speaking of amenities, the River Trail near Kerrville’s central business district offers delightful detours within short walking distances of the trail. These include the Riverside Nature Center, which features educational programs spotlighting plants, animals and ecology; the Kerr Arts and Cultural Center, a downtown gallery with changing artistic exhibits; Gibson’s Discount Center, an old-fashioned general store that’s popular with browsers and those who “can’t find it anywhere else;” and multiple restaurants along Water Street.

Fairly flat for its entire length, the River Trail offers both heavily-shaded portions as well as sunny stretches accentuated with seasonal wildflowers. It also can be likened to a necklace, stringing together four city parks – Kerrville-Schreiner on the east, Lowry on the west and Lehmann-Monroe and Louise Hays in the center.

Nine trailheads, with parking available at most of them, afford access to the trail. On the River Trail itself, visitors encounter stone and metal benches for taking breaks, trash and recycling receptacles, dog-waste baggies, picnic tables, shade structures, restrooms, water fountains and interpretative signs about the Guadalupe’s flora and fauna.

Kerrville community leaders started talking about a hug-the-river trail in the early 1970s, Boyle says, but construction on the $6-million project didn’t begin until decades later – in August 2011. In the early going, opponents claimed the trail would wash away in a flood, no one would frequent the trail, etc. Once the first phase opened in 2012, almost all opposition evaporated.

The River Trail is a peaceful pathway along a scenic and historic stream, in contrast to the constant motion on city streets above river level. The trail’s magnetism stems from its easy accessibility, natural beauty and variety of outdoor activities. Instead of questioning the River Trail’s worth, Kerrville area residents are now banking on it.