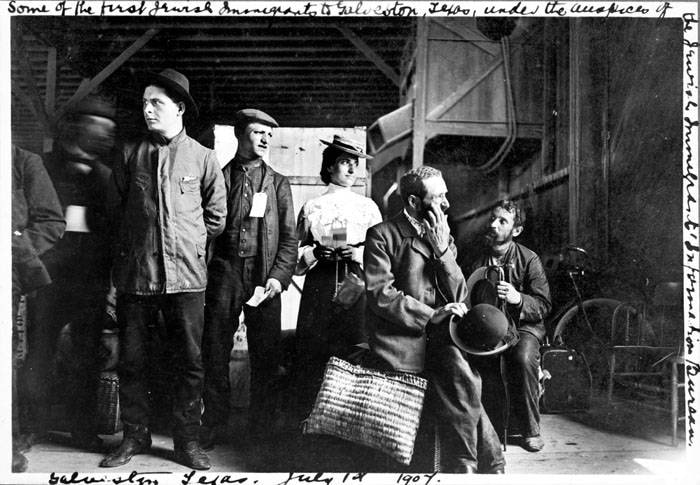 From Cotton Field to Love Field

T he draw of Texas—a mythic place of ample land and opportunity—is well known today. However, this was not always the case. State elected officials, along with leaders in agriculture, industry, and religious life, have a long history of promoting Texas to draw people to the state. Many records of this history are preserved in the State Archives.

Some of these records go all the way back to the era of Mexican colonization and the early days of Texas as a fledgling republic. One rich source of information about this early period is the collection of passports issued by the Republic of Texas Department of State.

Passports were issued to allow people to freely leave and re-enter. Passports of well-known figures from Texas history are present, including Sam Houston (issued 1839) and Emily West (issued 1837). West was a free African-American woman who was kidnapped by Gen. Santa Anna’s army on April 16, 1836, and forced to accompany the Mexican army to the Battle of San Jacinto. After the Mexican defeat, stories began to circulate that Emily helped the Texan cause by keeping the general occupied in his tent while the Texans attacked. Though the story has no basis in historical fact, it became a popular Texas myth, and Emily West eventually became known as “The Yellow Rose of Texas.” It is thought that she returned to her home in New York in 1837.

In the state archives’ collection of broadsides are many advertisements, including this one printed in 1871 with its explicit invitation to immigrants, a phrase that became well-known after the Civil War, “Go to Texas!” Broadsides are an extremely popular format for reproducing and disseminating news, announcements, official proclamations, political and entertainment events, and advertising throughout history. They often include very large typefaces and striking images, such as the famous phrase and map of the eastern United States seen in the image above. This broadside advertises land for sale in the town of Lawrence in Kaufman County.

By the late nineteenth century, Galveston had become a gateway for immigrants to Texas and the broader Southwest. While many people think of Ellis Island as being synonymous with this period in U.S. immigration history, tens of thousands came to the U.S. through the Port of Galveston. Between 1906 and 1914 alone, nearly 50,000 people arrived. Though these new Americans hailed from all across the globe, the largest group of immigrants were Russian and Eastern European Jews, in a migration known as the Galveston Movement. Directed by the Jewish Immigrants’ Information Bureau in Galveston and managed on the ground by Congregation B’nai Israel’s Rabbi Henry Cohen, this program sought to divert these immigrants from the East Coast—particularly New York City—to stem a rising tide of anti-Semitism. In all, ten thousand people came through the Galveston Movement, many of them staying in Texas and contributing to the state’s development and culture.

More evidence of how Texas has promoted itself as a welcome home for immigrants can be found in transcripts of speeches given by the leaders of civic organizations, such as the speech featured opposite, read by Col. William W. Lang, before the Farmer’s Club of the American Institute, Cooper Union, New York, on March 8, 1881. “A Paper on the Resources and Capabilities of Texas” promoted the advantages of the state for immigration. This copy includes maps of the Southwest, including counties, cities, railroads, and rivers.

The archive’s William Deming Hornaday photograph collection contains more than 5,800 visual records amassed by Hornaday to accompany the various articles he wrote between 1890 and 1940. These photographs depict people, places, and events across Texas, notably agriculture, cattle, cityscapes, dwellings, factories, harbors, military bases, the petroleum industry, public buildings, and railroads. As documented in this collection (above, undated), Japanese rice farmers helped develop the Texas rice industry. Though farmed as early as the 1850s, commercial rice production spread from Louisiana into Southeast Texas after the southern transcontinental railroad opened in 1883. In 1904 the Houston Chamber of Commerce and Southern Pacific Railroad invited experts from Japan to advise, and these farmers brought with them the first Japanese rice seed—a gift from the emperor. Japanese rice production then began in earnest in Harris County, on the Gulf coast, when Seito Saibara, his family and thirty Japanese immigrants established a commercial operation in Webster. Japanese men from prominent families began emigrating to Texas and bought land to start colonies built around rice farming, hiring young men in need of work to labor in the fields.

These and hundreds of other collections are open for research at the Texas State Library and Archives Commission, open Monday through Friday from 8:00 a.m. to 4:45 p.m. and the second Saturday of each month in downtown Austin.