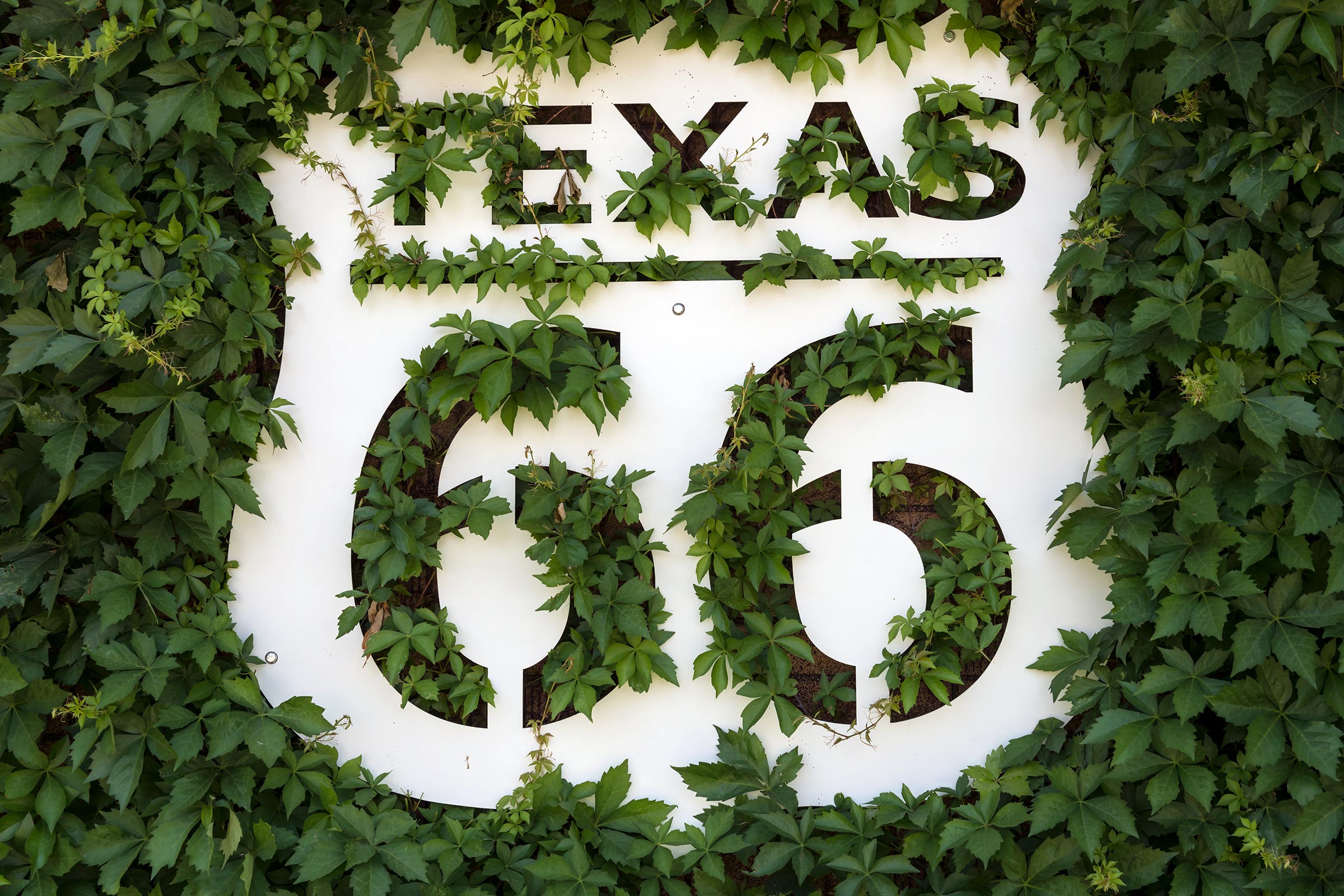 On a workaday Tuesday noon, this stretch of historic Route 66 on the west side of Amarillo, Texas, looks like your ordinary Anywhere USA. A few hungry diners trickle into MeMe’s Café.

Some seek a quiet booth in the back. Others joining the animated conversations in progress around the long table by the window, where Hawaiian shirts sport classic-car themes and a few Route 66 caps are in evidence.

There are some big names and outsized “roadie” personalities here. Eric Miller, a member of the Society of American Travel Writers, has worked on promoting Amarillo tourism for more than two decades. Penny Clark is proprietor of the new I Am Route 66 Art Gallery & Visitor Center down the street. Nick Gerlich, a West Texas A&M professor and a longtime chronicler of the Route and other roads, sits at the head of the table to preside over the meeting.

Everywhere, talk is about signs and road rallies and the latest new business to open up (MeMe’s itself is one of the newcomers).

Among the chatter and greetings, you could almost—almost—overlook the quiet smile and unassuming voice of one diminutive figure who’s traveled every mile of the Mother Road more than once, welcomed tens of thousands of visitors to the historic route over the years, and served as president of the Old Route 66 Association of Texas from 2011 to 2019.

Amarillo native Dora Meroney is the glue that holds this motley association together. As part owner of Texas Ivy Antiques, a landmark on this part of the route since 1997, she’s the unofficial hostess of the Amarillo Route 66 Historic District and a tireless promoter of the road, its history, its culture, and most of all its people.

It’s a role you could say she was born to.

Her father, Willis Carroll, brought his bride, Florence, to Amarillo in the mid-1950s and sold cars from his lot next to where the antiques store is today. Dora, their second child, came into the world at the old Northwest Hospital, situated right on Route 66, in December 1958.

Dora’s love affair with the cars and the Route started early. She still recalls the 1956 Chevy truck her father used to race at the Amarillo Drag Strip in the 1960s. Growing up in the era when Antique Row had breathed new life into the 6th Avenue stretch of Route 66 and the downtown neon of Polk Street beckoned young drivers, she met her future husband, Andy Meroney, in 1975 while cruising Polk in her mom’s 1956 two-door green-and-white two-tone Chevy Bel Air.

Andy and Dora married in March 1976 and started their own family, with daughters Ivy and Nikki. Though they moved away from Texas for a decade in the 1990s, the couple remained dedicated cyclists in far-flung places. In 2002, after returning to Amarillo, they rode across the USA on the Transamerica Bike Trail from  Yorktown, Virginia. “We dipped our rear tires in the Atlantic Ocean to begin the ride and three months later we finished the ride by dipping our front tires in the Pacific ocean in Astoria, Oregon, about 4,228 miles,” said Dora.

All along the way, Dora honed her appreciation for American roads and the people who travel them. Andy likewise sharpened his mechanical and building skills, which would come in handy years later in promoting Route 66.

In the early 1990s Willis Carroll bought the single-story house next door to his car lot on Route 66 as a home for Dora’s brother and his family. After Allen Carroll moved in 1996 the house became a storefront for Florence, a Nebraska native who long ago “fell in love with the state of Texas,” said Dora. That stretch of 66 had seen a decline in the late 1980s and early ’90s but was ripe for revitalization. Florence Carroll, only four-foot-seven, stood as a champion for the neighborhood, helping persuade the city to install brick sidewalks and restore some of its historic charm.

Also in 1996, Dora and Andy had experienced a tragic loss when their oldest daughter, Ivy, died. The couple returned to Texas in 1999, and Dora plunged into helping her mother at the antique store, now named Texas Ivy as a memorial.

Dora went on buying trips with her mother and sister and accompanied them to auctions, mastering the business. On the far end of the mile-long U.S. Route 66-Sixth Street Historic District, which had been named to the National Register of Historic Places in 1994, the ranch-style house filled with china and depression glass and furniture and collectibles promoted itself as “west of the rest”—but it quickly became a stalwart among the merchants and a destination for travelers.

And English ivy sprang up, unbidden, along its façade.

Today the deep green ivy drapes the entire front wall of the store, where a four-foot-tall metal cutout of the Route 66 shield provides a popular photo op. The sign, like the 66-adorned metal trash cans and light-pole standards that now grace the historic district, is Andy’s handiwork. Andy also for years drove the green Route 66 trolley on special tours, and he lends Dora a hand in other events and promotions as well.

“We started traveling the Route after coming to the store,” Dora explains. “We met Wendell Short with the Old 6th Street Association, and Delbert Trew from McLean and David Rushing from Shamrock.” These energetic promoters of the Route shared their love of 66. It was Dora who helped them make the first Amarillo Route 66 map of that era, a model she continues to update today.

The travelers they met back then were mostly Americans, she recalls. And there were buskers setting up street performances. As more travelers zoomed past the Route on Interstate 40, though, the challenge became “getting people down here,” she says. “You, the business, have to bring people in. You have to make your street look nice, and make sure it has something visitors want to see when they get here.”

The Old 6th Street Association, the Panhandle Tourism Marketing Council, the Texas Plains Trail Region, the Amarillo Convention & Visitor Council, the San Jacinto Neighborhood Association—many groups have worked hard to ensure the Route has something valuable for visitors. And Dora Meroney has been a constant in all of them.

Traveling from gathering to gathering in the brightly repainted “Yellow Imposter” MG with the 66 shield on the side, Dora has put her organizing skills and long institutional memory at their disposal.

Car cruises, a “Grills and Grilles” summer festival, and a Hunt for History on Amarillo’s Route 66 are but a few of the promotions she’s helped with. In 2018, Dora headed up the International Route 66 Festival, a multi-year effort to bring the big event to Shamrock, its smallest host city ever.

Today, when international travelers have started making up more of the Route 66 contingent than ever, the game is changing. An eight-state tourism passport program has finally taken root—published out of Slovakia—and is proving immensely popular with destinations and businesses.

(Dora and Andy were looking forward to a reciprocal trip to meet Route 66 enthusiasts in Europe this summer, in fact, when plans were derailed by Covid-19 concerns.)

There are always challenges and bright spots, Dora says, as the Route and its business climate evolve. Legislation to authorize consistent signage marking the way for travelers has been on preservationists’ agenda for years. When the City of Amarillo succeeded with a program in 2018 to mark its own 66 mileage, TxDOT brown signs mysteriously started to disappear, claimed Route 66 organization leaders in frustration.

It’s a dream of Dora and others to see Amarillo’s landmark water tower painted with the Route 66 shield. So is passage of H.R. Bill 801, which would designate Route 66 as a National Historic Trail.

Those are just a couple of possible strategies to help lead travelers to this part of the route as the 2026 Centennial draws nearer.

The freshest update of the Historic 6th St. on Route 66 Association (“Come Eat, Drink & Antique with us!”) tourism brochure lists 75 commercial storefronts in the 16 blocks from Georgia to Western, plus the additional block of McMasters Street where the district begins.

Three-quarters of them are filled with a delightfully motley assortment of establishments: from the Canine Fashions Pet Salon to Whispering Pines Antiques, from the Fibonacci Building (home to the Chamber Music Amarillo) to the Lile Art Gallery (where “Croc” Lile fashions his self-styled “Cadillite” jewelry from polished paint chips flaked off the Cadillac Ranch cars), from the 6th Street Massacre haunted house to the Long Hunter’s gun shop to the law office to the historic Nat (once an indoor swimming pool and a big-band showcase, now an antiques mall), the Route is as real as it gets.

Willis Carroll’s retired now; his car lot next door has been made over into Moe Dogs Grill. Florence Carroll passed away in 2004. Dora continues to serve the traditions that first led her to love this stretch of highway.

And Texas Ivy thrives, the beating heart of Texas’s Route 66.

US. route 66-Sixth Street Historic District, Amarillo, Texas
www.nps.gov/nr/travel/route66/6th_street_historic_district_amarillo.html
The U.S. Route 66-Sixth Street Historic District comprises 13 blocks of commercial development in the San Jacinto Heights Addition west of Amarillo’s central business district. It runs along an east-west axis through a grid system of streets between Georgia and Forrest Avenues. Developed as an early 20th-century streetcar suburb, the district was transformed by the establishment of a national transportation artery running through its center.