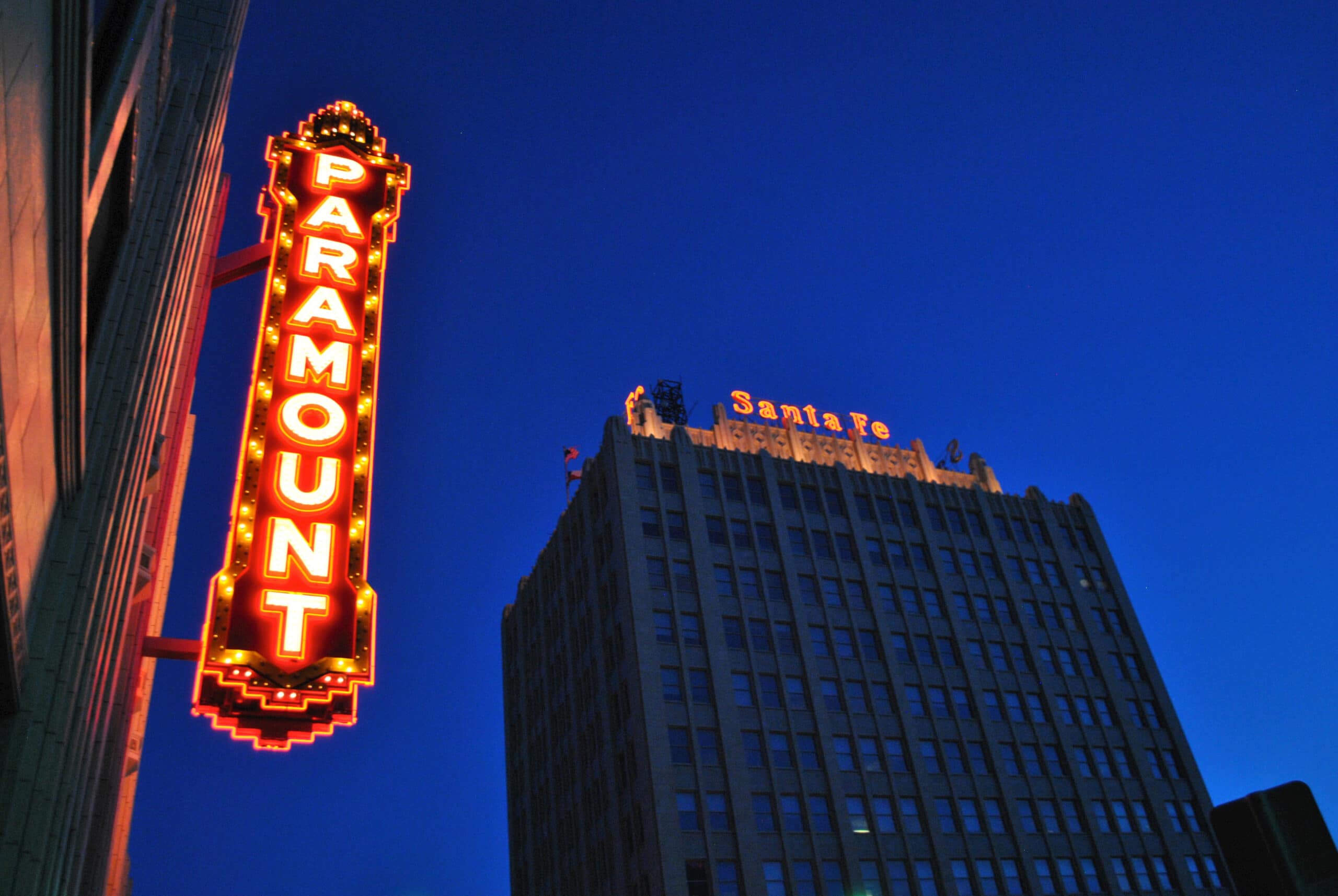 Since its founding in 1887 as a Panhandle cowtown and rail hub — perhaps along yellow-hued creek banks lined with bright yellow flowers — Amarillo has been labeled a city with bright prospects.

When journalists and hometown boosters conspired in the 1950s to nickname the region “the Golden Spread,” the city’s gilded identity was firmly fixed.

These days, visitors to the Yellow City’s downtown and Route 66 thoroughfares can experience a revival of the city’s glow by night. Opportunities abound for appreciating its history and culture after dark.

The city, in fact, owes its origins to the Fort Worth & Denver Railway, which opened access to the Texas Panhandle in the 1880s and was later subsumed by the Santa Fe network. “Amarillo would not exist,” writes historian Mike Cox, “if it had not been for the iron.” Cox considers Amarillo the largest city in Texas that owes its founding primarily to the railroad.

Potter County (of which Amarillo is the seat) honored that heritage in 1995 by acquiring the vacant former regional offices of the Atchison, Topeka, and Santa Fe, a 13-story 1930 gothic revival masterpiece now restored as a Center City landmark. The ruby Santa Fe sign shines brilliantly over Amarillo once again, with uplights washing the building in various colors for special emphases.

Though most of the Santa Fe Building interior is security-restricted because it houses a working courtroom, visitors can step into the lavish ground-floor lobby. On occasion, behind-the-scenes tours open other features of the well-preserved structure, including the basement boiler room and the top-floor auditorium, for viewing.

Elsewhere along Polk Street, the city’s main commercial route, vivid neon signs in historic designs have been preserved or introduced. With the restored vertical marquee of the 1932 Paramount Theatre (817 S. Polk) in the vanguard, neon signs were added to the Amarillo National Bank garage (6th and Polk), the Courtyard by Marriott hotel in the National Register– listed 1928 Fisk Building (724 S. Polk), the former Kress department store (700 S. Polk) and others. A variety of shopping, wining-and-dining, music, and event venues make the neon-lit sidewalks of Polk Street an inviting nightlife destination.

The most recent major addition to Amarillo’s downtown scene is the Embassy Suites by Hilton Downtown, which opened in 2017 in the Civic Center complex next door to the Globe-News Center for the Performing Arts (500 S. Buchanan). Anchoring a redeveloped shopping, office and convention corridor along South Buchanan Street, the Embassy Suites shines new light on a sector of Center City that will soon be home to a multi-purpose event venue — with a minor-league baseball team playing under the lights in spring 2019.

Outside of downtown but incorporated into the city’s Cultural District (designated in 2016) is the U.S. Route 66–Sixth Street Historic District. Comprising 13 blocks of National Register structures along highway mileage that was paved as early as 1921, the road became part of the federally designated Route 66 in 1926. The district is known for its lively arts and entertainment scene, ranging from Tejano tunes at Braceros Mexican Grill & Bar (2822 SW 6th) to country at the Broken Spoke Lounge (3101 SW 6th) to chamber music at the Fibonacci Building (3306 SW 6th). If you want to pay homage to the granddaddy of all Route 66 businesses, however, that would be the Golden Light Café and Cantina (2906 SW 6th), a dive joint that’s been serving up burgers, beer and an impressive array of live bands since 1946.

One final stop is worth a short jaunt north of town on a summer night. Wonderland Amusement Park began operation as the locally owned Kiddie Land in 1951. The park is open May through September, but its neon-bedecked rides can be experienced as late as 10 p.m. in midsummer.