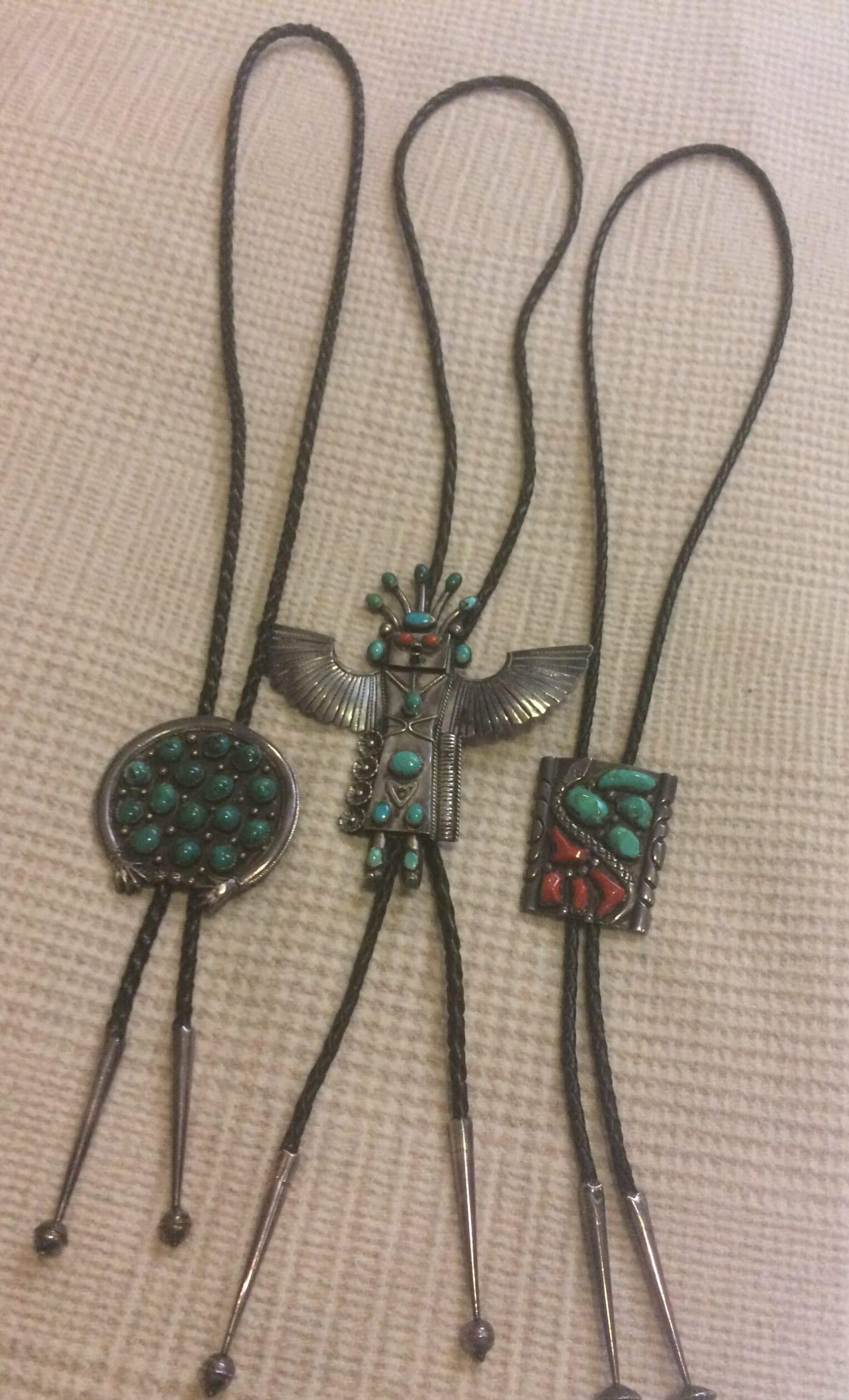 My father lived in Arizona for many years; when he died, he left me a classic Native American silver bolo tie with turquoise and coral stones. This whetted my interest in bolo ties. I learned of their practicality compared to the traditional American necktie. The bolo is much easier to put on than a regular necktie. Also, the bolo tie makes the wearer stand out, certifying that he is from the Southwest.

In the 1800’s, cowboys began using kerchiefs for functional as well as decorative purposes. Slides  used to hold the kerchiefs were often made of braided leather and sometimes from decorative silver. The early cowboy ties evolved to what is known as the American cowboy bolo of today which is made with a leather string tie, cord tips and a decorated silver slide or clasp.

Many of the well-known movie cowboys of the 1930s through the 1950s, including Hopalong Cassidy and the Cisco Kid, wore string ties with attractive silver slides. As a result, the bolo tie – also called a bolo tie or shoestring tie – became a recognizable and popular alternative to the traditional necktie.

Some tuxedo stores offer simple bolos to wear with their tuxedoes. I have worn a beautiful Zuni bolo with black onyx and mother of pearl inlay to formal events.

Native American bolo ties have become recognized as a unique form of American art and have been featured in museum exhibits. Unlike the common cowboy scarf slides, the Native American bolos are made of silver and often decorated with stones from the Southwest.

Hopi, Navajo, and Zuni artisans are well known for creating attractive bolo ties. Zuni bolos are distinctive for the use of beautiful stone inlays. Native American bolos feature a wide variety of tribal symbols including feathers, arrows, and bear claws in their designs. Some symbols used even go back to those used by Spanish conquistadors on their horse gear.

I became hooked on finding and wearing bolos and I now have 90 bolo ties in my collection. If you look carefully, you can find bolos in Texas shops. I have found excellent bolos in the Fort Worth Stockyards and at the Annual Fort Worth Show of Antiques, Art, and Jewelry held at Fort Worth’s Will Rodgers Memorial Center. It is possible to roughly date bolos by the of clasp on the back of the bolo slide.

Some bolo ties made by nationally recognized Native American artists, such as Charles Loma, Peter Nelson, or Mark Lomayestewa, feature modern non-traditional design. You can expect to pay top dollar for these bolos. But there are many bolo ties made by recognized Native American artists available at affordable prices. Ultimately, the most important factor is whether you like the bolo and want to wear it.

from House Concurrent Resolution No. 12

WHEREAS, A singular fashion associated with the American West is the bolo tie, also known as the bola tie, which is distinguished by its decorative clasp that fastens a length of cord or string; a staple of the western-wear fashions sported by a large number of Texans, the bolo tie conjures up the romance of the pioneer era and speaks to the determination and independence that figure so prominently in Lone Star lore; and …

WHEREAS, The bolo tie remains popular among many American Indians, and intricate designs fashioned by Native American craftspeople using silver, turquoise, and other materials stand as some of the finest examples of bolo tie artistry; these factors make the neckwear a poignant testament to this region’s original inhabitants and also to the many people of American Indian descent who are today Texas residents; and

WHEREAS, A fashion accessory that can be personalized to reflect the wearer’s taste and interests, the bolo tie is well matched to the individualism that is so much a part of the Texan identity; in selecting or designing a clasp, bolo tie wearers are able to express their personal flair; moreover, the selection of a bolo over a standard tie can suggest that the wearer refuses to be bound by convention and relishes the freedom to exhibit a distinctive sense of style even as they maintain a dignified, formal appearance; and

WHEREAS, The bolo tie symbolizes both the state’s iconic western culture and the originality of its residents, and it is indeed appropriate that this handsome and unique apparel receive special legislative recognition …

Doug Harman earned his doctoral degree from the American University. He served as the City Manager of Fort Worth from 1985 to 1990; afterwards, he was president of the Fort Worth Convention and Visitors Bureau from 1991 to 2007. He is an avid collector and wearer of bolos.