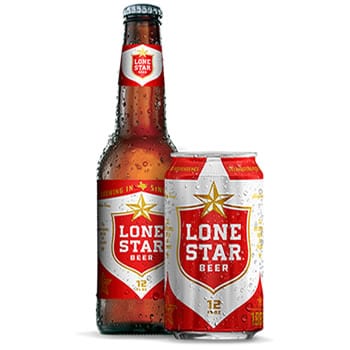 Served in honky tonks and high rises, Lone Star beer has been a Texas institution for 135 years. The brand’s iconic logo shines bright at dance halls, restaurants and uptown bars throughout the state. A well-known brewmaster from St. Louis introduced Texans to Lone Star in the late 19th century. Over the next hundred years, the brew became a mainstay throughout the state, most notably as part of Austin’s growing music culture.

n 1883, Adolphus Busch partnered with a group of businessmen to build the Lone Star Brewery near downtown San Antonio. The facility’s modern technology and own bottling plant spurred Lone Star’s early success over rivals, mostly small-batch brewers lacking the ability to mass-produce their suds. Times were good and beer production high until 1920, when Prohibition halted breweries nationwide. The original plant would never reopen, but the Lone Star spirit lived on.

After Prohibition ended, brewer Peter Kreil crafted the beer’s signature formula in 1940, dubbed the Original 1940. The light-bodied, fizzy brew was a hit with Texans. Classified as an American lager, the smooth-sipping beer made with artesian well water gave it a fresh and natural flavor. Lone Star was perfect for a sweltering day on the Panhandle plains or for a relaxing afternoon at Austin’s Barton Springs.

Although the brand remained a Texas favorite through the mid 20th century, Lone Star stepped onto the national stage in the 1970s. The center of Austin’s music scene, the Armadillo World Headquarters, served Lone Star to thirsty concertgoers on a nightly basis. The light, easy-to-drink beer was popular with Austin’s counterculture, perhaps for its signature low cost and smooth flavor. In 1974, the famous marketing slogan “Long live longnecks” grew out of a conversation in the Armadillo parking lot. What followed was the cementing of Lone Star beer into Texas culture, with ample help from the likes of country icons Willie Nelson, Jerry Jeff Walker and Waylon Jennings. Texans supported the “National Beer of Texas” for years to come.

And as any gracious Texan would, Lone Star supports its home state to this day. The story of Lone Star has intertwined with the history of Texas, and the company does its part to save the past for future generations. To that end, the Lone Star Brewery launched an initiative in 2017 to help preserve Texas dance halls through its Tabs and Caps for Texas campaign, an effort to raise $30,000 for Texas Dance Hall Preservation. The company will donate $1 for each Lone Star bottle cap or tab placed in acrylic cowboy boots located at participating locations throughout the state.

The Lone Star Brewery has certainly left its mark on Texas, and is committed to preserving the history of the only state it’s called home. So raise a longneck to Waylon and Willie … and don’t forget to drop your cap in the boot.