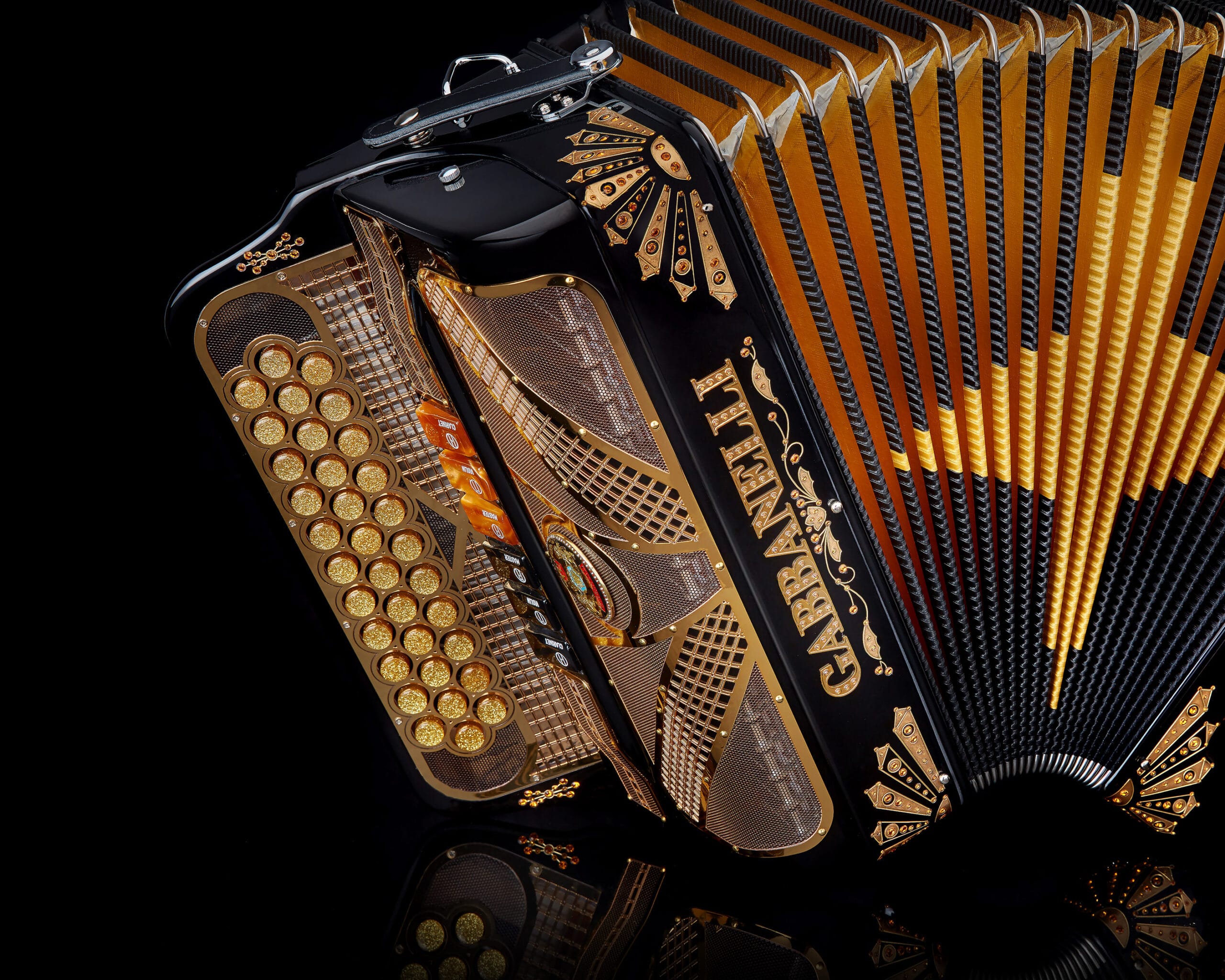 It’s a well-known story — the one where European conquerors ravaged the New World with disease in the 15th century. That story repeated itself, in a very different way, in the early part of the 20th century in Texas.

Only it wasn’t illness that German and Czech settlers were spreading to unsuspecting Hispanics, Creoles and Cajuns. This time, it was a musical instrument from which they would not recover.

It started in the dance halls in the Texas Hill Country. While German and Czech farmers danced the polka on Saturday nights, their Hispanic farmhands would gather nearby to watch and listen.

It was a mistake. Because they had no immunity, the button accordion began to spread through these Hispanic communities like wildfire.

From New Braunfels and San Antonio, down to Brownsville, back up the coast to Corpus Christi and Houston and then across East Texas like a ladle full of gumbo, the accordion resisted all attempts to control it. And the infection, it seems, is now permanent.

The diatonic button accordion had many qualities that made it attractive to a Texas working-class agrarian community. First, they were cheap and easy to play. The early models had just one row of buttons; later models had two, and in 1906 you could buy one for as little as $3.

Another key to success? They’re loud — you don’t need an amplifier or electricity. Add a drummer and guitar, washtubs of cold beer and voila, as the Cajuns say. The early Sears catalogs described the accordion as an “orchestra in a box.”

Rideau’s inspiration was the great Boozoo Chavis, but he developed a sound of his own. Young people flocked to hear him.

“People wanted to see someone young and coming into their own style, and still feel the richness of the heritage and the culture in the music,” Rideau says.

As popular as zydeco is in Texas, conjunto music is just as popular, and its heritage just as rich.

Although a song like “Viva Seguin” is clearly Tejano music — music made by Hispanics in Texas — listen carefully and you can hear a polka, with electric bass taking the place of the tuba.

These days, conjunto music, like zydeco, is as popular as ever in Texas. Young accordion stars wield their instruments like lead guitars, spinning, stomping and dancing across the stage.

While it’s mostly men behind the squeeze box, there are female stars, too. One of the first (and still one of the best) is Eva Ybarra, known as “Queen of the Accordion.” Ybarra is just over 5 feet tall, and if you didn’t hear it, you’d never believe that such a voice could emerge from such a small package.

On one occasion, after some of the audience shouted out “Eva!,” the other members of her band left Ybarra stranded in a dark parking lot. Being a curiosity was one thing; outshining male musicians was another. Her mother had to pick her up.

“My mom said, ‘You don’t have to play the accordion, I’m going to buy you a piano,’” Ybarra says. “And my dad said, ‘Don’t listen to your mom. Your key is the accordion.’ And, you know, my dad was right.”

If conjunto and zydeco are still attracting plenty of talented young Texas accordion players, German and Czech polka, the wellspring, aren’t doing quite as well. While there are still German and Czech communities in the Texas hill country, they are no longer bound together by language. Their children and grandchildren mostly listen to rock or country, though there are exceptions.

Fort Worth has a young accordion star named Ginny Mac, and accordionist Chris Rybak hails from Hallettsville, Texas, near Shiner and Yoakum. Rybak is Czech; his family has been in Texas since 1880. He got his first accordion at age 12.

“I never actually took lessons for the accordion,” Rybak says. “I started playing by ear. My dad had a polka band and still does, and the biggest training I had was just going to the dances and listening on the sidelines.”

While a band along the Texas border can make a living playing only conjunto, and a band in Houston can do the same playing only zydeco, a young German or Czech accordion player is wise to play a broad repertoire.

Rybak plays traditional polka, of course. But he also plays zydeco, conjunto and country, multiplying his chances for work. He makes solo albums, spends a few weeks in the summer playing festivals in Italy, Austria and Germany — it’s not a bad life.

Rybak plays a Roland digital accordion, a new kind of accordion which allows him to shade the sound in different ways. At times, he can make it sound a little violiny, or fiddly.

Each spring, the biggest accordion festival in the state is held in Houston at Miller Outdoor Theater. Many of the state’s best accordion players — young and old, includ- ing Rybak — gather for the Accordion Kings and Queens competition.

Their loyal followers, hundreds of German Texans, Hispanic Texans, Cajun Texans and just plain old Texans, dance, all together, in front of the stage.

AN ACCORDION IS EQUAL

parts math and magic, a glistening and gorgeous instrument on the outside, airtight and busy on the inside.

More than 1,000 pieces are required to make one, including mirrored buttons and Swarovski crystals for flash. The pearl-like shell is celluloid dipped into a vat of acetone and water, which goes soft onto the wood case and requires a month to dry before it’s buffed and sanded to a creamy candy-colored finish. Inside pieces are held in place with beeswax. Each reed is handmade. The metal is harmonic steel imported from Sweden, which resists oxidation. Tension on the springs inside must be perfect.

Mike Gabbanelli lives inside the accordion. He’s a third-generation artisan schooled in the minutiae required to produce one of these instruments. He has a warehouse where about 100 decrepit accordions sit.

“I won’t throw them away,” he says. “I know what it takes to build one of these instruments. Even if it’s toasted, I’m not going to chuck it away.”

The Gabbanelli store in southwest Houston is divided in half. Walk in the front door, and you’re standing in the showroom, which looks like an exploding rainbow, with radiantly colored Gabbanelli accordions of various sorts — diatonic, chromatic and piano —- sparkling from the ample sunlight that pours through the front windows. The room is impeccably clean and not terribly cluttered.

Behind the counter, a door leads to messier confines, with a large workbench and accordion parts everywhere. A long line of accordions needing repairs sits on the floor. Some appear fine on the surface, others look like they fell from the back of a truck in a rain storm and were left to rust.

“Even the worst piece of junk I can make play again,” Gabbanelli says.

He pushes through 15 to 20 repairs each day, the result of being a rarity in his field: a young craftsman attuned to the delicate nature of the instrument.

An accordion possesses a duality that represents its maker and its player. The inside is a meticulously constructed matrix of little pieces, precise and functional rather than flashy. The exterior screams with color and character. Mike Gabbanelli quietly fuses these two elements together and passes the instruments along to spirited accordion players like Ramon Ayala and Intocable’s Ricky Muñoz, both Gabbanelli enthusiasts, who entertain thousands.

Gabbanelli juggles repairing the old with designing and producing the new. His father began making Gabbanelli brand accordions 60 years ago and started the Gabbanelli Accordions & Imports company in 1991. Gabbanelli and his wife, Elia (he’s the company’s CEO and president, she serves as vice president), took over when he died in 2003 and have tried to balance the tradition of the trade with new developments that can enhance sound or durability.

Quietly intense, Gabbanelli, 49, uses the word “artisan” several times as an understated shorthand for the knowledge and skill required to work with these instruments.

“He’s being modest,” his wife says. “He’s the youngest expert in the field.” Even her comment is modest. Only a handful of people in the world can precision-tune an accordion by ear.

That rarity of expertise can be attributed to changing musical trends. Gabbanelli has siblings, but he’s the only one who was suf- ficiently intrigued by his father’s craft to learn it. Gianfranco Gabbanelli came to the United States in 1961 from the Marche region of Italy, where he was a tuner in an accordion factory. Making musical instruments was family work — Mike Gabbanelli’s grandfather started at age 10 (he also worked with stringed instruments). One of Gianfranco Gabbanelli’s brothers specialized in making keys; another did woodwork.

The elder Gabbanelli’s decision to leave Italy was regarded by his family with shock, his son says. He came to Houston in 1961 to repair and tune Italian-made accordions. He got to Houston with $2 and no understanding of English. After arriving, he began going by the Anglicized version of his name, John.

“He suffered through a lot of bad jobs, but he had a lot of pride, too,” Mike Gabanelli says.He made and sold Gabbanelli Accordions out of his home for 30 years before moving the operation to the West Bellfort location where it remains.

Houston was a prime place to be an accordion-maker, with accordions prevalent in three different musical genres: central Texas beer-hall music from Europe, Louisiana Cajun music and Mexican music moving up from the border.

All three types of music can still be heard in this region.

The Gabbanelli name is golden among players of conjunto, norteño and ranchera, where demand for accordions is strongest today. Band tour buses will occasionally stop in front of the unassuming building when an accordionist needs a new instrument or to have an old one repaired. Gabbanelli recalls the time he was in the back working and his father asked him to go to the showroom to deal with two customers, one of which was ZZ Top’s Billy Gibbons.

“He said, ‘Mike, there’s some weird people out there — one has a big beard and one has green hair. Go take care of them,’” Gabbanelli says.

Rock and pop bands generally lack an accordion. When the instrument does find its way into more mainstream fare, it’s often as an accent instead of a foundation. But the accordion remains king in much Spanish- language music.

“With a lot of these Latin bands, the focal point is the accordionist,” Gabbanelli says. And he points out that accordionists like for their instrument to draw attention. “A lot of our customers like a little extra shine,” which he provides with ample use of Swarovski crystals.

“It’s like a rap video,” Elia Gabbanelli says. ‘They have the shiny cars they want to show off. These guys, it’s their accordion.”

The Gabbanellis keep about 1,000 accordions in stock. “Everybody wants to see 50,” she says, “before they decide on the exact one.”

Between creating new designs and making daily repairs, Gabbanelli admits, “I’m spread pretty thin.” He picks up an accordion and squeezes out a few notes. But typically, he says, he doesn’t play for enjoyment.

“I have to play 15 of these instruments each day to make sure they’re functioning properly,” he says. “If everything’s not perfect, the musician will know it immediately. They’re picky, and they have good ears. These guys didn’t learn off of books — they’re self-taught with their ears.

“It’s my job to let the musicians shine,” Gabbanelli adds. “I’m happier being the guy who stays behind the scenes.”