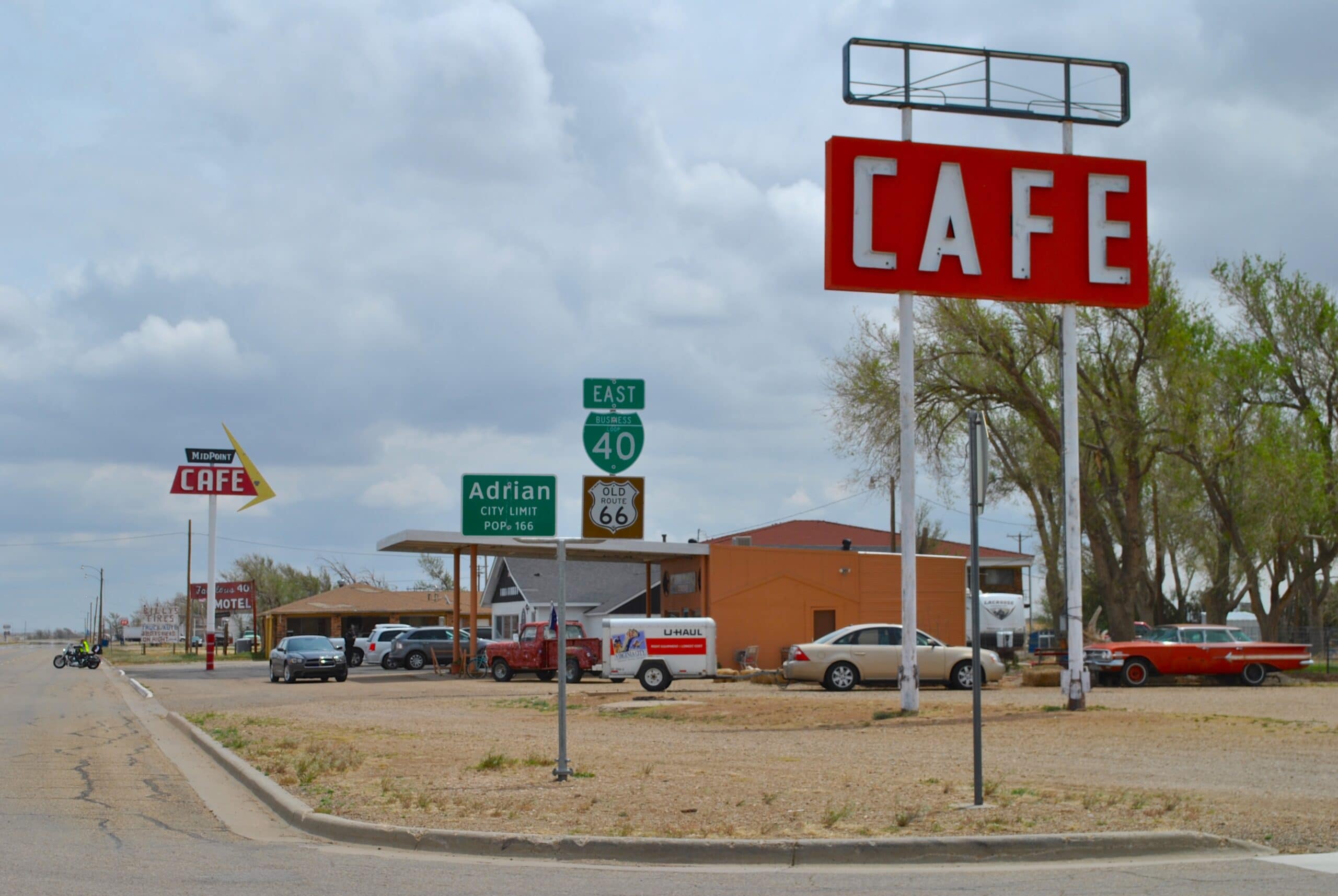 Back in the salad days of auto travel, when Route 66 wasn’t even paved all the way from Amarillo, Texas, to Tucumcari, N.M., Zella’s Cafe, starting in 1928, dished up grub for hardy cross-country travelers at tiny Adrian, a shipping point on the Rock Island Railroad not far from the New Mexico line.

By the time the Chicago-to-L.A. route was hard topped a decade later, the cafe had changed hands a few times but was still cranking out 24-hour-a-day business. Over the decades of Route 66’s heyday, one owner became renowned for serving fresh homemade pies.

Enter Fran Houser, who bought the cafe in 1990 and renamed it the Midpoint, introducing the Ugly Crust Pie — a deliciously decadent, six-inch-tall creation with a rustic, hand-shaped shell and a heap of whipped topping. Houser and her family worked diligently to keep the place going in the years after Route 66 was decommissioned and bypassed by Interstate 40. Her industry was amply rewarded in 2006 when a pile of picture-makers from Pixar pulled up. Hollywood, it turned out, was planning an animated film inspired by Route 66’s automobile culture. Cars premiered in May 2006, ranking No. 1 in its opening weekend, with Houser’s Midpoint Cafe the real-life model for the Flo’s V8 Café.

Two owners later, after Houser’s retirement and the retirement of successor Dennis Purschwitz, another local family is carrying on the Ugly Pie tradition. Sisters Brenda Hammit and Carrie O’Leary, whose mother, Sandra Adams, had been the Midpoint’s chief pie-maker for half a decade, decided to invest in their own little piece of Route 66 history. O’Leary and her family grew up in California and ran racehorses before settling down in Colorado and Texas. They moved home from Denver, and the latest iteration of the cafe opened a spring-to-fall annual season March 26.

They’ll serve up burgers with a side of nostalgia in the ’50s-stye diner daily from mid-March through November, with special-order pies for Thanksgiving and Christmas. And Mom “has included her signature lemon meringue,” O’Leary says, “which is a must-try!”

Route 66 is again alive and well in Adrian, 47 miles west of Amarillo, with tour buses, bikers, RVers and others pulling up to the Midpoint sign daily and stopping in for a bite of lunch.

“Our families are excited to be part of the Route 66 family,” O’Leary says. “We’ve had so much support from them and from Oldham County.”