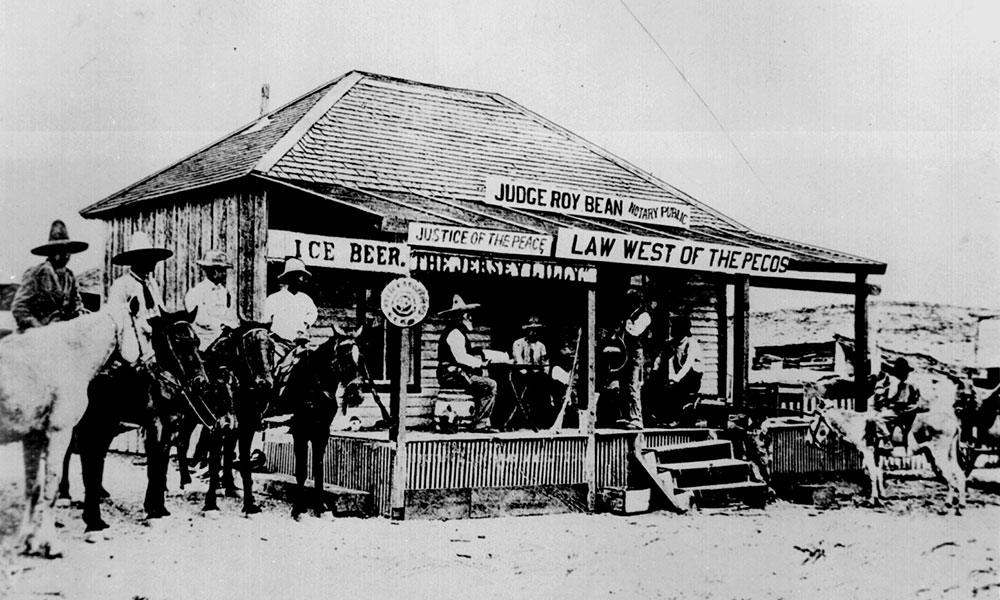 In the late 1800s, Langtry, Texas, was a bustling little railroad town — a way station for railroad crews and the company they attracted, including businessman Phantly “Roy” Bean. But even with such humble beginnings, this stop on the Southern Pacific rail line between Shumla and Pumpville soon earned legendary (and notorious) status.

With trains relying on steam during those first years, water stations were required every 15 miles, and railroad crews would live at temporary camps along the way while constructing portions of the rail line.

But crews weren’t the only inhabitants at these camps. The railroad construction brought immigrants, laborers, investors, gamblers, preachers, settlers, prostitutes, ranchers and merchants. Many were ruffians who brought with them all sorts of nefarious activity. In June 1882, the railroad company requested the Texas Rangers’ presence at one of these temporary railroad camps, Vinegaroon, to help maintain the peace in the increasingly violent community.

For reasons unknown, the Texas Rangers recommended Bean be appointed as magistrate. He was not the most likely candidate for judge. Before coming to Vinegaroon, Bean had been making a living in San Antonio selling stolen firewood and milk diluted with water from a local creek (to increase profits). When buyers began noticing minnows in the milk, Bean exclaimed, “By gobs, I’ll have to stop them cows from drinking out of the creek!” The inevitable illnesses suffered by his dairy customers put a damper on his business, so he set off to sell goods — mostly liquor — to railroad workers. In Vinegaroon, he was often known to be drunk in his own tent saloon, and his penchant for gambling was no secret.

The outcry for justice in the region continued to grow until the Pecos County Commissioners Court took action on Aug. 2, 1882, and Roy Bean was officially appointed as justice of the peace for Precinct 6, Pecos County, Texas.

Although it was an inauspicious start for the man who’d be appointed judge, Bean nevertheless proved effective in his role as the “Law West of the Pecos.” He actually began serving a few months prior to the official date of his appointment. His rulings, while unorthodox and often whimsical, served to keep the peace in a rough, challenging land.

When the railroad camp moved from Vinegaroon, so did Bean. He eventually settled in Langtry, previously known as Eagle’s Nest because of a golden eagle nest high on a bluff along the Rio Grande that can still be seen today by the observant traveler.

It’s generally assumed that Bean named Langtry after the English actress and opera singer Lillie Langtry, with whom he was rather obsessed. In truth, the town is named after railroad engineer George Langtry. The truth isn’t as endearing as the legend in this case, but more often than not, when referring to Judge Roy Bean, the truth is often more outlandish.

Lee Hoy is supervisor of the Judge Roy Bean Visitors Center in Langtry.