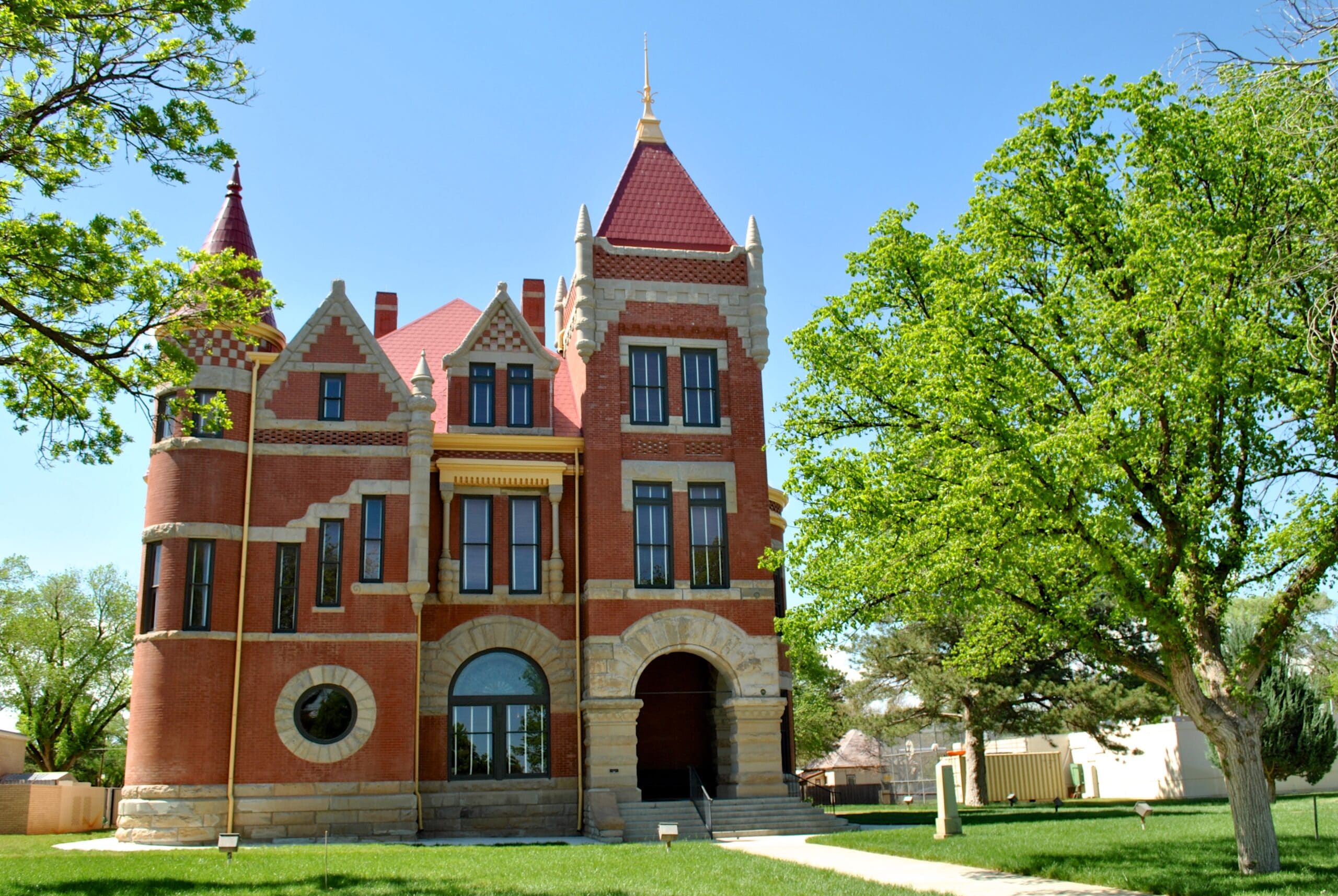 The Mysterious Lady in Blue

“Our colonists and Villagers, having no whisky on which to wast[e] time and taxation,” read the first issue of the Clarendon News on June 1, 1878, “will have no trouble in keeping closely up with every public improvement necessary.”

The monthly newspaper spread the vision of Methodist minister Lewis Henry Carhart, a New York native who found himself in charge of a North Texas church during Reconstruction. His enthusiasm for establishing a Christian colony in the Panhandle drew in-laws and other family members into the enterprise, which he named Clarendon for (some say) his Canadian-born wife, Clara, or (more likely) the English city to which his financial backers had ties.

The British-based Clarendon Land and Investment Company infused capital into the project in spring 1878, and a townsite was swiftly platted with lots sold to clean-minded Easterners and Midwesterners. Compared to frontier towns like Mobeetie and Tascosa with wilder reputations, the church-going, teetotaling Clarendon citizens earned their community the nickname of “Saints’ Roost.”

Clarendon prospered, with sufficient building supplies freighted in to construct not only homes but stores, hotels, a meat market, a blacksmith’s shop and a doctor’s office by 1885 — and enough pulpits to hold seven Methodist preachers. Plans were made for a Methodist college. Carhart himself, though he moved to pastorates in Dallas and then Fort Worth, set up his own ranching outfit, the Quarter Circle Heart, in the newly formed Donley County.

Clarendon mostly hewed to the straight and narrow even after moving lock, stock and barrel six miles south in 1887 when the Fort Worth and Denver City Railway came through. Though a few saloons and gambling dens briefly took root, they were razed to make way for the Methodist-affiliated Clarendon College in 1898.

By 1910 Cornelia Adair, widow of the man who had backed Charles Goodnight in his Panhandle ranching ventures, established a hospital on the hill above Clarendon to provide medical care primarily for the JA Ranch cowboys. A strong supporter of the Episcopalian church, Cornelia Adair also funded wholesome activities in Clarendon such as the Boy Scouts and the city’s first YMCA building.

Today, the Adair Hospital houses the Saints’ Roost Museum, where visitors can learn more about the “sobriety settlement” and the rowdier life on the surrounding range. Chief among the museum’s exhibits are artifacts and documents related to the Goodnights and the Adairs; to Native American heritage of the area; and to the authentic lifeways of the prairie. One of the museum’s most fascinating and important collections consists of the drawings, prints and cards created by renowned Western artist Harold Dow Bugbee, whose father ranched in Donley County. The museum hosts the annual Charles Goodnight Chuck Wagon Cookoff each September.

Clarendon wasn’t without its sinners, either, as the last legal hanging in the Panhandle took place there June 3, 1910, when one G. R. Miller was executed for the second of two murders committed in a crime spree the previous year. These days travelers can wet their whistle at a few dining establishments such as JD’s Steakout or even Jinda Cafe, which specializes in Thai cuisine, both on the main drag, West 2nd Street. Donley County legalized alcohol countywide in 2013, when the first countywide measure was added to the ballot since 1902.

If Sunday services are more your cup of tea, however, you can still worship with the Baptists, the Methodists, the Catholics, the Nazarenes, the Episcopalians, the Church of Christ or several nonsectarian groups.

Just don’t go looking for the original Saints’ Roost — the townsite was thoroughly dunked by the creation of Greenbelt Reservoir in 1968, and it rests today beneath the popular recreational lake.