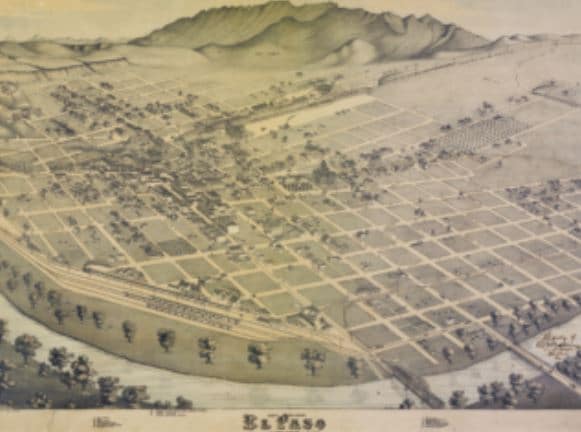 Long before there was a city called El Paso, or even a transnational border, there was a river.

The Navajos and the Apaches and even the British had their own names for it, but the Spanish explorers who rode up toward the mountain ranges gave it their own: Río Bravo del Norte, the wild and turbulent river at the Pass of the North.

For years, the Río Bravo formed a barrier between the Spaniards to its south and the native Indian populations on its north, but shifting land claims and boundaries over the centuries imbued the entire region with the culture and language of the Iberians who’d come first, and in force, to this part of the continent.

El Paso thus sprang from a Spanish town founded south of the Rio Grande, where it in due time became part of an independent Mexico; split through the mitosis of settlement on lands north of the river; and coalesced as a twin on the U.S. side when pioneer Anson Mills renamed the fledgling town El Paso as well. The double El Paso spanned a fluid border during the American Civil War and beyond, until the Mexican city adopted the name of its republican hero Benito Juárez in 1888, and El Paso, Texas, retained its name.

The Spanish influence on both sides of the Mexico–United States border still flows richly, however.

Visitors today wanting to appreciate this vibrant intermingling of art, life and commerce might start the way the earliest natives did: on foot, exploring the city center at ground level. (El Paso’s recently revitalized streetcar loop gives them another easy alternative to driving, and the closest thing to approximate the conquistadores’ horseback travels! An all-day pass good on streetcar and buses is $3.50.)

At San Jacinto Plaza (114 W. Mills Ave. at the corner of Oregon Street), a fiberglass sculpture by El Paso native son Luis Jiménez (1940–2006) honors the city’s colorful past, when real-life lagartos graced the plaza’s fountain. Soon after the city of El Paso acquired land in 1881 that had been Juan María Ponce de León’s rancho, the parks commissioner introduced alligators into the fenced pond. Fondly named gators populated the pond into the 1970s, when the tradition was transferred to the El Paso Zoo.

The 1968 El Paso Main Public Library (501 N. Oregon St.), features a mural by El Pasoan Tom Lea depicting the various cultures that have contributed to the region’s history. Lea’s masterwork, the 11-by-54-foot “Pass of the North” mural, can be viewed at its original site in the 1936 R.E. Thomason Federal Building and Courthouse at 511 E. San Antonio St.

Plan an hour or more for the El Paso Museum of History (510 Santa Fe St.), depending on how many of El Paso’s four-plus centuries of Spanish heritage you’d like to ponder. The two- story museum provides a comprehensive overview of the region’s role in both state and national history. Visitors may explore exhibits and programs that reflect the robust multicultural and multinational character of the state’s far western border region. Step into the future by leaving a digital memory tagged in the museum’s 3-D Digital Wall, an outdoor interactive exhibit that brings El Paso history to life on a giant, colorful screen.

Turning back south, stop in at the El Paso Museum of Art (1 Arts Festival Plaza), whose watchword is “Unbound by borders, discover the world of art.” While this major museum is best known for its Kress collection of 12th–18th-century European art, it’s developed a major collection of contemporary Southwestern United States and Mexican artists.

The rooftop terraces of the 1912 Trost & Trost masterpiece Hotel Paso del Norte 3 (South El Paso Street at East San Antonio Avenue) were a popular place for guests and locals to watch firefights between revolutionaries and the Mexican army. Presidents, performers and Pancho Villa once stayed here, reveling in luxurious decor that includes a 45-foot-diameter Tiffany stained-glass dome. The hotel is currently undergoing a multimillion-dollar renovation by Marriott Autograph and is slated to reopen in March 2020.

From there, walk five blocks or so down El Paso Street to the El Centro shopping district. Open-air market-style shops line the streets of this commercial district that hugs the border of Mexico. Cultures have blended here, bringing Lebanese, Korean and Mexican immigrants together, among others, to create a multicultural American atmosphere.

Colorful signs in Spanish and other languages are a hallmark of the district, as are storefronts and murals. Stop by to see the “Sister Cities” mural by Los Dos at Father Rahm and El Paso Streets.

At the Sun Metro station (601 S. Santa Fe St.), catch the streetcar, returned to service with modern-day conveniences in 2018. It will make a 4.8-mile figure-eight loop heading north across I-10, passing through the Sunset Heights historic neighborhood (where wealthy refugees resettled during the Mexican Revolution and Pancho Villa once lived) and out to the UTEP campus.

Coming back toward downtown on the streetcar as you cross I-10, you’ll see the bustling Hispanic community of El Segundo Barrio, “the Ellis Island of the Border,” named to the National Trust’s 2018 list of the 11 most endangered places in the U.S., to the south and east. As you ride, continue to spot murals evocative of the city’s Spanish heritage, and enjoy the vista across the Rio Grande to Ciudad Juárez.