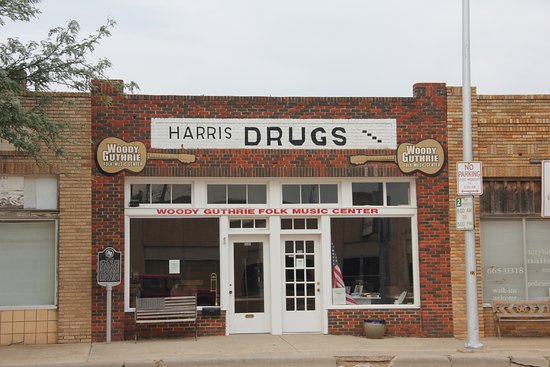 “Woody Use To Live Here Too” reads the T-shirt I once snagged for $10 at the old Harris Drug Store building on Cuyler Street, the main thoroughfare of Pampa, Texas.

Back in 1929 Woodrow Wilson “Woody” Guthrie, who’d come to Pampa as a teenager from the oil boom-and-dust town of Okemah, Oklahoma, spotted a guitar in the store. Proprietor Shorty Harris, according to local expert Michael Sinks, told the young man if he learned how to play the guitar, he could have it.

Guthrie took up work as a soda jerk at the store’s front counter and, between helping customers, taught himself chords and strums. He also began making up lyrics of his own. And yes, Harris gave him the guitar.

It was in Pampa that Guthrie first sought fame through music. With Matt Jennings and Cluster Baker, Guthrie made his first attempt at a musical career, forming the Corn Cob Trio and later the Pampa Junior Chamber of Commerce Band. He also learned to draw, producing cartoons and more realistic renderings. And he fell in love with Mary Jennings, Matt’s younger sister. Woody and Mary were married in 1933, and together had three children.

But the dusty days of the 1930s weren’t any kinder to Pampa than the oil play had been to Oklahoma, and soon Guthrie left his family behind and migrated west with the Okies in search of odd jobs and stardom. He knocked about on the West Coast, a period in his life he describes in his memoir Bound for Glory, and achieved renown among the working poor via the airwaves of Los Angeles radio station KFVD.

Guthrie did stints in New York City in the early 1940s, making a name for himself with songs of protest and activism, and he returned briefly to Pampa. Ever the outsider, he departed once again, this time to the Pacific Northwest, where he created the Columbia River Songs. Serving in World War II, he turned his talents to ballads that blasted facism and rallied the troops, such as “You Better Get Ready” and “The Sinking of the Reuben James.”

Remarried and resettled in New York after the war, Guthrie worked on numerous creative projects. But his behavior turned erratic, and he left a second family behind. In California he married a third time; throughout his travels and appearances in the early 1950s, he was treated on numerous occasions for misdiagnosed conditions. In 1954, living once again in New York, he was found to suffer from Huntington’s disease, a degenerative nerve disorder, and was hospitalized for long-term care. Folk singers of the Vietnam protest generation came to visit. Woody Guthrie died in 1967, a legend.

Thanks to Pampa champions Thelma Bray and her sister, Velma, a group of citizens organized a tribute to Guthrie in 1991. Overcoming local opposition and the claim that “Woody Guthrie was an atheist and a Communist,” supporters put a stake in the ground. “Woody Guthrie put Pampa on the map; it is time for Pampa to acknowledge him,” reads the in-house account of the Woody Guthrie Folk Music Center

The city held its first concert in Guthrie’s honor the following October, on the 25th anniversary of the folk singer’s death. Guthrie family members attended. Texas Route 60 across the Panhandle was designated the Woody Guthrie Memorial Highway, and Texas Gov. Ann Richards proclaimed Oct. 3, 1992, “Woody Guthrie Day” throughout the state.

By 1997 the event had grown, and Guthrie’s son Arlo, a folk-rock icon of the 1960s, headlined. Guthrie’s hometown of Okemah began to embrace the musical heritage of their native son that year as well, launching its folk festival that same year.

Eventually, as a new century rolled around, the Pampa group conceived of a Woody Guthrie Folk Music Center and purchased the old Harris Drug Store in 2000 to house it. Big names such as Pete Seeger and Jimmy LaFave hopped on the bandwagon, coming to Pampa to perform and to keep the Guthrie legacy alive. In 2009 Mike Sinks, a talented guitarist in his own right, joined the nonprofit enterprise, assisting in curating exhibits and partici- pating in a Friday night folk jam that has become a weekly institution.

This October, visitors have the opportunity to enjoy the 27th annual Tribute to Woody Guthrie, Saturday, Oct. 5, at Pampa’s Civic Center, with old-time music provided by the Fossil River Band, and a barbecue dinner to boot. It’ll be a great evening for “This Land Is Your Land” and other standards, and perhaps a few numbers that deserve to be revived as well.

Of course, thanks to the good folks at the Woody Guthrie Folk Music Center, Guthrie’s spirit lives on year-round. Today the Harris Drug Store building also serves as a visitor center for Pampa, sharing information about other points of interest and culture in the area.

The jam session starts promptly at 6:30 on Friday evenings, so bring your guitar tuned up and a song or two ready to sing. An appreciative audience always shows up, and the more senior regulars are kind to newcomers. The museum walls are rich with Guthrie images and stories, and the drugstore counter’s still there. Not to mention that you can acquire one of numerous those handsome T-shirts.