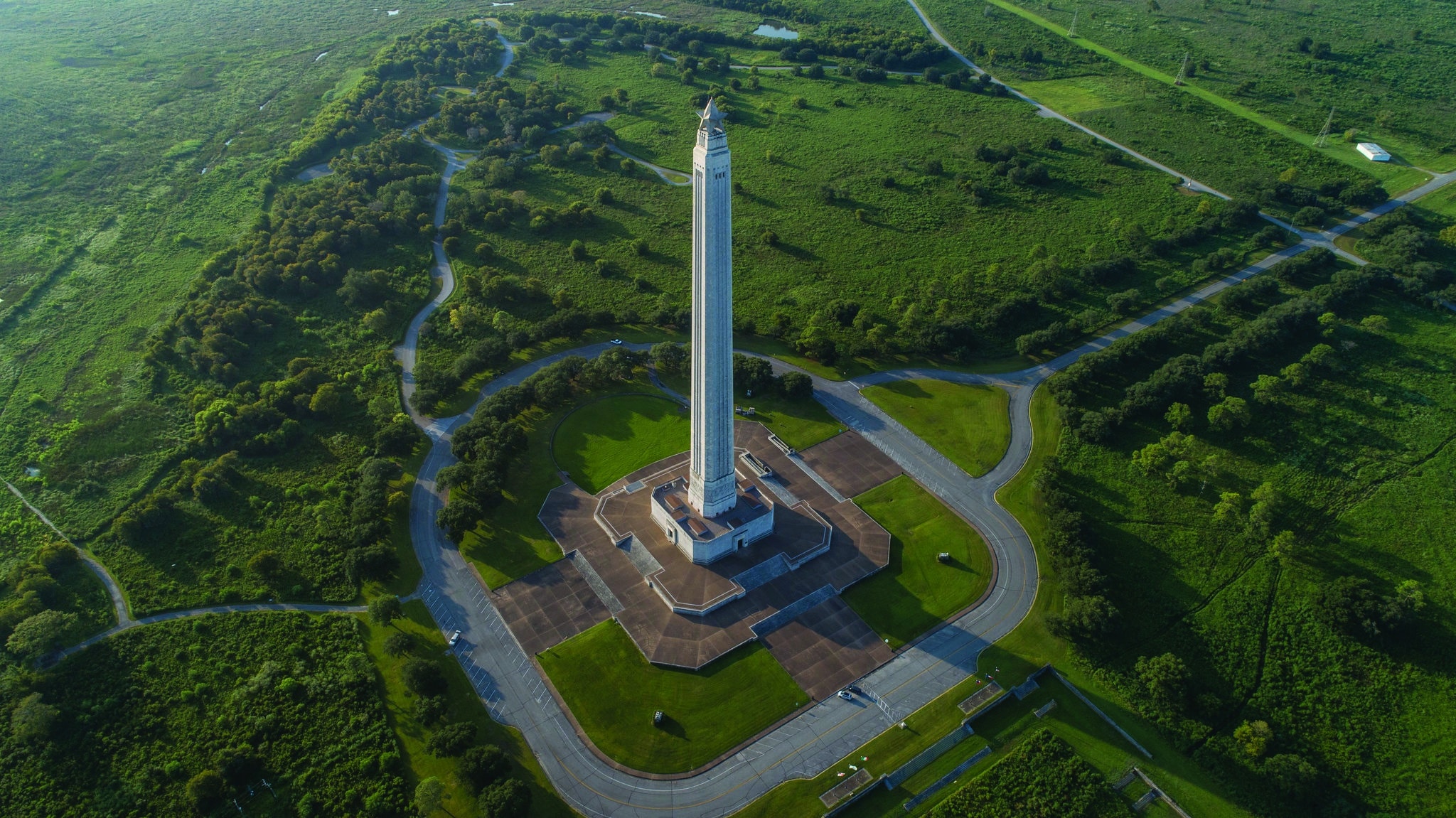 The San Jacinto Monument is a towering tribute to a spectacular military triumph. The Battle of San Jacinto was a landmark in Texas history, an unexpected victory by a revolutionary army of citizen-soldiers in retreat who abruptly turned on their pursuers. Regular soldiers commanded by a president-general who styled himself the “Napoleon of the West” were routed by a ragtag militia led by General Sam Houston. With Texas independence thus seized on the field of San Jacinto, it was almost inevitable that a suitably awe-inspiring commemoration would be erected on that same field.

The spring of 1836 was a desperate time for Texas settlers. Since October 1835 there had been armed clashed between “Texians” and the forces of Antonio Lopez de Santa Anna, the dictatorial presidente of Mexico. A Declaration of Independence was signed on March 2, 1836, and Sam Houston affixed his bold signature – by a historical coincidence – on his 43rd birthday. Houston was a former U.S. congressman and governor of Tennessee. He had been a commissioned officer in the U.S. Army for five years, was thrice wounded at the Battle of Horseshoe Bend, and served as major general of the Tennessee State Militia.

With his background and formidable presence, Houston was appointed major general of the Texas Army. But on March 6 the Alamo fell to Santa Anna, and every man in the garrison was slain. Three weeks later at Goliad, nearly 400 Texian prisoners were executed on the orders of Santa Anna. He launched his army eastward toward the population of Anglo settlers, who fled toward Louisiana. The “Runaway Scrape” was made worse by incessant rains that flooded every stream.

The volunteers collected by Houston represented the only hope for revolutionary Texas. He found 374 men camped in Gonzales, hoping that someone would lead them to the relief of the Alamo. But the very day of Houston’s arrival, word came of the disaster at the Alamo and that Santa Anna was on the march. Houston had no intention of fighting a large army of regulars with his untrained volunteers. He ordered a night march to the east, the beginning of a strategic retreat that would last for six weeks. Desertions occurred at the beginning and throughout his evasive march. But Houston issued a call for volunteers, with the promise of land grants from the new government, and Texian men responded by the hundreds.

Twice Houston was able to halt his column: for eight days at Beason’s Ford on the Colorado River and for a fortnight at the plantation of Jared Groce on the Brazos River. On both occasions Houston took the opportunity to drill his men, not for parade ground performance, but to make battlefield soldiers of them. Houston knew it was essential for his raw volunteers to be able to advance in lines and fire by volley and execute other battlefield maneuvers. Houston also formed a company of about 40 mounted “spies,” as scouts were called. This band of hard-riding backwoodsmen provided a steady stream of information flowing into headquarters throughout the campaign.

But Santa Anna became contemptuous of his retreating adversary. He split his advancing army into five divisions, hoping that at least one column would make contact with Houston’s army. Of course, this gave Houston the chance to do battle against a single division of an army of thousands.

In mid-April Santa Anna learned that members of the interim Texas government, who were fleeing the Mexican forces, had paused at Harrisburg. The Napoleon of the West hastened forward with 750 men, only to learn that the officials he hoped to capture already had moved on. Notified by his scouts, Houston pounced. He executed a forced march with 1,000 men and the “Twin Sisters,” two 6-pounders that were a gift from the people of Cincinnati and that recently had reached his little army. Almost 200 men fell out during the final night of the push, but by April 20 Houston was in position to intercept Santa Anna’s column.

The general positioned his men in timber that lined the east bank of Buffalo Bayou. The Twin Sisters were unlimbered and placed at the edge of the oak grove. Early in the afternoon the Mexican column appeared, impressive with uniformed infantry, mounted lancers, and marching music from drums and bugles.

Mexican scouts reported that the Texas Army was in the line of march. Santa Anna positioned his lone artillery piece, a brass 12-pounder, and began to pepper the oak grove with grapeshot. Houston answered with the Twin Sisters, while Col. Sidney Sherman led the “cavalry” – about 60 mounted riflemen – in a probe toward the 12-pounder. But Santa Anna’s lancers charged, and the mounted Texans raced back to cover.

Santa Anna established camp several hundred yards east of the Texian position. Behind his camp was timber and Peggy Lake, surrounded by marsh. To the north was more timber and marsh and the San Jacinto River – all severe impediments to retreat. Santa Anna’s spacious marquee stood in the midst of rows of tents. Fearing that the Texians might launch a dawn attack on April 21, Santa Anna ordered his men to erect a barricade in front of the camp. The soldados spent most of the night arranging supply crates, saddles, and brush into a ramshackle fortification about 5 feet high.

But Houston had stayed up deep into the night discussing the unfamiliar terrain with his scouts, and he slept late. At mid-morning General Martín Perfecto de Cos marched his division of 550 men into Santa Anna’s camp. Now the Mexican soldados outnumbered the Texians.

At noon on April 21 Houston’s senior officers stated their desire to fight on the defensive from the cover of the trees. But Houston knew that his men were spoiling for a fight and that company after company had voted to attack. He ordered an assault for mid-afternoon. By that time of day Santa Anna was convinced there would be no Texian attack until the next morning. Santa Anna’s men had worked through the night on the barricade, while the soldados of Cos had marched all night. The Mexican camp settled down for a siesta.

Houston, astride a white stallion named Saracen, marched his men in columns up the grassy rise toward the enemy camp. Halfway to the camp the columns deployed into a line of battle 900 yards wide and two ranks deep. The drilling during the strategic retreat now paid off.

Mexican sentries at last opened fire, and some of the Texians shot back. Houston shouted for a volley, and the attackers fired in unison at close range. Brigadier General Manuel Fernández Castrìllon was killed. Also killed or wounded were nine Mexican colonels, five lieutenant colonels, two majors, 12 captains, and 13 lieutenants. Leaderless soldados became a disorganized rabble.

The Texians charged with a furious battle cry: “Remember the Alamo!”  With no time to reload, the Texians clubbed their rifles and wielded Bowie knives. The Twin Sisters blasted apart the flimsy barricade. “The conflict in the breastwork lasted but a few moments,” reported Houston, “. . . our riflemen used their pieces as war-clubs, breaking many of them off at the breach.”

The Mexican encampment was seized in less than 20 minutes, but slaughter went on for an hour. Houston and several of his officers tried to halt the killing, but the men were filled with pent-up blood lust. Santa Anna, viewing the collapse of his army, mounted his horse and galloped off to the south.

Eight Texians died and about two dozen were wounded, including Houston, whose ankle was shattered by a copper ball. Houston reported 630 Mexican dead and 730 captives, including 208 wounded. About 1,100 Mexican weapons, hundreds of horses and mules, and nearly $12,000 in silver were seized. Houston ordered the money distributed among his men, the only payment the soldiers would receive aside from land grants.

Santa Anna was captured the next day. To avoid lynching he signed a disastrous treaty, acknowledging the independence of the Republic of Texas, granting enormous territorial concessions, and ordering all Mexican troops to march back into Mexico. Houston, often called “Old Sam Jacinto,” was elected president of the fledgling Republic of Texas. He later served as U.S. senator and governor of the Lone Star State.

Such a triumphant feat of arms demanded commemoration. In 1856, 20 years after the famous battle, lobbying efforts at the state legislature were unsuccessful. During the 1890s the Texas Veterans Association and the newly organized Daughters of the Republic of Texas (DRT) lobbied further. The battle area was surveyed and purchased, and the San Jacinto Battleground became a new state park in 1897. Although the Texas Veterans Association disbanded in 1907, the DRT exerted unrelenting pressure to erect a suitable monument.

Jesse H. Jones was a successful builder who was responsible for a majority of the big buildings in downtown Houston. He agreed to serve as chairman of the 1936 Texas Centennial Celebrations, and a San Jacinto Monument became a major part of his vision. The design was created by architect Alfred C. Finn, along with engineer Robert J. Cummins, who had to solve problems posed by a base with a high-water table. Deservedly, the monument was designated a Historic Civil Engineering Landmark in 1992. W.S. Bellows Construction erected the monument.

Fittingly, construction commenced on the centennial date of the battle, April 21, 1936, and the cornerstone was laid exactly one year later. On April 21, 1939, Jesse Jones and Andrew Jackson Houston, sole surviving son of “Old Sam Jacinto,” dedicated the monument. Funding for the $1.5 million project was provided by the Texas State Legislature and the U.S. Congress. A nonprofit organization, the San Jacinto Museum of History Association, has operated the monument and museum since the beginning.

The San Jacinto Monument stands just over 567 feet tall, almost 13 feet higher than the Washington Monument. Listed as a National Historical Landmark, it is the tallest masonry column in the world. The base of the column is 48 feet square, narrowing to 30 feet square at the observation deck. The octagonal column is topped by a 220-ton, 34-foot high star, emblematic of the Texas Lone Star. In 1990 the base of the monument was renovated to accommodate the San Jacinto Museum of History and the 160-seat Jesse H. Jones Theatre for Texas Studies. On the west side a reflecting pool, 200 feet wide by 1,750 feet long, mirrors the entire column. The San Jacinto Monument is a Texas-sized tribute to a monumental victory by Texas patriots.

Join thousands of proud Texans celebrating victory at San Jacinto and Texas Independence. This is a family-friendly Texas-size festival with music, games, demonstrations, food trucks and lots of history. Volunteers dressed in the period of the Texas Revolution make the events of April 1836 come alive.

Historical reenactments and demonstrations are held throughout the day that are sure to thrill adults and children alike. Explore the Texan and Mexican camps and talk with reenactors who will share the true tales of the day.

Bill O'Neal is the author of more than 40 books, and he served a six-year tenure as State Historian of Texas (2012-2018). A high point of his term as state historian was delivering the keynote address at the 2014 anniversary of the Battle of San Jacinto before an audience of 400 with re-enactors and descendants, including Sam Houston IV. A year later Bill was privileged to present the dinner speech at the annual April 21 banquet of the San Jacinto Museum of History Association. One of Bill's books is "Sam Houston, A Study in Leadership", published by Eakin Press in 2016.