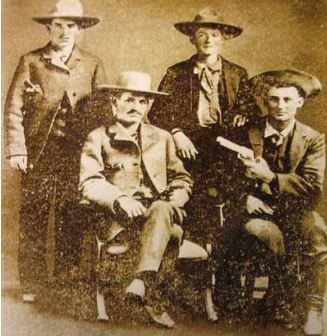 On a desolate stretch of highway, some 75 miles southeast of Fort Stockton, a lonely Texas Historical Commission marker tells the story of a violent attempted train heist that occurred nearby. Known as the Baxter’s Curve Train Robbery, the tragic event occurred in the early hours of March 13, 1912, when Ole Hobek and Ben Kilpatrick, a former sidekick of Butch Cassidy and the Sundance Kid, attempted one of the last major train robberies in West Texas.

The two outlaws boarded the Galveston, Harrisburg and San Antonio Railway train when it stopped at Dryden on the way to El Paso. They ordered the engineer onto Baxter’s Curve, a sharp bend in the railway’s rail bed. The baggage cars were uncoupled from the coaches, but while the two searched for valuables, Wells Fargo express manager David Trousdale bludgeoned one with an ice mallet and killed the other with the first robber’s rifle. Kilpatrick and Hobek were buried in nearby Sanderson, and Trousdale was recognized and rewarded for his bravery.

“There’s an interesting story imparted with this train robbery,” explains Bob Brinkman, the THC’s Historical Marker program coordinator. “Trousdale apparently grabbed the fateful mallet from a shipment of oysters that were packed in ice. After performing the heroic deed, he was rewarded by misters Wells and Fargo with a shiny gold watch.” Texas’ train-robbing era lasted roughly from 1878 to 1920, when much of the state’s commerce was conducted via rail. Express cars, mail cars and passengers were often relieved of their fortunes under threat of guns or dynamite. Most of the robbers got away scot-free.

One of these incidents occurred just north of Austin in May 1887. According to a Williamson County Historical Commission report, bullets began flying when a train stopped for a rail-line switch in the small community of McNeil. The report cites an Austin Daily Statesman article claiming that the robbery gang’s leader — a tall, slender man with light whiskers that looked in the dim light to be a false beard — ordered the door to be broken down.

After bursting onto the train, the robbers struck the express manager on the head and ordered him to hand over all the cash and postal registers. “The men who held us under cover chatted with us pretty freely, talking about how much they expected to get,” the Statesman quoted a railroad official as saying. “One of them asked me for a chew of tobacco, and made me give him my hat, saying he’d lost his own.”

Williamson County is also associated with the notorious outlaw Sam Bass, who was killed in Round Rock on July 21, 1878, by a member of the Texas Rangers. Bass and his gang were feared for their rash of train robberies across the Plains states and Texas.

The first to occur in the state was north of Dallas on Feb. 22, 1878, in the community of Allen. According to historical accounts, Bass and his gang pillaged the entire train, and the brazen robbery startled the community. Allen was likely targeted due to its recent growth as a railroad town and proximity to the gang’s hideout in the Elm Trinity brush lands.

In nearby Mesquite, a THC marker notes the location of another Bass-associated train robbery. Bass and his associates held up a Texas & Pacific train on April 10, 1878, netting $152 while missing a hidden shipment of $30,000.

“Bass was undoubtedly one of the most feared outlaws of the time, and the mere threat of his arrival rattled many Texans,” Brinkman says. “Thankfully, the era of bandana-clad bandits is now a century behind us.”