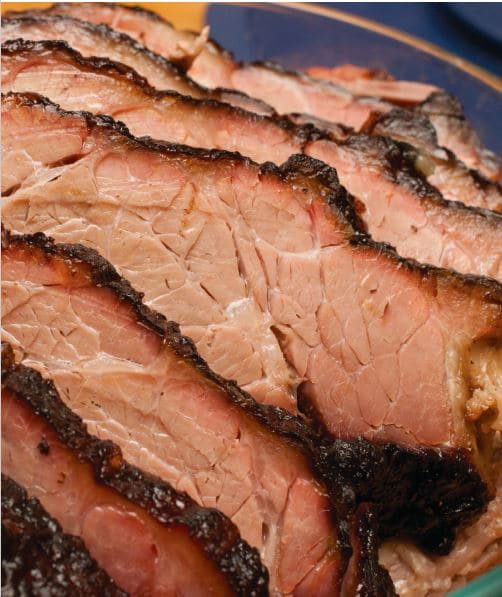 Along for the Rides

Who among us hasn’t been stopped in our tracks on a midsummer afternoon when the aroma of sweet smoke wafting from an outdoor grill harkens us back to bygone days — whether those memories date back to cowboy-camp cooking on the prairie or to a suburban patio?

The art of creating the perfectly barbecued beef brisket attracts a demographic diversity as big as the state itself — from championship barbecue teams and pit masters with their manly, massive smokers to grandmothers whipping up heirloom marinades in CorningWare to nouvelle-cuisine chefs in Texas’ toniest neighborhoods sculpting the definitive presentation to small-town markets serving a few slices on butcher paper while a smoky crimson liquid oozes through your fingers between bites.

In Texas, brisket is a little bit like politics: everyone has an opinion on the subject. There’s a wide spectrum of ideas on how to prepare, cook and serve the dish. And your position on brisket slicing can be almost as polarizing as politics. In full disclosure, this writer is an against-the-grain advocate. But I get ahead of myself.

There are actually areas in the realm of pursuing brisket perfection where aficionados agree. Most believe a vinegaresque-type marinade is crucial in softening the sinew of the muscle found in the meat and that, ideally, an overnight marinating will achieve that tenderizing while providing flavor as well.

One tenet of brisket preparation that is almost universally accepted is low-and-slow heat — to keep the previously mentioned muscle as tender as possible. Fast cooking makes the meat tough. A temperature of 200 degrees is not unusual for brisket cooking, and roasting or grilling time can be all day. Tightly wrapping the brisket in heavy-duty foil locks in the moisture of the meat.

When the meat is actually done, sauces that accompany the brisket show just how much imagination Texans bring to bear when mixing up concoctions of Worcestershire sauce, ketchup, liquid smoke, mustard and vinegar.

Here’s my mother’s time-honored traditional preparation that requires nothing more complicated than your home oven — and a lot of aluminum foil.