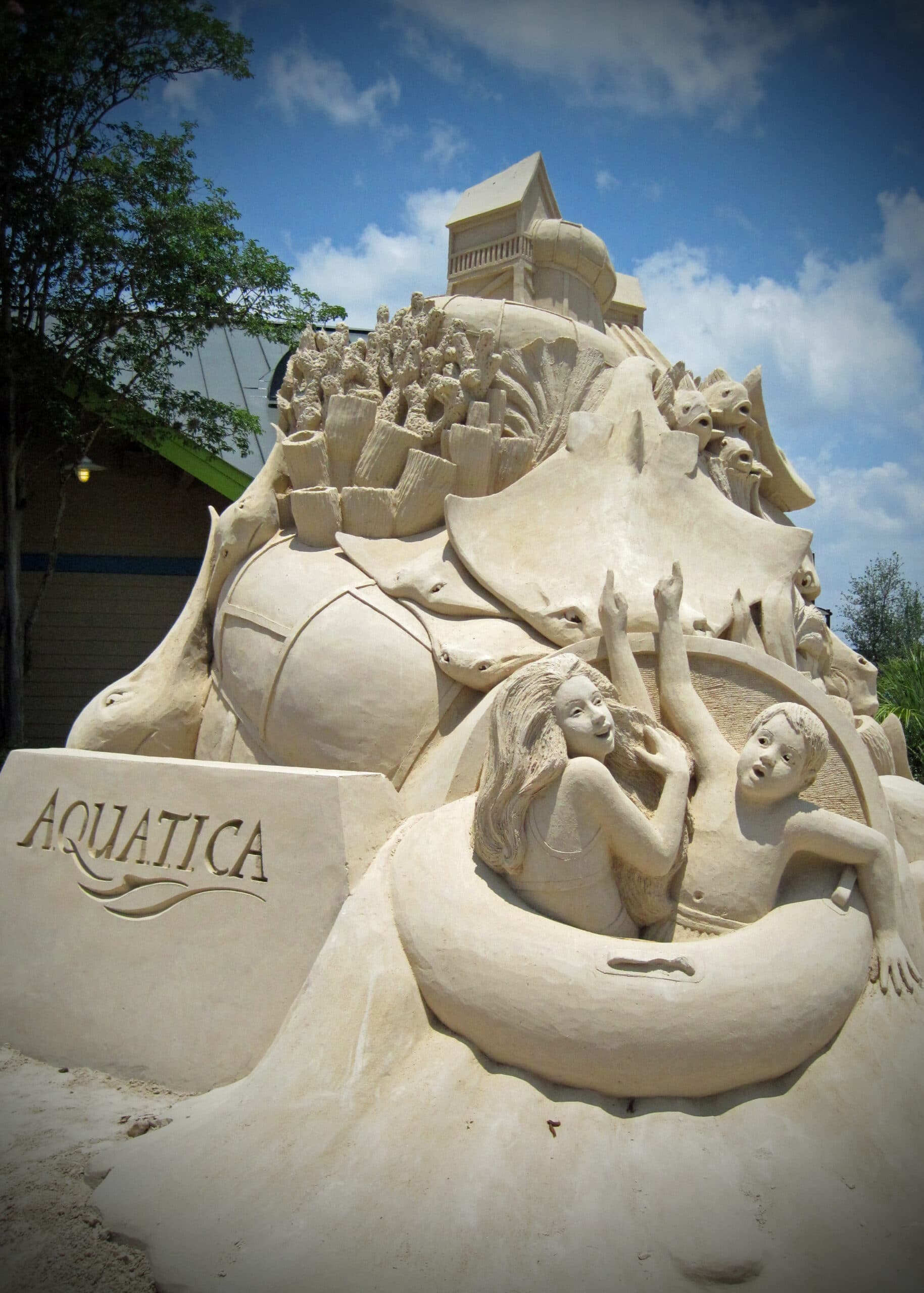 Just Puttin’ a Round

Any dayof the week, regardless of the weather, you can find sand along a Texas beach waiting to become a work of art. In fact, Texas beach sand is considered especially useful for building sandcastles and sculptures.

During Memorial Day weekend in 1999, Mark Landrum discovered sandcastle building. Following a difficult time in his life, his friends took him to South Padre Island (SPI) for a getaway weekend to cheer him up. Landrum’s friends told him he could do anything over the weekend, anything at all, expecting maybe deep-sea fishing or the like. But Landrum saw an ad that caught his eye: he wanted to take sandcastle lessons.

After that first lesson with two sand aficionados, Lucinda “Sandy Feet” Wierenga and Amazin’ Walter, he was hooked. The combination of carving and sculpture were addictive. Amazin’ Walter convinced Landrum to teach sandcastle building in the Mustang and North Padre Island area. He’d been working in computer accounting software, but as the number of sandcastle lessons grew, he turned his passion for building sandcastles into a full-time business.

That was 12 years ago. Now, you can stop by the local souvenir shop and pick from a variety of plastic buckets, shovels and rakes, but Landrum can teach you to transform a pile of sand into a sandcastle using only a small plastic knife, spoon and a slightly modified fork.

He shares the techniques of professional sand sculptors from all over the world, drawing from his winning experiences in competitions, both individually or teamed with other sand sculptors — called “duos” — like Mark Flynn, Jon Woodworth and others with unique names, like Sandcastle Kenny.

Spending the day with Landrum on the beach, you learn more than just how to build sandcastles. He employs a quick wit while explaining archer windows, staircases, rise and slope. He explains that water pulls sand tighter together, as he pats the water away to harden the sand into usable pancakes. And he adds Texas traits to his lessons, from making Texas snowballs to adding pleas from the sandcastle balcony by Corpus Christi Juliet: “Romeo, Romeo, wherefore art thou Romeo? Please bring me a Whataburger!”

Besides individual lessons for small groups and larger team-building events, local condos and resorts like Port Royal and Cinnamon Shore bring the “Sandcastle Guy” back regularly to teach groups of visitors and guests. Many kids at Cinnamon Shore look forward to the Sandcastle Guy, and “regulars” wait to ask him about their projects.

Landrum creates sand sculptures on the beach for marriage proposals, weddings and corporate logos. Besides sandcastles, he teaches sculpting sea turtles and other designs that students imagine, such as rocket ships and even the Statue of Liberty. The bowlegged men with big shoes found on the beach are his trademarks. He recently created a group of six men, titled “We met on the beach, and the 1st topic was shoes!” November snowmen are another Sandcastle Guy trademark.

Since Landrum serves as a board member, he can’t compete in the Texas SandFest any longer, though he did carve the welcome sign into a berm. The event, held in April, draws over 100,000 people to Port Aransas and has donated more than $500,000 to the community over the last six years. In 2017, for example, SandFest awarded more than $200,000 to the Port Aransas Art Center, Port Aransas Community Theatre, Helping Hands Food Pantry and for high school scholarships.

Over the past several years, beginning in September, Landrum helps an off-campus sand sculpting club of high school students. The students hone their skills in design and sculptures through October and November, building Scream characters and snowmen. In December and January, the students design and plan for the Texas SandFest, practicing their designs through March. Landrum refrains from participating in any of the carving and allows the students to design and plan their own sculptures.

In addition to the Texas SandFest, Landrum supports the Sand Pumpkin Patch held by the Port Aransas Parks and Recreation to benefit local food banks and charities. He sculpted a large masterpiece pumpkin with vacant vines, allowing contestants of any age to add their sculpted pumpkin to Landrum’s work.

Before every sandcastle lesson, Landrum asks his students to make this pledge: “I do solemnly swear to: Have Fun, Help Others Have Fun and Unlitter!” He shares a passion for building sandcastles and cleaning the beach with the young and old alike.

Each student leaves the beach lesson with a sea creature souvenir from his treasure chest, litter from the beach and a memory that will last much longer.