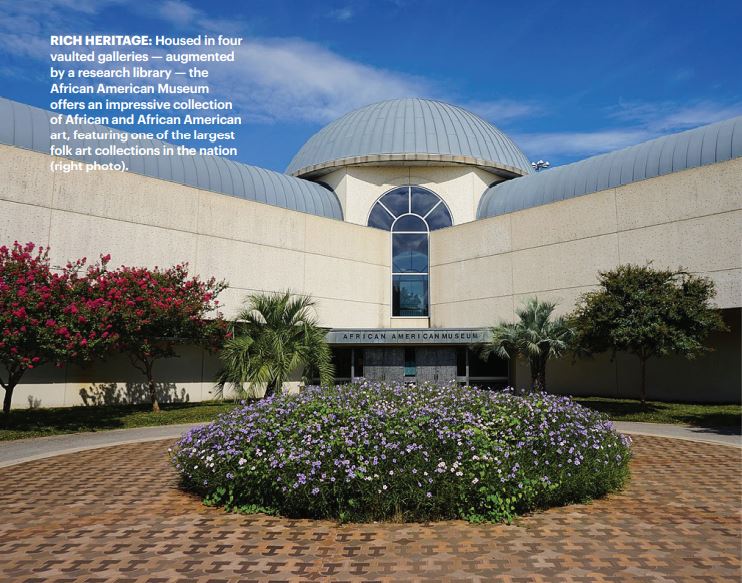 Founded in 1974, the African American Museum is devoted to the preservation and education of African American history, culture and art, focused primarily in the Dallas area. It was originally part of the Special Collections at Bishop College — a historically black college that ceased operations in 1988. Since 1979, the museum has operated independently and is the only museum of its kind in the Southwestern region of the United States, boasting one of the largest African American Folk Art collections in the country.

Facing the Rising Sun: Freedman’s Cemetery is the AAMD’s permanent exhibition that puts on display the harsh reality of the adversities that the African American community confronted in the face of racism and segregation after the Emancipation Proclamation brought an end to slavery. The establishment of Freedmantown, now known as North Dallas, was forged despite the obstacles and hardships that the community faced. Artifacts from Freedmantown, photographs and historical accounts are on display to educate the public. Along with the exhibit, visitors can enjoy a research library where one can hold and study texts from as far back as the early 20th century, an outdoor sculpture area and an indoor Folk and Decorative Art room with numerous pieces created by prominent African American artists as well as pieces constructed by slaves from the early to mid-1800s.

On the day of our visit, Kevin Austin, a mentor at the Dallas nonprofit Mentoring Brother 2 Brother, which provides positive role models to African American male youth, was visiting the museum with a group of young men. “My purpose for bringing these young men here is to expose them to our history, give our respects and pay homage for those who paved the way,” Austin explained. “I want to show them that, no matter the situation, they too can go on to do great things.” With historical documentation of the African American community being more difficult to gather than that of other ethnic groups, the African American Museum is, Austin says, “the best place to come and gain access to the history of the African American community of Dallas after slavery and during the Civil Rights era.”

The free admission provides an opportunity for individuals from all walks of life to not only enjoy a day at the museum, but to immerse themselves in an invaluable educational experience distinct from other museums in this region of the United States.

Next time you head to Dallas, why not take advantage of this establishment — or make a special trip just for the museum itself? The African American Museum offers a wealth of knowledge to visitors who visit, and the significance of the museum makes it a purpose-built and precious gem within the walls of Fair Park.