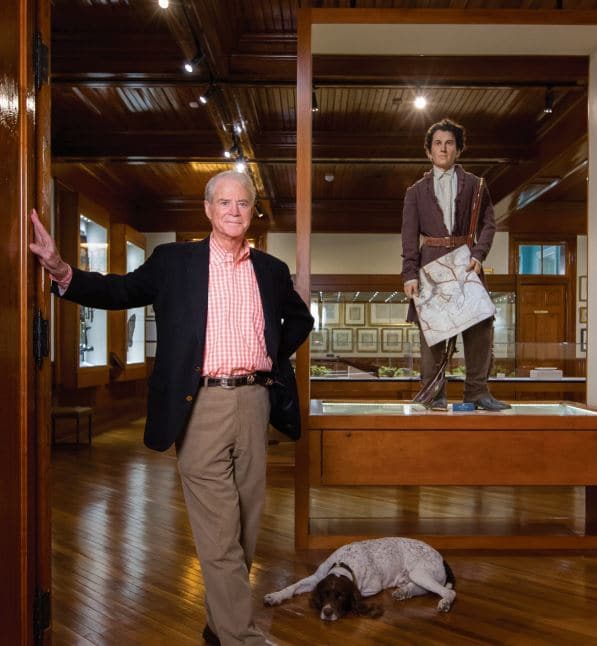 “Come and Take It” Flag

Hundreds of thousands of visitors trek to Texas’ famed Big Bend National Park every year. And for decades, the sleepy town of Marathon, Texas, has served as a popular entryway to the park’s gorgeous mountains and steep canyons.

For the majority of that time, visitors to Marathon, the “census-designated place” at the junction of U.S. Highways 90 and 385, were inclined to not think much of it — beyond, of course, appreciating the sprawling landscapes, dark night skies and unperturbed isolation.

But over the past several years, Marathon has suddenly become a destination — a last bastion of the Wild West … living, breathing history representative of one of the world’s most romanticized periods.

And Texans can largely thank 78-yearold oil baron, philanthropist and collector J.P. Bryan for that.

“My mother said something to me when I was young, and the older I get, the more I’m convinced it’s the way to live your life,” says Bryan, his subtle drawl trailing his baritone rumble. “She said, ‘Son, do the things that serve your interest and not your self-interest.’ I didn’t know what she was talking about at the time, because, frankly, it didn’t seem to be the way she lived her life — but now I know, and never were truer words spoken.”

It’s certainly fortuitous for the Lone Star State, then, that this sixth-generation Texan’s lifelong love interest (outside of his wife, Mary Jon, of course) is and always has been preserving and celebrating the history of the state and the American West.

A serial entrepreneur who built a fortune throughout his 40-year career in the energy sector, Bryan founded and ran Torch Energy Advisors after a stint in investment banking. Beginning in 1966 and extending through his years even as a top executive in oil and gas, Bryan’s first passion was collecting artifacts from the American West.

“I believe that we in Texas share the greatest historical heritage of any state in the Union,” Bryan says, his conviction unwavering — and his knowledge of the subject certainly deep enough to back it up. “And I think the settlement of the West is the greatest single historical event in all of world history.”

To grasp Bryan’s affinity for and knowledge of Texas’ history, you need to understand the context in which it developed. “I grew up in a little town on the Gulf Coast called Freeport,” Bryan says. He spent a great deal of time at his grandparents’ 1800s-era beach house, learning of his family’s dense history in the region. His family tree extends all the way to Stephen F. Austin, who colonized Texas in the 1820s and is considered by many to be the “father” of Texas. Austin’s sister, Emily, was Bryan’s great great-grandmother.

Already with a strong understanding of his lineage, Bryan first attended the University of Texas at Austin to study art history before shifting to a general focus on history under legendary Texas historian H. Bailey Carroll, who directed and coedited the Handbook Of Texas. “Dr. Carroll opened my eyes to the wonders of history,” Bryan says. “He showed me that it’s not just about dates and events but about the people and their conduct, good and bad, and what had been achieved on that stretch of land.”

It’s with that appreciation for the people who made history that Bryan set out to revitalize Marathon. Or at least an appreciation for one specific person initially — Henry Trost, the famed El Paso architect whose unique designs define cities across the Southwest, from Austin to Phoenix.

In the late 1970s, Bryan had been looking for a place near Big Bend that was a little closer to his family’s Houston home than their 15,000-acre Chalk Draw ranch, which sits just north of the park and an hour away from Marathon. That’s when he happened upon Marathon’s Gage building, a 1926 Trost-designed structure that once served as a hotel, residence and business hub for San Antonio businessman Alfred Gage (who owned a ranch of more than half a million acres).

Bryan paid $30,000 for the crumbling structure in 1978 without stepping foot inside, which was probably for the best, because it was in such disrepair, Bryan might’ve thought twice about it had he seen its state of dilapidation. Bryan traveled to El Paso to find the original plans for the building.

When my wife and I saw the historical importance of the Gage Hotel that had been designed by Trost, who is, arguably, the best architect who ever called Texas his home, we decided it was worth committing our time to,” Bryan says. Bryan and Mary Jon committed money, too, pouring millions in over the next four decades to build an upscale oasis in the heart of the Wild West.

But that doesn’t mean it wasn’t a struggle. “We didn’t build the hotel with the idea of ‘Build it and they will come,’ because I’d never heard that phrase,” Bryan says, a light chuckle underscoring his tone. “But they didn’t come. Not for a long time.”

Bryan had essentially resigned himself to treating the Marathon project as a charity, buying up and restoring buildings in its proximity along the way with the hopes that the community of fewer than 500 people wouldn’t “dry up and blow away like a tumbleweed.” Soon, other artists migrated to the area, opening galleries and scant but authentic upscale shopping opportunities.

And at some point less than a decade ago, something just clicked. Bryan no longer had to support the hotel financially. Visitors from across the country, itching for a different kind of vacation, heard about the wide open skies of West Texas, and Marathon offered the perfect getaway. Or, as Bryan describes it, the “long view” of the West, with the Great Comanche War Trail only a few hundred yards from the hotel, not to mention Fort Davis and landmarks encompassing the history of the cavalry, Buffalo Soldiers, cattle drives and all that Western romance.

“But the nice thing is, the character of the place hadn’t changed,” Bryan says. “It’s still wide open country; very few billboards, very few signs of development, and still plenty of isolation. Fortunately the country has done more to change all of us than we’ve done to change it.”

That’s a key distinction for Bryan, who’s spent a great deal of his life concerned with the well-being and balance of the environment. “Preservation is progress,” he says. “The worst polluter, the most destructive element in any society, is poverty, and we’re stewards of our environment. If we don’t look after it, it’s going to be destroyed. We need to be prosperous with our assets.”

Nearly 600 miles east of the Gage Hotel, in Galveston, Bryan puts his money where his mouth is, as more than 70,000 artifacts from the American West sit on display in the Bryan Museum, a renovated 19th-century orphanage. The museum presents the largest collection of “Texana” (artifacts relating to the culture and heritage of Texas) known to man, providing a detailed and chronological account of Texas and the American West.

And every last bit of it belongs to J.P. Bryan.

So does that make Bryan, who has spent a lifetime collecting and preserving Texas’ history, one of the greats? He laughs. “Well, if I’d been only a collector and not an entrepreneur, I would’ve been a better collector,” he says. “And if I had only been an entrepreneur, I’d probably be a better one of those, too.”

That’s not to say there weren’t missteps along the way. Like buying a forgery of the Texas Declaration of Independence — likely created by one of Bryan’s own in-laws and sold to him by one of his closest friends and former business partners, the infamous (if not notorious) rare book collector John Holmes Jenkins. “I’ve been fooled — don’t misunderstand me,” Bryan says.

“I’ve bought fakes or things I thought were better than they are. But for the most part collecting served me well. I generally back it up with a pretty decent reservoir of appreciation. There are certain things I know a lot about, almost more than anybody who’s ever tried to sell it to me. But you don’t want the seller to know that. You just act like you believe what they’re telling you.”

Bryan’s keen eye and willingness to embrace the gamesmanship of collecting helped him establish an undeniably impressive collection. Along the way he’s hosted it in various places, including his residences, the downtown Torch Energy offices, and the University of Texas’ Harry Ransom Center. Now it’s all on display for the world to see in Galveston.

For Bryan, creating the museum is an exercise in being prosperous with his assets while serving his interests over his self-interest.

“The shortest-lived human emotion is gratitude,” Bryan says. “You’re going down the wrong path if you’re being charitable only because you expect someone to show you gratitude. You’re going to be sorely disappointed.” Bryan speaks honestly, mentioning a handful of his charitable endeavors he’d prefer to keep private for that reason.

“Don’t do something because you think it makes you more noticeable or important but because you believe the cause is more important than you are personally,” he says. For Bryan, that cause is keeping people engaged and excited about history, which he believes sits atop all other educational disciplines in terms of importance.

“We have a lot of doctors come into the museum and say, ‘I like what I’m seeing here, because I never cared much for history growing up,’” Bryan says. “That’s a shame, because if you know the history of medicine, it’s not going to make you a doctor — but it will make you a better one.”

Bryan pauses before emphasizing his point. “Any time you understand the history of your profession, or your world, you have a better perspective on how to react and respond to it,” he says. “It’s not learn and live, it’s live and learn — and we learn from the history that was lived by others.”