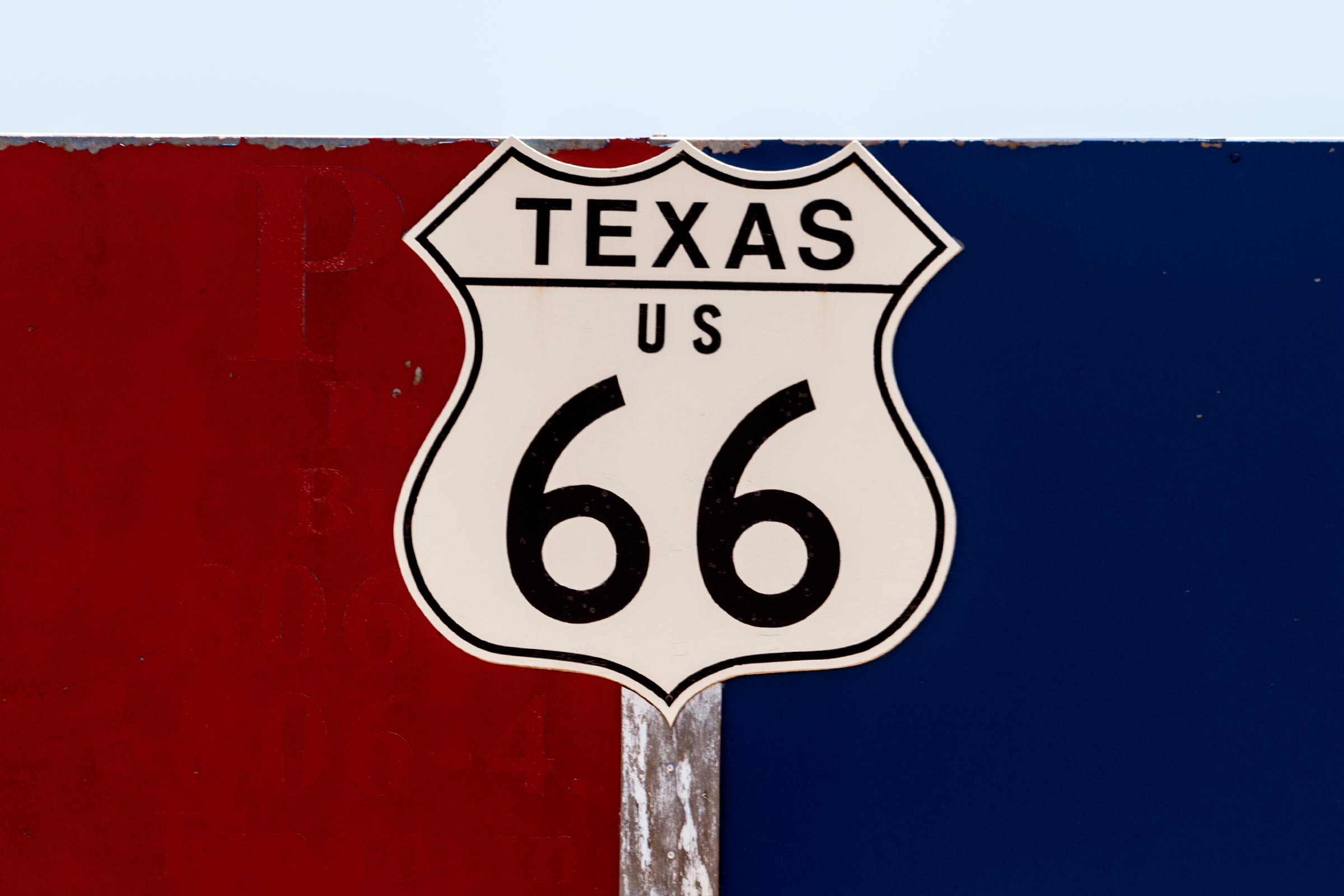 Get Your Motor Running

It’s been a long drive.

You left Grandma’s ten hours ago headed west on Route 66 for a California vacation. The AM radio has been a series of faint small-town stations interspersed with long periods of static. The license plate game lost its appeal back in Oklahoma. The Country Squire’s “4×60” air conditioning has left everyone frazzled, dry and a bit warm. Finally, out on the horizon are the distant lights of a road-culture oasis.

One more time the kids ask, “Are we there yet?”

The distant lights are Amarillo, Texas. Soon you pull up to your motel door, shoo the kids off to the pool, unload the car and stake out a place for dinner. It’s back on the road early in the morning for you and countless other 1950s and 1960s road warriors.

Historic road culture landmarks remain from when life seemed more carefree. They are worth a stop to break up our penchant for itineraries and schedules.

On Amarillo’s east side, Route 66 passes the 4500 block of East Amarillo Boulevard, the original location of the Big Texan Steak Ranch. The Texan brags “Son, we fed your father and grandfather.” It’s most likely true: people from around the world have been stopping for sixty years. Find the billboard-famous eatery at 7701 E. Interstate 40.

On the far west side Route 66 takes you within a Dak Prescott stone’s throw of Cadillac Ranch (which will turn fifty in 2024). More than 1.4 million people visit annually, many leaving their spray-paint tag on the aging but colorful nose-down Cadillacs.

Don’t miss the middle, particularly along Sixth Avenue between Georgia and Western Streets, the historic San Jacinto neighborhood once linked by streetcar to downtown Amarillo. Check out the Golden Light Café, one of the oldest continuously operating restaurants on the entire route. The Nat, a swimming pool–turned–ballroom that once hosted all the big bands, today houses more than 20,000 square feet of antiques, art and collectibles. The Handle Bar and Grill and Bracero’s serve great food from converted gas stations. “Cadillite” jewelry (made from polished chips off the above-mentioned spray-paint layers) is created at the Lile Art Gallery. New is the I Am Rt 66 Gallery and Visitor Center in the remodeled Myers Drumstick Restaurant, an Amarillo landmark since the 1950s. Or just stroll the sidewalk and imagine the hustle when thousands of vehicles a day made this the road from Chicago to L.A.

Every Saturday evening this summer enjoy Amarillo’s Route 66 Cruise along the entire length of Sixth Avenue between Georgia and Western.

Plan a brief detour from Route 66 to catch two cathedrals to Amarillo’s road culture. The RV Museum on Interstate 27 just a couple miles south of Interstate 40 is a personal collection of vintage recreational vehicles and campers, some gnarly motorcycles, and even a classic Chris-Craft speedboat. Just drive into Sisemore Traveland, walk into the dealership, and say “I want to see the museum.” Staff will show you across the back lot and let you spend as long as you want. Don’t miss America’s oldest Airstream trailer: in the 1930s you ordered plans from the company and built your own. Collectors Jack or Trent Sisemore might drop by, unless they’re enjoying life on the road. Best yet, it’s free.

Just a few miles away on Washington Street is Bill’s Backyard Classics, a couple of anonymous buildings stuffed with more than 100 pristine cars from the ’30’s through the ’60’s. Collector Bill Pratt has always been a car guy. When he retired it became a passion he shares with everyone. Highlights include Bob Seger’s 1961 Pontiac Catalina and the 1956 Cadillac Fleetwood limousine owned by Judge Roy Hofheinz, the man responsible for building the Astrodome. Fins are plentiful. Each visitor will have a personal favorite. All this nostalgia is just $10 for adults; children 12 and under are free.

Amarillo’s road culture rolls on today, with an average 67,000 cars and trucks streaming by the downtown intersection on Interstate 40 every day. But its heyday was when Route 66 was the way west. Slow down, enjoy the journey, and get a feel for the Mother Road.