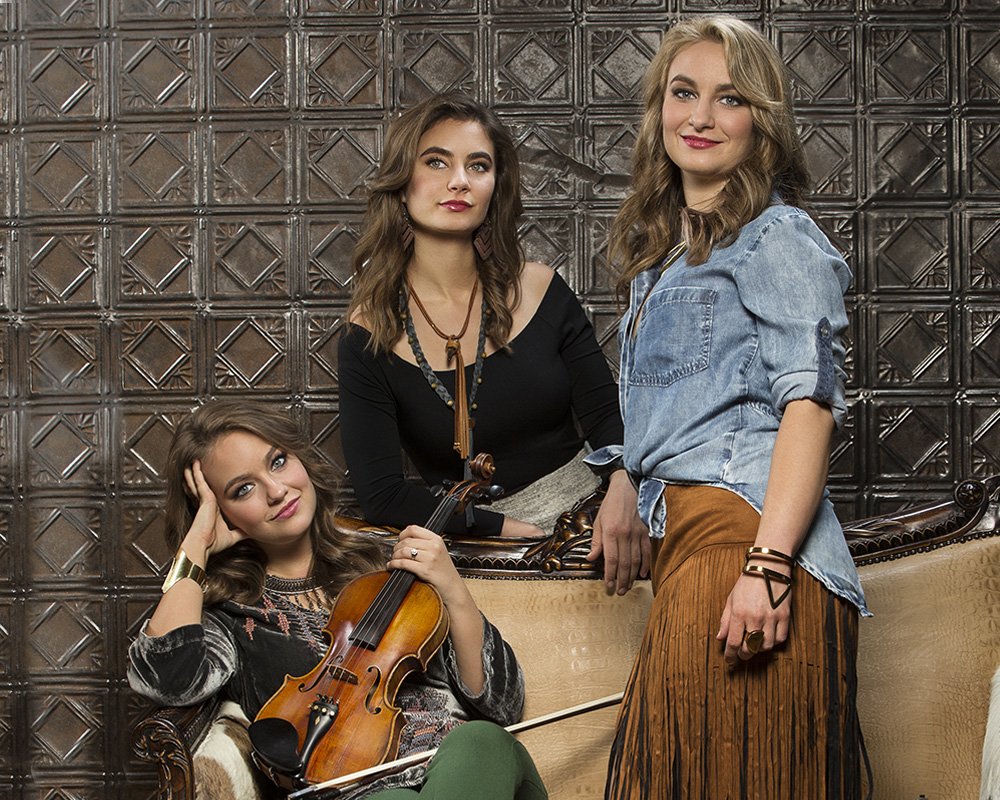 Though only 14 years old at the time, Grace Quebe distinctly remembers the reaction she and her sisters would evoke when taking the stage. “We possessed this ‘wow’ factor,” she explains. “Audiences would see three little girls carrying fiddles and think ‘Oh this is going to be adorable.’” In the audience’s defense, the Quebe Sisters were quite a sight to behold. Dwarfed by their adult backing band, Hulda, Sophia and Grace Quebe — ages 9, 12 and 14, respectively — seemed more likely a novelty act than a serious Western swing outfit. “It’d be an absolute shock for these audiences when we’d start playing.”

To dub the young Quebes’ musicianship a shock is putting it lightly. Since first taking the stage in 2000, this trio of Fort Worth natives has forged their rightful place among Texas’ musical acts. Playing a large repertoire of fiddle-driven, nostalgic Western standards, the young sisters have received praise for keeping the tradition of Western swing — the Official State Music of Texas popularized by Bob Wills — alive in the 21st century. “You rarely see triple fiddlers playing at that caliber,” says Asleep at the Wheel frontman and frequent Quebe collaborator Ray Benson. “Even rarer is a fiddler who’s able to sing the way they do.” With other Texas musicians sharing Benson’s sentiment, it didn’t take long for the Quebe sisters’ band to rise to prominence. Even at their young ages, the sisters were sharing stages with Willie Nelson, George Strait and Riders in the Sky. “It’s crazy to think how long we’ve been playing together,” Hulda says. “The band has really been the only job the three of us have ever had.”

With hundreds of shows and three albums under their belt, the sisters — now in their late twenties and early thirties — continue to tour under the Quebe name. Although their days as child prodigies are behind them, the sisters haven’t slowed down. “If anything, I think we’re touring more now than we ever have,” Sophia says. “With every show we’re finding new ways to challenge ourselves and mature as players.” While the band’s basic setup — three fiddles backed by guitar and stand-up bass — has remained static through the years, that’s not to say their sound has. Looking to break free of their vintage Western swing image, the sisters have recently taken steps to redefine their sound in a more modern, Americana style. “As a grown child star, you can’t rely on a gimmick, Grace says. “From here on, we’re viewing our music through the lens of, ‘Is this something that’s actually going to be worth listening to when we’re dead and gone?’”

For the Quebes, the quest to come into their own as independent, adult musicians is made only more daunting by the fact that only recently have they taken full creative control of their act. Until 2013, the sisters had been following the lead of their band leader and longtime fiddle instructor, Joey McKenzie. It was McKenzie who’d noticed the potential in the three sisters, and trained them in the vintage Western swing style. “As the one with more experience,” Sophia explains, “Joey was the one picking the sort of tunes we played.” Though forever indebted to Mckenzie’s teachings, the sisters have found their vintage label a tough one to shake. “We’ll read articles trying to pigeonhole us into the nostalgia box,” Hulda says, “which is frustrating because that sort of reputation can limit an artist from playing a major festival like Coachella — if they don’t think you’ll fit into their more modern lineup.” Since parting ways with their mentor and longtime guitar player in 2013, life for the sisters has, understandably, shifted dramatically. “It felt like jumping off a cliff, professionally and creatively,” Hulda says. “Everything is up to us now; this is purely our own creative endeavor. Even though I’ve done this my entire life, the past few years have felt brand new.”

Taking full advantage of their newfound freedom, the sisters have begun making a variety of changes to their act — the most noteworthy being the new angle from which they’re approaching their music. “It’s an intense study of feel, rhythm and emotion,” Hulda adds. “When we were younger, we focused on the technical aspect of performing music, but as we’ve grown we’ve realized it’s really the emotion that defines the craft. That raw feeling is what transcends genres, getting you out of the boxes people want to put you in.”

While years of practice have left their technical skills as honed and polished as can be, the Quebes are now coming to find that conveying new levels of musical emotion is an entirely different ball game. “It’s been a challenge,” Grace allows. “Our rehearsals are now turning into full-on conversations about music. We’ll tape all our shows and listen back. If we find we’re not conveying a certain feeling correctly, we’ll go find a record that does — to get to the core of what about it speaks to listeners.”

In addition to shifting their approach to playing music, the sisters have sought to separate their current work from their past in another important way — by writing and performing their own original songs. Any Quebe fan will understand the true weight of this undertaking; for the majority of their professional lives, the group’s set lists have consisted solely of cover songs (albeit with the Quebes’ own unique arrangements and flair). Leading the band into this uncharted territory is the middle sister, Sophia. “Songwriting has always been an interest,” she explains, “but only recently did I have the courage to put one of my songs out for others to hear.”

Sophia’s first foray into songwriting began when she penned a song for sister Hulda’s wedding day. Though it was intended to be a one-time occurrence, the warm reception the song received convinced Sophia to chase her creative spark. Since then, she’s penned various originals, one of which — a country shuffle titled “My Love, My Life, My Friend” — has found its way onto the Sisters’ live repertoire.

While she and her sisters entertain dreams of becoming songwriters as prolific as their songwriting inspiration, Willie Nelson, Sophia believes the writing process is one best undertaken carefully. “It’d be such a milestone for us to one day have an entire album of originals,” she says. “Realistically, however, we might have to work into that over the course of several albums.” For now, the Quebes are content to take baby steps into the songwriting world. “It’s like when we first transitioned from a wholly instrumental band into a vocal group — we didn’t start right away,” Grace says. “In the same vein, we’ll work at creating original music, though I anticipate we’ll have one or two on our next album.”

The sisters may be moving into exciting new musical directions, but that’s not to say they’re abandoning their roots. In fact, as they define their sound, the band is finding inventive ways to stay true to the spirit of Western swing. “We’ve been working on a lot of different styles lately,” Hulda says. “We’ve been leaning toward jazz, but also exploring styles from singer-songwriters, acoustic and even modern artists like Bon Iver.”

While this may seem like a departure from the traditional Western swing standards that once defined the Quebes, it’s important to keep in mind the genre’s roots. “Western swing, as it’s known today, got its start with genre pioneers like Bob Wills,” explains legendary Nashville-based booking agent Paul Lohr. “Those guys weren’t sticking within stylistic boundaries … they were incorporating the fresh, new blues and jazz sounds of their day with Texas-style fiddling and — voila! — Western swing was born.” Grace believes the sisters can do that as well, “but in a more modern sense.” Aiming to use their classic three-fiddle sound to progress the Western swing genre under the Americana umbrella, the Quebes have fittingly dubbed their new sound progressive swing. “To us, preserving the tradition of Western swing isn’t about keeping something from the past alive like a relic,” Grace says. “Western swing has always been about innovation.”

The Quebes have come a long way since making their debut in 2000. With the sisters planning to hit the studio this fall, it’s anybody’s guess what shape their fourth album will take. “Recording each of our albums has been a learning curve, and this one will be no exception,” Hulda says. “Right now we’re going through an evolution. Our sound has undoubtedly matured, and we’re trying to define what that sound is.” Only one thing seems certain: the sisters’ new album will provide an intimate snapshot of three veteran musicians playing at the top of their game as their full creative potential becomes realized.