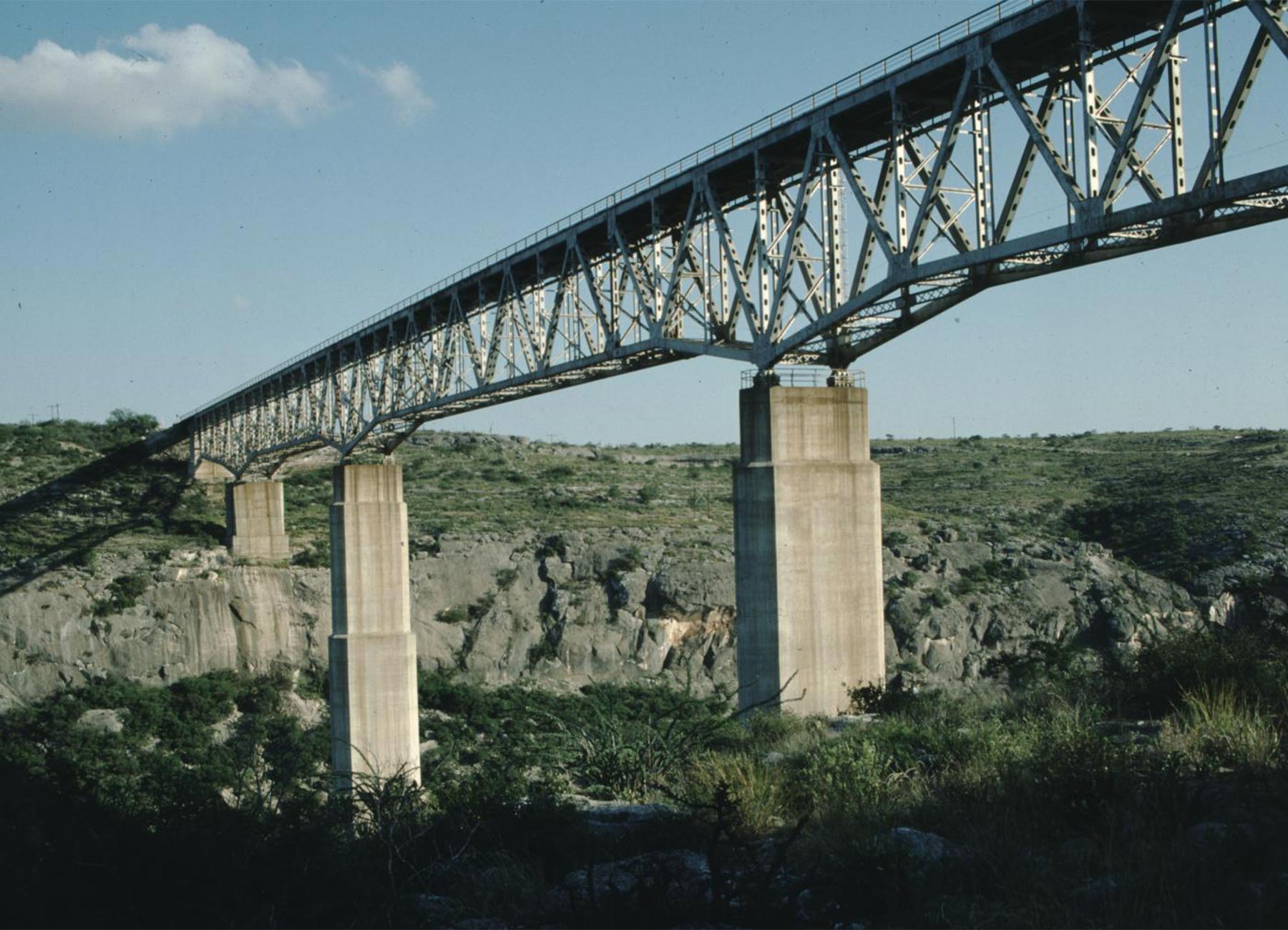 Driving up U.S. Highway 90 from Del Rio, in the desert reaches of West Texas, who would imagine the sight of the Pecos River and the Pecos High Bridge appearing suddenly in view? Soaring 322 feet above the water, the High Bridge is the tallest railroad bridge in Texas.

On the remote stretch of two-lane south from Comstock to Langtry travelers will come upon a great surprise and photo opportunity. For a better view of both the highway bridge and the railroad trestle, there is a TxDOT picnic area just south of the bridge on the west side of the road.

River of lore and legend

The Pecos River, a major tributary for the Rio Grande, traverses  New Mexico into Texas. It forms the border between many of the counties in West Texas, crossing  through Loving, Reeves, Ward, Pecos, Crane, Crockett and Terrell Counties before entering Val Verde County. For most of its 900-mile course the Pecos parallels the Rio Grande, but in Val Verde County it angles across the county to the mouth of the Rio Grande in the Amistad Reservoir. The total drainage of the river in New Mexico and Texas is about 44,000 square miles.

The early settlers along the Pecos River were the Pecos Pueblo Indians. The name Pecos first appeared in Juan de Oñate’s reports concerning the Indian pueblo of Cicuye, now known as the Pecos Pueblo. Early travelers described the river to be 65 to 100 feet wide and seven to ten feet deep, with a fast current. It was crossable in only a few places; the most storied of these was the Horsehead Crossing, so named for the carcasses of the many thirst-crazed beasts who rushed headlong into the stream only to become trapped or poisoned.

In the early years the upper section of the Pecos provided irrigation for crops, turning the desert into rich fields for vegetables and melons.. In 1936 a hydroelectric power plant made it possible for the lower valley to use the river for irrigation as well.

The Pecos has figured in many tall tales over the years. Fans of frontier lore have heard the phrase “West of the Pecos,” is the region where the Wild West is said to have begun. The land produced the legendary Judge Roy Bean and the fabled Pecos Bill. It was also a haven for outlaws following the Civil War. The term “pecos” even came to denote the practice of  killing someone and rolling the body down into the river. And it’s even said there’s treasure—outlaw hoards, Mexican gold, and money from the Butterfield Stagecoach robberies—buried along the river.

The coming of the railroad

Although Fort Stockton and its outpost, Fort Lancaster, had served for frontier defense in the years before the Civil War, guarding the strategic river crossing on the San Antonio–El Paso Road, the Southern and Pacific Railway in the 1880s truly opened the region to Anglo settlement.

A Medal of Honor fight took place in 1875 near the High Bridge. In April, 1875, Lieutenant John L. Bullis and three Black Seminole Indian Scouts, Sergeant John Ward, Private Pompey Factor, and trumpeter Isaac Payne, left Fort Clark to scout the raiders in the area. They found a trail within a mile of the present-day bridge. They engaged with a party of Comanche Indians with dozens of horses. Outnumbered, the scouts withdrew. Bullis’ horse bolted, leaving him stranded. The scouts took action to rescue him. They all later received medals of honor for their bravery.

The original Pecos Bridge was built for the Southern Pacific Railway lines on the Sunset Route. The first bridge to cross there, completed in 1883, was a low bridge located at the mouth of the Pecos River where it joined the Rio Grande. Trains had to follow a winding route called the Loop Line, which descended southward down steep grades into the canyons of the Rio Grande. It passed through tunnels and deep ledges where rock slides were a hazard.

In 1892 the bridge was moved five miles northward upstream, shortening the rail distance by eleven miles on the route between San Antonio and El Paso. This bridge was built in just eighty-seven working days between November 1891 and February 1892 by the Phoenix Bridge Company of Phoenixville, Pennsylvania. The first train to cross the bridge carried the president of the Southern Pacific Railway, C.P. Huntington, in March 1892.

In its day it was the highest railroad bridge in North America, standing 321 feet above the river, and was 2,180 feet long.

In 1909 and 1910 the structure was reinforced and shortened in length to 1,516 feet. More reinforcements were added in 1929 , but after World War II a new bridge was needed.

The original 1892 bridge was dismantled and sold to highway departments and local governments and is now on private property. The Loop Line can be seen from the Seminole Canyon State Historical Park.

By car you have the opportunity to travel across the Pecos River Highway Bridge. Originally built in 1923 and destroyed by flood waters in 1954, the first highway bridge rose only 50 feet above the river and washed away several times before the bridge was raised to its current height of 273 feet. Completed in 1957, it is the highest highway bridge in Texas.

To this day the Pecos River has a great history and many tall tales are told about it. If you get the chance – travel down the river, hike along the banks or fish in one of many spots where you can tell some of the stories about its greatness.