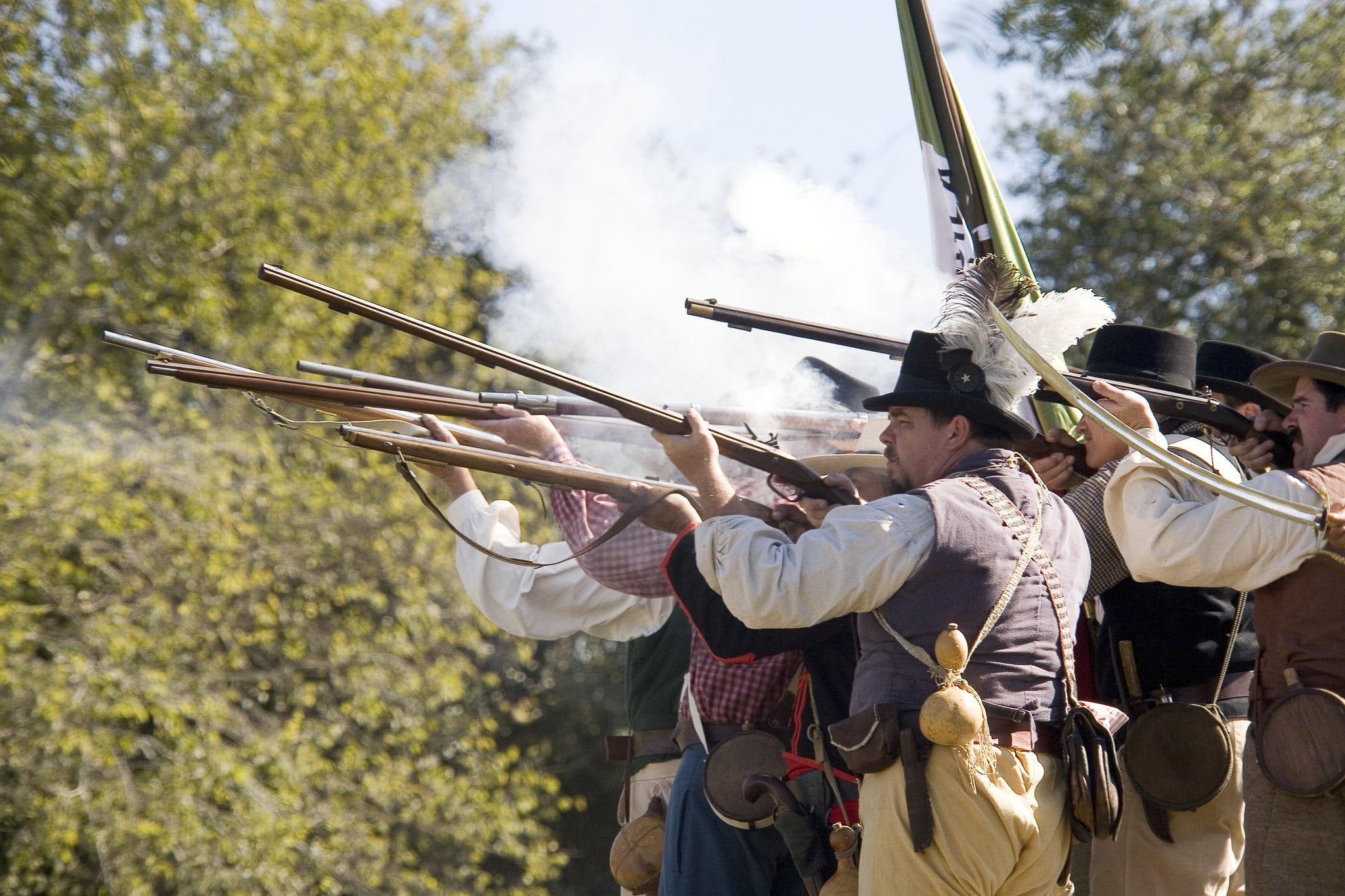 Texas has been squabbled about, claimed and counter-claimed, and even fought over for most of its existence. This means that there are quite a few spots where the action happened. Today, museums, the Texas General Land Office, Texas Historical Commission and Texas Parks and Wildlife all lend a hand in keeping these historical places remembered. Here are a few worth visiting, and why the trip will be worth it.

Starting in South Texas, the important crossing of the Nueces River at Lipantitlan is managed by the Texas Historical Commission and marks the site of a simple earthen fort that at one time housed 100 men and four cannons. Mexican troops built the work in 1831, and Texian revolutionaries took it in 1835. The post served as a convenient camping site for armies crossing the region and was the scene of a second battle, this time in 1842 between Republic of Texas forces and Mexican invaders.

Heading north, stop to see the various attractions at Goliad. Texas Parks and Wildlife operates Mission Espíritu Santo State Historic Site, a restored Spanish mission that was critical to the settlement of South Texas. Read more about Goliad on page 18.

Nearby is the Presidio de La Bahía, critical to the story of Texas. It served as one of the key Spanish outposts in the region and figured in the Mexican War of Independence in 1813-14, and the Texas Revolution in 1835-36. It was here that Col. James Fannin and his 350-man army met their doom in what became known as The Goliad Massacre. Just outside the walls of La Bahía is the birthplace of Ignacio Zaragoza, the hero of the Mexican Battle of Puebla in 1862 — the reason Cinco de Mayo is celebrated.

On March 19, 1836, Mexican forces caught Fannin and his men out in the open as they were retreating from the Presidio La Bahía. In the ensuing Battle of Coleto Creek, Mexican gunners pummeled the Texians with artillery and Mexican lancers cut off all chance of escape. The Texians gave up in exchange for safe passage back to the United States. Instead, a week later, Mexican troops executed the prisoners and burned their bodies. The Texas Historical Commission operates this important battlefield as well as the nearby memorial to the slain.

Leaving South Texas behind, head up to the Hill Country and the National Museum of the Pacific War in Fredericksburg. Why put the nation’s most important museum on the subject in Fredericksburg? Because it was the birthplace of Admiral Chester Nimitz, the architect of Allied victory in the Pacific — even though he grew up and graduated high school in nearby Kerrville before leaving for the navy.

The family hotel originally housed the Nimitz Museum but the story of Chester Nimitz and his victory over the Japanese Empire needed a lot more room. It grew into the world-class National Museum of the Pacific War, complete with the vehicles, aircraft and parts of warships that, in their own way, constituted World War II battlefields as well. The first American victory over Japan, although small, involved the capture of a “midget” submarine that had taken part in the Dec. 7, 1941, attack on Pearl Harbor. That vessel now occupies an important gallery in the museum, complete with sound and light show that tells the story of the opening battle of America’s involvement in WWII. There is a lot to see — plan to spend some time here. There is also a patrol torpedo boat (PT boat) on exhibit and an outdoor amphitheater where battle recreations of the “Island Hopping Campaign” conducted by American forces are played out on scheduled weekends during the year.

Another Texas battlefield can be seen at Sabine Pass Battleground State Historic Site, operated by the Texas Historical Commission. This park is south of Port Arthur and sits beside the busy channel that serves as the outlet of Sabine Lake and the Neches and Sabine rivers as they flow into the Gulf of Mexico. Across the waterway is Louisiana.

During the Civil War, this was strategic ground. Union forces drove Confederates away from a fort built there in the fall of 1862. The Southerners came back in January 1863 and built a better earthwork. That September, a sizable Union landing force of 5,000 troops in a dozen-and-a-half transports, escorted by four gunboats, met a very unlikely defeat at the hands of a few dozen Texans from Houston under the command of Lt. Richard Dowling, an Irish-immigrant and saloon owner. This action prevented a Union occupation of Texas.

Dr. Don Frazier is the director of The Texas Center at Schreiner University in Kerrville, a program that focuses on educational outreach for all things Texas. He is also the author of numerous book on Texas history, and a can be found speaking on Texas topics across the state and nation.