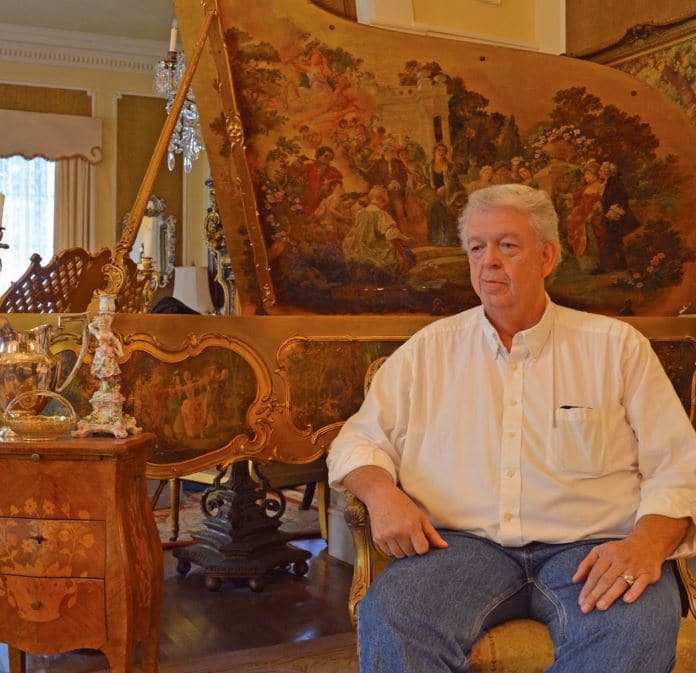 As you walk into the Refugio, Texas, home of Bart Wales, one of the first things you’ll see is a stunningly ornate piano. “That’s a 1905 Steinway grand, one of their art-case designs,” Wales says. The heavy carvings and gold leaf are signature Louis XV style. Just like everything else in Wales’ home, this grand piano has a story behind it. “For a long time, it was in another historic house just down the street, here in Refugio,” Wales explains. “The woman who owned it put it up for sale in Corpus, and I saw it and moved it back home.” The full grand piano is rumored to have been one of Liberace’s, bought by Wales’ neighbors when they were in Las Vegas. “Everything I own is exciting,” he says.

Continuing through Wales’ home, you’ll see the hallways filled with paintings. “Everyone says my house is a museum — my son complains I don’t have a comfortable chair in the whole place,” Wales says. “But it’s my house. It makes Bart happy.” Included in his broad collection is an original Kermit Oliver painting. Raised in Refugio, Oliver is currently the only American artist who’s designed scarves for Hermés Paris.

“Collector” is one of Wales’ many roles, and he admits “there are several Bart Wales you have to look at.” But no matter what hat Wales puts on, he’s always serving Refugio: the town, the history, its people.

Wales’ love for Refugio dragged him into politics in the late 1980s. “I tried getting things done as a citizen, but no one would listen to me,” he says. After serving a year as a city councilman, Wales ran against “a really lousy mayor and beat him in a landslide.” Wales served as mayor for three terms before deciding he’d accomplished what he set out to do and moved on.

Today Wales is the director of Refugio County Museum. He’s also on the boards of several nonprofits, the Texas Tropical Trail Region, and the local historical commission. “On weekends,” he says. “I work at Home Depot as a kitchen designer, so I can make money to do all those other things.”

But first and foremost, Bart Wales is a son. “My dad’s in hospice, and he lives with me. That’s my primary concern right now.” His father was raised in Refugio, making Wales a sixth-generation Texan. “My mother’s side of the family were newcomers because they didn’t get here until the 1890s,” he jokes. Wales grew up immersed in his grandparents’ stories about Refugio.

“Somehow I became the local historian,” he says. “Every time someone has a question about Refugio’s history, they look for me.” It was a natural fit for Wales to step up as director of the Refugio County Museum. “With my background in architecture and interior design,” he explains, “I’d always enjoyed helping the museum and coming up with ideas for exhibits.”

And the museum needs help now more than ever. Hurricane Harvey damaged nearly every building in Refugio. “We’re still waiting, patiently and impatiently, for a roof over the museum,” Wales says. “We still put out buckets when it rains.”

Some of the artifacts were damaged during the storm, but restoration is expensive. “You can’t just send uniforms to the cleaners,” he explains. “The fumes and chemicals will cause old photographs and documents to deteriorate.” It’s a delicate process, making sure the changes made to one artifact don’t cause problems somewhere else in the museum. Wales thanks the Texas Historical Commission, “which pays attention to the small communities,” for access to basic restoration training.

Among the wreckage of Harvey, Wales reminisces about Refugio’s prime. “I know the great moments Refugio’s had in the past, when the citizens were very active,” he says. “If the town needed something, they’d take care of it.”

In the early 1900s, Refugio was a powerhouse in the cattle industry. “There were about 800 people, and every eighth person was a millionaire,” Wales says. When oil was discovered in Refugio, “the town started doing great things: building a new city hall and paving the streets in concrete.” Refugio has since lost many of the old families who generated that wealth. “I’m surprised,” Wales says. “You need to remember where you came from.”

Those who’ve remained are still shaken by Harvey. “It’s harder to get help now,” Wales says. “When we talk to people about any new projects, they’re cautious.” One of the biggest challenges is housing any incoming workers or volunteers. “The main apartment complex is closed because it hasn’t been restored itself,” Wales says. Recently Refugio was allocated $1.4 million in funds specifically for restoring the apartment complex where so many blue-collar workers and their families lived. Which is good news for Wales’ next project: an interpretation of the last mission the Spanish established in the state of Texas.

Wales is on the board of Los Amigos, the friends of Our Lady of Refuge mission. “We just got our nonprofit status,” he says. The old church was built in 1775. “We’re trying to create an interpretation of the mission to inform people about that part of our history. The foundation of the old mission is under Highway 77, right in the middle of town.”

Given all of the other Harvey repairs the town needs, Wales is trying to secure an endowment for the new project as well as funds for the construction. “I don’t want this to be a burden on the community,” he says.

Information about the mission comes from two local historians: William H. Oberste and Hobart Huson. Oberste was a Catholic priest who wrote several books about the mission, including some details about the original church dimensions. His findings aligned with what was discovered about the actual foundation when Highway 77 was dug up for renovation, prompting an archeological dig of the mission’s original site. “It’s amazing,” Wales says, “when everything starts falling into place.”

“Art tells history,” Wales says. “We collect things because we want to preserve them for the future. There are a few of us all over the world — custodians.”