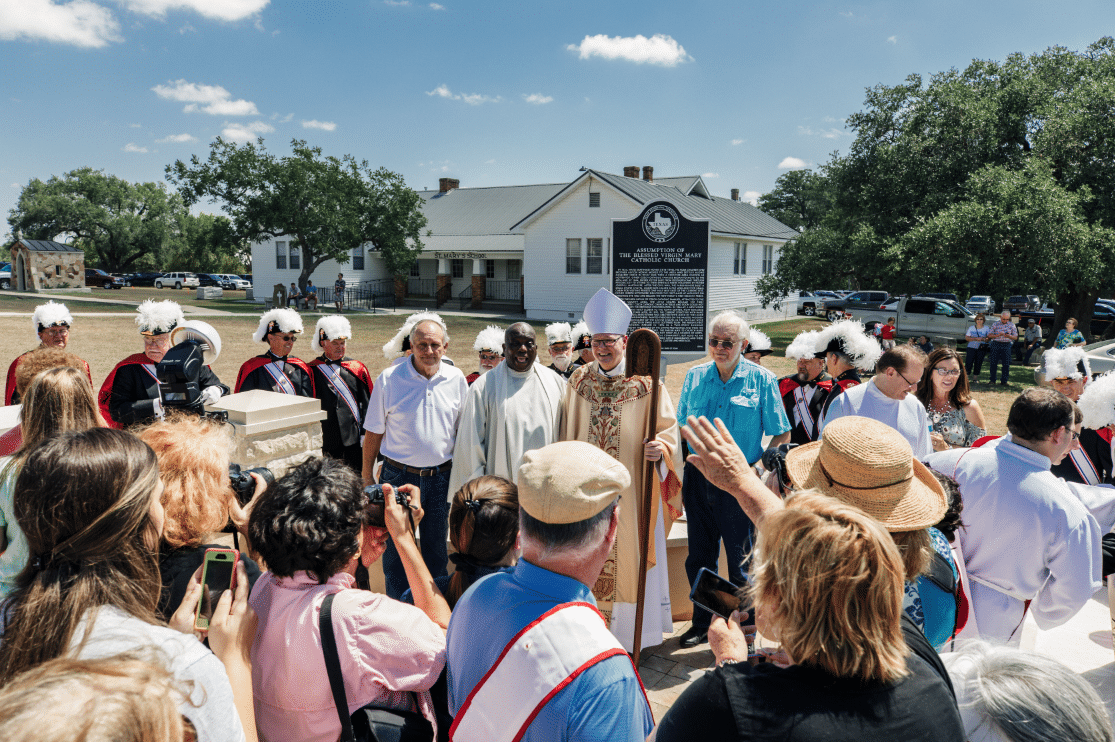 News of the church dedication trumpeted from the front page of the local paper: “The little village of Praha, in this county, was the scene of the grandest affair in its history yesterday,” announced a November 1895 issue of the Weimar Mercury. “The occasion was one long to be remembered by those participating.”

Nearly 122 years later, the news was similar. Praha’s St. Mary’s Church of the Assumption — now revered as one of Texas’ iconic Painted Churches — hosted a dedication event for the unveiling of its Texas Historical Commission official marker. Scheduled as part of the church’s annual picnic, which regularly draws thousands of attendees, the marker ceremony provided a fitting reflection of the 1895 event celebrating this faithful landmark on the rolling prairie of southeastern Texas.

St. Mary’s Church of the Assumption is also historically significant because of its rural nineteenth-century Gothic Revival style and its distinctive interior painting. Originally established in 1855 by Czech settlers, St. Mary’s was the first Roman Catholic church between San Antonio and Houston. (The community of Praha is located near Flatonia.)

Since then it’s played an essential role in the community’s social and cultural scene. Every year on Aug. 15, the Prazka Pout (“homecoming”) celebration is held on the church’s picturesque grounds. St. Mary’s is reportedly the only Roman Catholic church in the country to host such a custom.

At the marker dedication, officials from the church, community and Texas Historical Commission gathered to honor St. Mary’s extraordinary impact. A large crowd cheered as the marker was unveiled and speakers praised the congregation and its significance.

“St. Mary’s is a destination for local parishioners and heritage travelers who find comfort in its traditional iconography and welcoming sense of place,” said Bob Brinkman, TCH Marker Program Coordinator, following the ceremony. “One can immediately feel the church’s remarkable history upon entering its massive front doors. St. Mary’s is indeed a Texas treasure.”

According to St. Mary’s National Register file, the church’s beautiful interior was painted soon after the building was completed in 1895. It’s rare to find these types of architectural and plant forms depicted with such a skillful use of freehand trompe l’oeil techniques — using realistic imagery to create the optical illusion that the painted objects exist in three dimensions. Of particular visual interest is the painted flora (potentially representing Paradise) in green and blue hues among rose, white and yellow blossoms.

The ceiling artist was Gottfried Flurry, a Switzerland native who immigrated to the United States as a 17-year-old in 1881. Flurry painted scenery in New York theaters before moving to San Antonio in 1891, where he became known as a painter of church murals and frescoes. St. Mary’s is one of the few remaining structures that displays his work.

“It’s rather inspiring to think that congregation members have been gazing upon this same sacred artwork for more than a century,” Brinkman observed. “As was reported all those years ago in the local newspaper, ‘The church is a fine structure, built of rock and will last for all time.’”