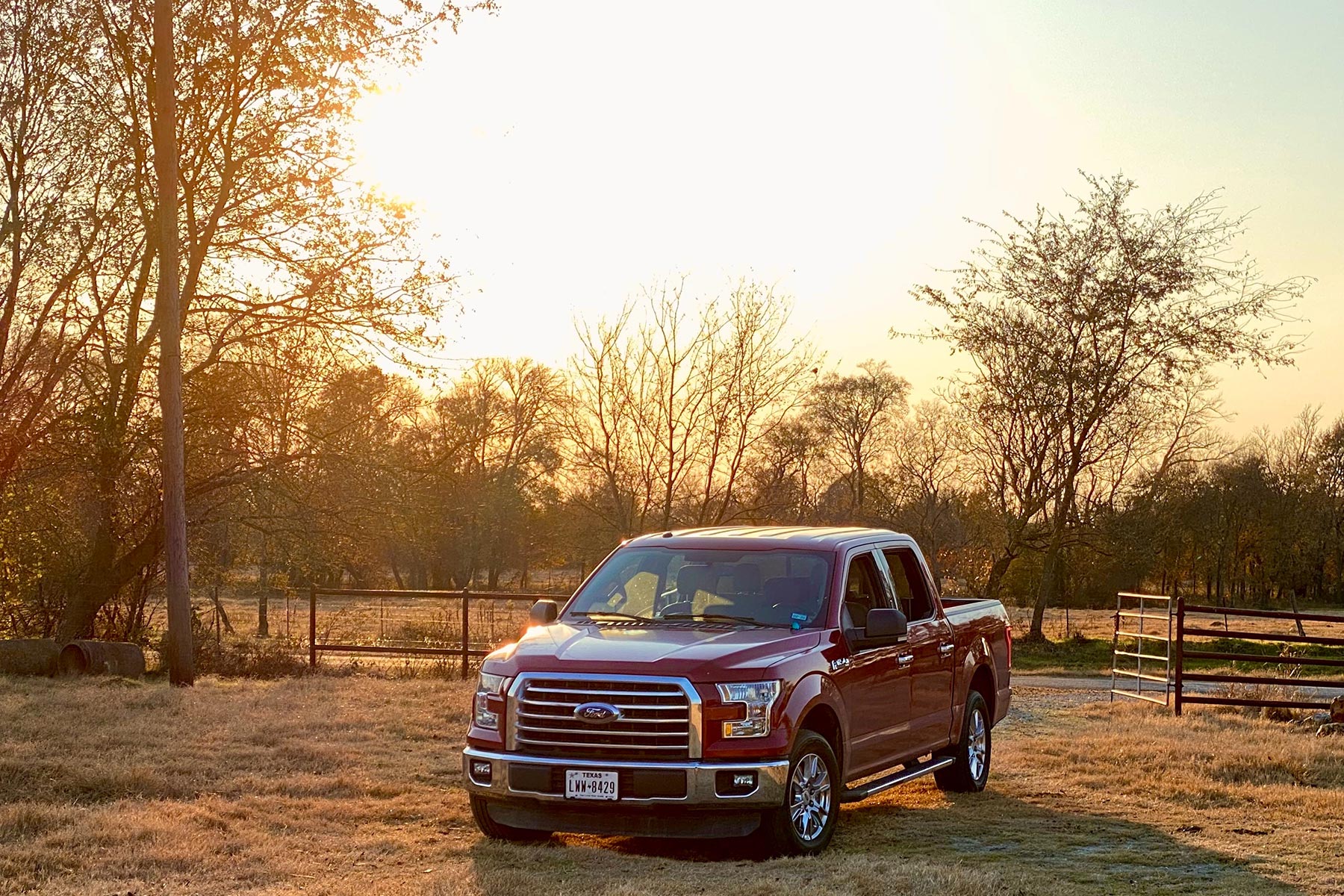 Get Your Motor Running

“We love to start the day with a ride in the pickup truck . . . And we never take the same road twice on the way back home.”

I never picked myself for a pickup driver.

Not back in the day, back in the Atlanta (Georgia, that is) suburbs when I learned to parallel park in our honkin’ Country Squire wagon or helped my dad rebuild the carburetor on a tailfin Caddy handed down from his brother. And certainly not when I donned my best bowtie blouse, business suit, and pumps to go sign solo on the dotted line for a custom-ordered Corolla from a Betty Goodeal–branded Toyota showroom in 1987.

Two decades later, finding myself a transplant to Texas Tech, I still didn’t quite grasp the obsession with the King Ranch Fords and Texas Edition Chevys wedged into campus slots like Luke Bryan in his Diesels.

On the plane out to Lubbock I’d plowed through the final installment of Larry McMurtry’s Thalia trilogy that launched with The Last Picture Show.

“When you ride in a pickup truck,” the title character tells his wife, Karla, in Duane’s Depressed, “you don’t really see anything but the pickup—and I’ve done that nearly all my life.”

Well, then. Duane parked his signature truck for good and started hoofing it around town, and everybody thought he’d gone daft. I didn’t get why that was such a radical move.

Before too long I had the opportunity to visit another legend of the Lone Star State, the State Fair in Dallas. It so chanced that on my way to discover Big Tex I wandered into a side plaza. More like a temple to truckdom, its entry pillars lofting full-sized models a hundred feet into the air. I had entered the Truck Zone.

Did I care to test-drive a Tundra? They’re made right there in San Antonio, explained a toothsome young sales associate wielding a clipboard.

Did I happen to own a Chevy truck? asked the pitchman in the next booth. If so I could share my devotion via an entry in the Drive It Forever contest.

Did I want to try a Chevy truck? Step right up. Turns out I could test everything from the Volt to the Corvette right there at the fairgrounds. The State Fair of Texas is the only fair in the U.S. to include a full auto show, a tradition dating back to 1913, and today it’s the largest new-model show in the Southwest.

Okay, I was game.

I came away a Silverado convert after the tricked-out 4×4 effortlessly clambered over the course’s rockpile. The best thing about the experience of its luxury cab, I discovered, was the feeling of utter superiority gained from gazing so far down on the humble Impala and the invincibility of a half ton of high-strength steel.

I did my homework. Texans, it turns out, purchase more pickup trucks than customers in any other state.

Of course they take them on cattle roundups, out in cotton rows, and across caliche-lined creeks just like in the commercials, but they also drive them on Dallas tollways and park them in tract-home double garages. Their cargo beds carry Gebo’s lockboxes and Trip Hopper feeder rigs, but also soccer gear and dorm furniture and junktique finds. Their hitch balls haul horse trailers and teardrop campers and barbecue smokers. Their cabs carry oilfield crews, homecoming queens, infants in onesies, teens with learners’ permits, deer hunters, executives in Luccheses (and that’s the women), geezers in pressed Wranglers.

The only two absolute requirements are sufficient headroom for the Stetson to clear when one steps into the driver’s seat, and deer whistles. More anon about the deer whistles.

So the Silverado beckoned, but ultimately the F-150 sucked me in. After a series of unfortunate events in the SUV involving roadside wildlife, I vowed the next vehicle would be tall enough to clear any obstacle as effortlessly as those artificial rocks on the State Fair test course—and sport a grille guard.

Now, I realize there’s not a lot of Lone Star romance, or power, or even personality in this new-to-me pickup. She’s just garden-variety. Ford made over a million F-series in 2018; the automaker sells two per second worldwide. And I do realize that the Dodge Ram outpaced the Ford in the Texas Truck Rodeo the following year, and that there are lots of other choices besides.

This pickup could never exude the nostalgic cachet of a bumpside rusting in a stand of bluebonnets, or the cool factor of a sleek lowrider on the backstreets, or the sheer authority of a lift-kit monster.

But heck, if I needed to call the company about anything, I might even connect with the new call center right down there in Houston that would soon add 500 Texas jobs. Service after the sale. Cradle to the grave, you can count on Texas truck loyalty.

These days, when I go to Lubbock, now an hour-plus jaunt from the hinterlands, I can proudly squeeze in beside all the other full-size pickups and carefully sluice out onto the running board to avoid denting my neighbor’s door. I can stow the MacBook in the console, set my Yeti cup into its holder, stash a load of Market Street groceries and McPherson wines in the back floorboard, return with a full cargo bed’s worth of Home Depot materials and enjoy the satisfying clang when I shut the tailgate. I can head home taking the two-lane at eighty, holding my own on the road.

Because I’m a pickup driver.

And that makes me a true Texan.