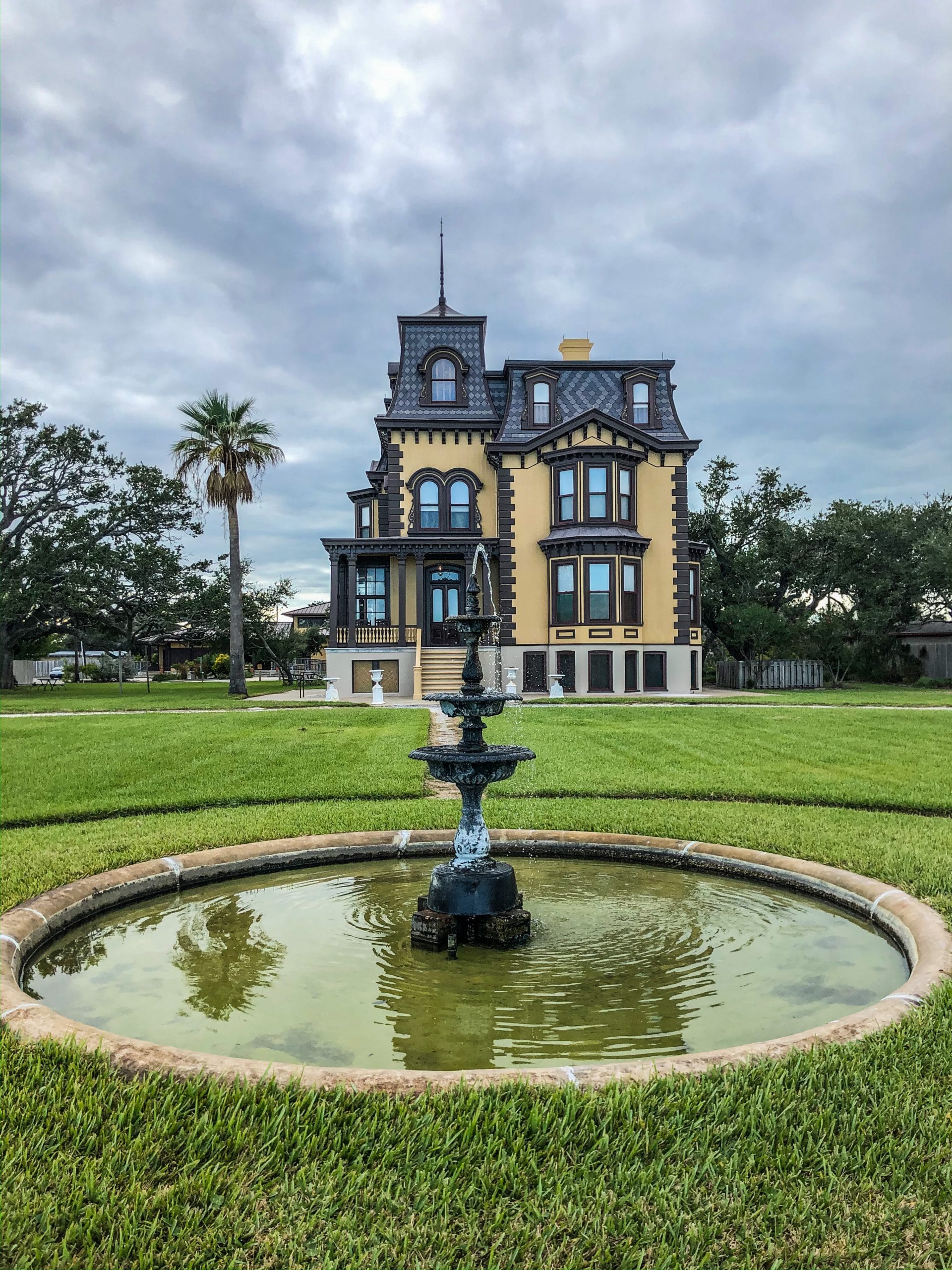 A Site to Behold

Sitting prominently along Aransas Bay in Rockport, the Fulton Mansion has stood tall and majestic since 1877. George W. Fulton, who created a ranching and meatpacking empire while shipping cattle tallow and hides to New Orleans during the 1870s, built the grand home. Starting in 1874, Fulton spent three years designing and constructing the mansion he called Oakhurst, named after the windswept oaks surrounding the property. The area around the Fulton Mansion State Historic Site has changed significantly over the past 150 years, but not the unique, French-inspired mansion with the slate-patterned mansard roof.

Extremely impressive on the outside, the mansion continues its luxurious feel on the inside, from the amenities to the furnishings. Crystal chandeliers, imported from New York to London, light the home with timeless style. The gas lighting, indoor plumbing, and central air and heating systems were all unknown amenities to South Texas when the home was built. Artwork throughout the mansion reflects Fulton’s love of nature, and even the hardware is extensively engraved, right down to the door hinges. Plaster medallions adorn the ceiling above the chandeliers and gas lighting fixtures.

Tours begin with interactive exhibits and audio presentations at the Fulton Mansion Education and History Center, which also hosts live music and lectures. D.J. Chilcoat, a volunteer docent extraordinaire, remembers multiple guided tours running concurrently to accommodate visitors.  Today, self-guided tours cover the garden, basement, and first and second floors of the mansion. “The basement showcases the inner workings of the mansion,” said Chilcoat. “Sometimes, it can be hard to coax people out of the basement for the rest of the tour.”

When you step through the huge wooden pocket doors into the parlor, the wall-to-wall carpet and massive wooden mirror on the mantle grab your attention. Formal parties, social gatherings and special family events like Christmas were held here. You can also put a face to Harriet and George Fulton through their photographs on the parlor walls.

Across the hall, the family gathered and luxurious dinner parties were held in the dining room, which includes adjacent bay window seating. The dumbwaiter in the butler’s pantry brought up delicious creations from the basement kitchen. Plenty of family members came to visit, with 16 grandchildren born between the four Fulton children.

After dining, gentlemen gathered in the next-door library after dining, which doubled as George’s office. Another huge mantle mirror sits above one of the nine fireplaces, none of which were wood burning, but delivered heat from the basement furnace. George’s original chess table stands out among the many treasures. “The chess table and pieces actually belonged to George, like other items donated back to the mansion,” Chilcoat said.

All of the bedrooms are upstairs. The horsehair chairs and lack of ceiling medallions were acceptable for family bedrooms, but certainly not fancy enough for the guests. In fact, Harriet spent more money on the guest bedroom than on her own master bedroom. In the master, Harriet tended to household business and regularly wrote love letters to George, who died in their large canopy bed on October 30, 1893, at age 83.

The mansion has two-and-a-half bathrooms with hot and cold running water, three flush toilets and a septic tank. Rainwater filled huge basement cisterns for drinking water, and a thousand gallons were pumped back up into the tower cistern. Gravity fed the toilets, sinks and copper-lined tubs. Other interesting exhibits are the toilet roll holder and onionskin toilet paper.

The exhibit room was purposely left unrestored to highlight the condition of the mansion before restoration and other hidden attributes of the structure, such as horizontally stacked pine boards that created five-inch-thick wooden walls and floors. Construction tools and diagrams of the mansion’s innovations are also displayed.

Over the years, the Fulton Mansion has served as a private residence, a restaurant and even a backdrop for a trailer park. The RV Park remained in operation under different owners, until Texas Parks and Wildlife paid $150,000 to rescue the dilapidated mansion with cigarette tax funding in 1976. Between 1979 and 1983, the mansion was restored, and furnishings and fixtures from the 1870s were added.

Today, the Fulton Mansion State Historic Site is managed by the Texas Historical Commission (THC) and supported by the Friends of Fulton Mansion. The 6,200-square-foot mansion takes funding to stay well preserved as a Recorded Texas Historical Landmark. The mansion underwent a second, intensive $3.1 million restoration from 2013 to 2015.  Hurricane Harvey hit the mansion in August of 2017, leading to another restoration that was finished in 2019.  George originally built the mansion in 1877 for $100,000—equivalent to $2.2 million today.

“We couldn’t have reopened without the support from this community and many individual donors,” said Mark Wolfe, executive director of the historical commission, in a THC news release. “The Fulton Mansion is ready to educate and entertain visitors and continue its positive impact on Aransas County and the Coastal Bend.”

After withstanding multiple hurricanes, termites, constant basement flooding and other issues, the Fulton Mansion stands triumphantly nearly 150 years after it was built, poised to educate generations to come.

Advance reservations are required to take a tour inside the historic house. Please call in advance to purchase tickets.