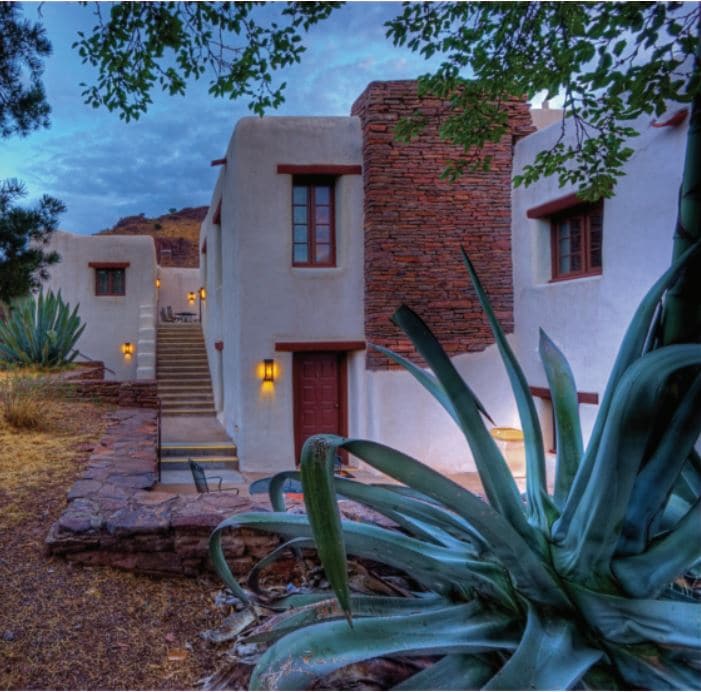 For hundreds of years adobe brick structures have painted the arid desert landscape of the Southwest. The arrival of the Spanish to the region in the mid-16th century brought a tradition of adobe construction that was then combined with the adobe building method of Native Americans that occupied the land long before the arrival of the Spanish. The confluence of the two styles created the iconic mission-style adobe brick architecture synonymous with the area today.

“Adobe brick is found in several parts of the world,” says Quentin Wilson, director emeritus of Northern New Mexico College’s Adobe Construction Program and a specialist in adobe design and construction. “It stands forever if it has a good foundation.” While adobe structures can be found around the globe, most relatable to Texans are the adobe buildings found in the southwestern and central regions of the state as well as upwards toward the Panhandle.

Although associated with colonial Spaniard settlements in the Americas, the history of adobe brick spans long before the 16th century. The building method of erecting structures using sun-dried mud to practiced a similar style of using brick made from dry mud as a building material as far back as 1,000 years ago.

The word “adobe” has existed for roughly 4,000 years without much change to the pronunciation or meaning. Adobe originated as a word translating to “mud brick” in the Ancient Egyptian language around 2,000 bc, making its way into the Arabic language, then integrated into Spanish and later adopted into English in the early 1700s — a linguistic voyage of the word that simultaneously followed the geographical journey of the construction method.

The Spanish were introduced to adobe during the 8th century when the Moors in make brick is among the oldest techniques discovered by archeologists in almost every part of the world. Historical evidence traces adobe construction methods to as far back as 4,000 years ago with the ancient Egyptians, where structures out of brick can be found along muddy riverbank areas.

Another area where sun-dried adobe structures have been found is Middle Eastern regions of the Arabian Peninsula and Mesopotamia, which date to as far back as the beginning of modern human history. Native inhabitants of the Americas also northern Africa made their way across the Strait of Gibraltar, where only nine miles separate the two continents, bringing along with them the early brick-making method. The colonization of the Americas by the Spanish Crown began with Columbus arriving in the Caribbean in 1492, then voyaging into present-day South America, Central America and parts of North America.

The missions built around Texas beginning in the 1600s served to convert Native Americans to Catholicism, with many of the buildings later serving as fortresses in battle. In the following centuries, the merging of the two cultures contributed to the amalgamation of Spanish and Native American methods of making adobe brick and dispersion of the unique architecture that can still be found in those regions today, including in Texas.

Found in traditionally arid climate regions around the world, adobe brick is created by using ample amounts of sun and dry air in desert areas to bind the substances used in transforming the mixture into a stable building material. Depending on the location and environment, the specific soil material used to make adobe will vary; but the process of creating the brick has remained relatively unchanged for thousands of years.

Adobe is a brick made essentially out of dried mud. To make the brick, one combines natural elements of earth materials — such as clay, sand or other dirt-textured substances — with water and a stabilizer of either grass or straw. The amount of water needed to create the adobe is a vital component that lends to the resilience of the material: an over-abundance of water will transform the mixture into a combination too wet to hold, yet if there isn’t enough water, the mixture won’t properly join to create a stable brick. From there, the mixture can either be left to naturally bake in the sun until completely dried or can be fired in an oven or kiln. Kiln-fired brick is a popular modern-day method to mass-produce commercial adobe bricks, although purists may refer to this type of product as “clay bricks” to distinguish between the two types.

The most common way of making adobe brick used in the southwestern part of Texas — and the world — is the sun-drying method. Traditional adobe bricks require anywhere from two weeks to a month of sun to completely dry and be dependable for use. The custom of building with adobe brick in Texas was most popular beginning in the 1600s and lasting through the 1800s. Some buildings are still standing due to the resilience of the brick withstanding the test of time when maintained properly.

Adobe served as the ideal material to construct edifices and is still praised today for its many positive attributes. As load-bearing structures, adobe brick walls carry their own weight evenly into the foundation. Along with being reliable and composed of inexpensive materials, adobe is a remarkable regulator of temperature that moderates the building throughout the harsh, blistering heat of the scorching days and the crispness of the desert nights. The thermal insulating capabilities of adobe brick allow the structure to absorb heat during the daylight hours, cooling the interior of the building, then slowly disperses the heat as the temperature drops while time passes.

Adobe brick also has a low carbon footprint given that there’s no need to use natural resources, such as natural gas or coal, nor any energy expenditure to produce the final product. “The largest energy input is solar,” Wilson says, “followed by human metabolic energy.”

Adobe brick possesses a natural propensity to constantly deteriorate over time when exposed to excessive moisture, animals or plants. When correctly maintained, adobe brick serves as a long-lasting medium of construction. Guidelines established by preservationists at the National Park Service of the U.S. Department of the Interior to maintain adobe brick can be found in the Preservation of Historic Adobe Buildings (Preservation Brief 5). The brief, published in August 1978, states that, “Cyclical maintenance has always been the key to successful adobe building survival.”

A keen eye, along with continuous upkeep, is what’s kept the numerous surviving adobe brick structures in Texas resembling when they were first built. One example of a well-constructed adobe brick establishment still in service is the Ysleta Mission in El Paso. Originally founded in 1682, the mission is recognized as the Lone Star State’s oldest continuously operating reli- gious building. The parish is located in the Ysleta community, which was established by members of the Tigua tribe that followed Spanish colonists retreating southward from the Pueblo Revolt in Ysleta Pueblo, now known as Albuquerque. The community and the mission derived its name from the original ancestral home of the tribe.

The Tigua people built a permanent structure out of adobe brick and dedicated it to Bishop Salpointe of Tucson, named La Misión de Corpus Christi de San Antonio de la Ysleta del Sur — after their patron saint, Saint Anthony. In 1829, the Rio Grande flooded, washing away the church, which was then remodeled in 1897 and again in 1908 after a fire incinerated much of the building, including the bell tower used at the time to store chemicals to repel bats. After the final restoration of the Ysleta Mission in the early 20th century, the adobe brick structure appears much how it looked back then and is listed in the National Register of Historic Places by the National Park Service.

Earth, grass, water and sun — four common elements that have been used to lay the foundation of societies around the globe for millennia. The 16th century saw the onset of the adobe brick construction method with the arrival of the Spanish conquistadors, who learned their technique from the Moors of Northern Africa who’d invaded Spain in the 700s. Adobe brick is one of the most antiquated building materials discovered by archeologists and serves as a physical representation of the beginnings of Texas history that people can still experience.

Attentive care and unremitting restoration efforts have kept many of the adobe brick structures around Texas and the world alive. The structures continue to educate individuals about Texas’ history and contribute to architectural discovery and cultural preservation.

Adobe brick is intertwined with the heritage of the southwestern region of the state, showcasing a mixture of Native American and Hispanic cultural identities that many Texans have proudly claimed for centuries.