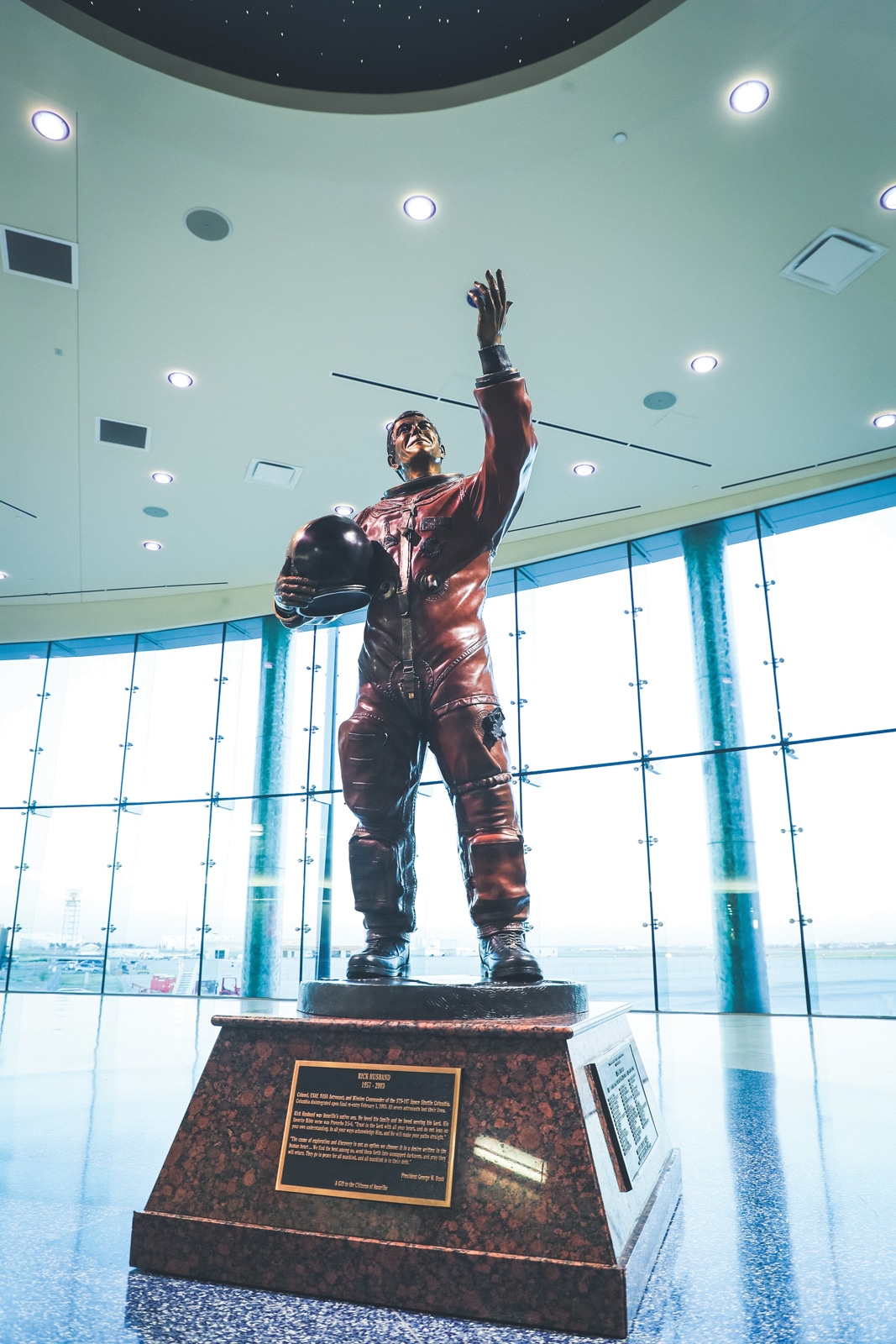 REACH FOR THE STARS A bronze in Amarillo’s international airport memorializes the city’s native son, astronaut Rick Husband, who perished along with all of the crew of the shuttle Columbia on February 1, 2003. | Rick Husband Amarillo International Airport
0 Shares
0

While most of Authentic Texas’s “Trail Drives” follow auto routes, this one may best be accomplished by taking to the air. Instead of looking for a friend to ride drag you may want to find a wing man.

Lots of Texas history is linked to aviation, and particularly to airport passenger terminals across the state. So make note if you find yourself with a layover in some of Texas’s commercial passenger airports. (Or take to the skies yourself, if you are one of Texas’ 86,000+ active FAA-licensed pilots.)

The oldest link on the trail is in San Antonio. Stinson Field, now Stinson Municipal Airport, is the second oldest continuously operating airport in the nation and the oldest west of the Mississippi. Founded in 1916 when the Stinson family established their flying school, it became San Antonio’s first municipal airport. Still a general aviation (private aircraft) airport with a beautiful WPA terminal dating from 1935, Stinson is located along the city’s Mission Trail, between Mission San Jose and Mission San Juan Capistrano, just 16 miles from its much larger cousin, San Antonio International Airport. Also, it is home to the Texas Air Museum at Stinson Field. And don’t forget San Antonio’s link to military aviation, starting at Fort Sam Houston in 1910. What a great first stop!

The 1940 Air Terminal Museum in Houston is the beautiful building you see flash by when landing or departing on a scheduled commercial flight at Houston’s William P. Hobby Airport. It’s on the west side of the airport along runway 13R/31L. It’s a beautiful Art Deco building where Braniff Airways and Eastern Airlines passengers landed or departed starting in 1940. With regular operating hours, lots of permanent displays, and a great website to help plan your visit, you may want to schedule a morning or afternoon layover the next time you fly through Houston Hobby. Just step outside to the public transportation area to get a taxi or a ride service for the short ride to the museum.

Amarillo’s Rick Husband Amarillo International Airport makes the list because of its namesake. Husband was an Amarillo native, an astronaut, and commander of NASA’s STS-107 mission in 2003. The space shuttle Columbia was the crew’s home for sixteen days as they conducted more than eighty experiments. Tragically, Columbia disintegrated on re-entry to Earth’s atmosphere on February 1 as it passed over Husband’s home state. Many pieces of the shuttle were found strewn along its flight path over east Texas. All the crew perished.

Find a small display in the main ter- minal recounting Husband’s life and his career at NASA. It is right next to the main ticket counter. Don’t miss the larger-than-life statue of Husband located in the terminal’s general waiting area with the starry-sky ceiling above his out-stretched arm. Then, turn around to see the Airport Art Project featuring local and regional artists. It’s all in the terminal’s public area—no need to worry about clearing TSA security.

Every Texan who flies probably has changed planes at Dallas’ Love Field at some point in their life; some are there several times a week. It certainly has the legs to be a historic landmark. Founded in 1917 as an army air base and transitioned into the city’s main airfield until the 1970s, it may be best known for a couple of events linked to its past.

Love Field was the location for Air Force One in 1963 when then–vice president Lyndon B. Johnson took the oath of office after the assassination of President John F. Kennedy. Just ten years later, Love Field was the focus of legal and political battles over the development of the new Dallas/Fort Worth International Airport. Fledgling Southwest Airlines refused to move to the new airport. Over forty years later, thanks in large part to Southwest, Dallas Love Field is one of the busiest airports in the nation, and Southwest is a major force in the American travel industry. (For a more in-depth history of Love Field, see page 40.)

A state historical marker at the intersection of Herb Kelleher Way and Aviation Place outlines the story. And don’t miss the Frontiers of Flight Museum, located at Love Field.